Sergey Kovalev focused on Eleider Alvarez, but his goal is 175-pound title unification 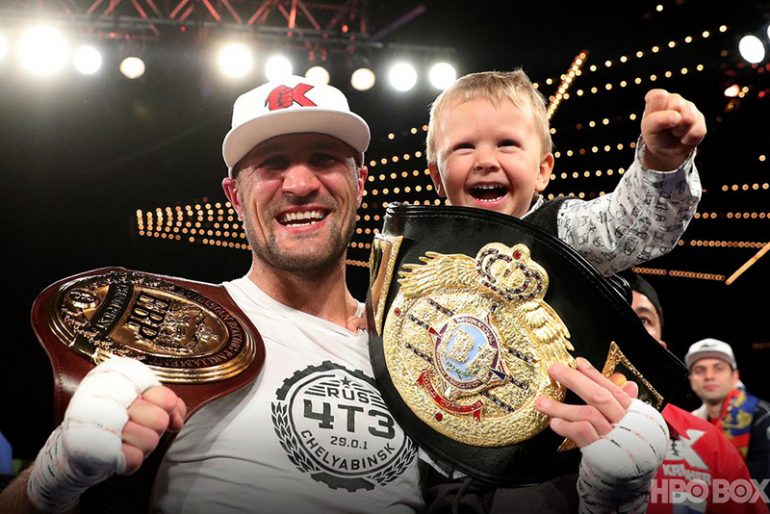 Photo / @HBOBoxing
12
May
by Joseph Santoliquito

NEW YORK, N.Y. — Every once in a while the steel veneer cracks and a smile will cross Sergey Kovalev’s face, as it did more than a few times Saturday afternoon at the Hard Rock Café in Times Square. Kovalev (32-2-1, 28 knockouts) gets to fight again.

“The Krusher” and Main Events, his promoter, pulled out all of the stops in announcing Kovalev’s WBO light heavyweight title defense against Eleider “Storm” Alvarez (23-0, 11 KOs), on August 4, at Atlantic City’s Hard Rock Café on HBO. Alvarez, 34, has been waiting for a chance to fight WBC titleholder Adonis Stevenson, like Kovalev, and since a fight never materialized, the two decided to fight each other.

The fight wears an interesting moniker, “Super Men,” a play off the Kovalev and Alvarez’s nicknames, and in some ways, a knock at Stevenson, whose nickname is “Superman.”

“My next fight is Alvarez and I’m not thinking of someone else [Stevenson], so I can set my concentration on Alvarez,” Kovalev said. “This is not an easy opponent. It’s not in my rules to think about something else, when I have someone dangerous in front of me.

“Who knows how dangerous, and everyone has a plan before the first punch. I could be looking impressive, because my new chapter in my career should prove I deserve a unification fight. It’s my goal for an impressive fight. I will of course be watching the Badou Jack-Stevenson fight. I don’t care who wins. That is not my concern, because my focus on Alvarez.”

Kovalev saw Alvarez fight once, against Isaac Chilemba, a 12-round Alvarez majority decision win. He said he’ll wait and see what he faces to determine how he’ll attack his opponent.

“I will test this guy, and why Stevenson avoided this guy on August 4,” Kovalev said. “After the two losses to [to Andre Ward], I recharged mentally and I’m ready. My body and my heart recharged and I got rid of a lot of mistakes in my life and my boxing life. You already saw the mistakes gone from my last fights.

This will be Kovalev’s return to Atlantic City for the first time since one of his signature victories, since he beat Bernard Hopkins in November 2014.

Alvarez is a very credible Plan B, after the originally planned fight against contender Marcus Browne fell through when Browne was faced with misdemeanor domestic violence charges.

“I’m excited to get another chance to fight for a belt,” said Alvarez, who’s from Colombia, but lives in Montreal, Quebec. “It’s three years waiting for this. I want to focus on the future and not the past. I’m fighting one of the best. Kovalev said Stevenson doesn’t want to fight three times out of fear and I think about that.

Beating Kovalev will be Alvarez’s biggest challenge. In person, as of mid-May, Alvarez seems like the bigger man.

“I can’t see any weaknesses with Kovalev,” Alvarez said. “I have a classical boxing style and I think I’m really good at close and large distances, and I have a powerful jab. This is a great opportunity. I waited three years for Stevenson to fight for a world championship, and now I have this opportunity and it means more.

“Kovalev is a great champion, and in my opinion, he’s the best in the world at 175 pounds. The world will find out who Eleider Alvarez is. I will show everything that I’ve been through throughout my career, but after August 4, HBO is going to have a new champion. This will be a difficult fight, but I know what I can do and I know I’m going to be the new champion.”

While Alvarez wore a stern expression through much of the packed presser, Kovalev played with his phone and on occasion flashed a smile.

If he had any concerns about the Colombian expatriate, he didn’t show it.

“I can’t look by [Alvarez],” Kovalev said. “I’m sure this will be a really great fight. I have a plan to defend my title, and he has a plan to get a title. It will be a big battle. I’ll be ready and be in the best shape of my life.”

That’s when the fire alarms of the Hard Rock Café began going off.

But Kovalev kept going—and it wound up being a false alarm.

Hopefully, Kovalev-Alvarez won’t be a false alarm—and Alvarez can give The Krusher a competitive fight. The Colombian light heavy certainly looked ready in mid-May.