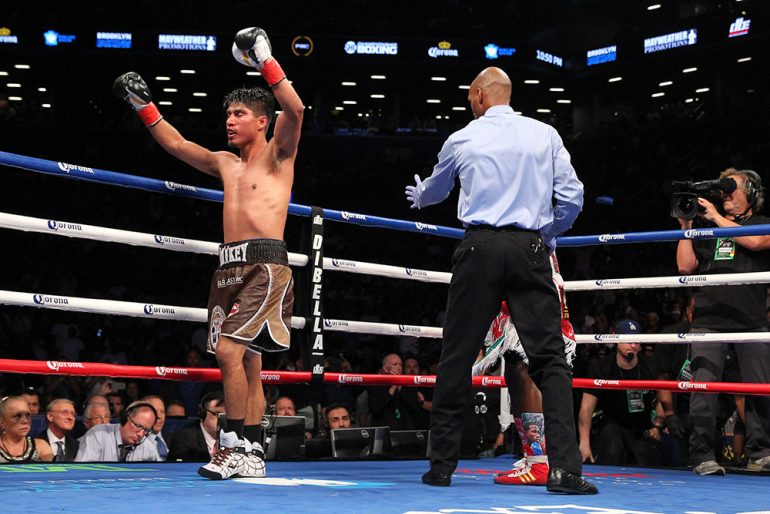 12
May
by Mike Coppinger

While Jorge Linares defends his RING lightweight championship bout on Saturday against Vasiliy Lomachenko, the other two best fighters in the division will meet to unify titles months later.

Mikey Garcia, who holds the WBC lightweight title, and IBF beltholder Robert Easter Jr. agreed to meet in a unification matchup on July 28 at Staples Center in Los Angeles, sources with knowledge of the talks told THE RING. Super middleweight titleholder David Benavidez will defend his belt in the other half of the Showtime Championship Boxing doubleheader.

The sources requested anonymity because they’re not authorized to speak publicly on the matter.

Garcia (38-0, 30 knockouts) hasn’t competed at 135 pounds since he won the title with a spectacular third-round knockout of Dejan Zlaticanin in January 2017.

The undefeated fighter from Oxnard, California, jumped up to junior welterweight for a high-profile showdown with Adrien Broner months later, and then grabbed a title in a fourth-weight division with a decision victory over Sergey Lipinets in March.

Now, Garcia, THE RING’s No. 5 pound-for-pound fighter, will meet his biggest test at lightweight while he looks to become a unified champion for the first time.

The 30-year-old relinquished his 140-pound belt to continue defending his 135-pound title, and now he’ll seek to add to his collection of belts.

Easter (21-0, 14 KOs) looked shaky in a split decision win over Javier Fortuna in January, but the Toledo, Ohio, native will boast a considerable size advantage (five inches in height, eight in reach) and packs a punch.

The 27-year-old has reeled off three title defenses since he won the vacant strap with a decision nod over Richard Commey in one of the best fights of 2016.

Easter will step way up in competition for this fight, and on his biggest stage yet. It will be his first headline bout on Showtime, and he’s finally facing an elite fighter.

Ideally, the winner of Saturday’s bout on ESPN between Linares and Lomachenko will meet the victor of Garcia-Easter (THE RING’s No. 1- and No. 2-rated lightweights, respectively) to determine lightweight supremacy, but it’s a long shot for 2018.

Linares, after all, is promoted by Golden Boy and aligned with HBO, while Linares is with Top Rank/ESPN. Garcia and Easter are both advised by Al Haymon and fight on Showtime.

But if Linares-Lomachenko is any indication, the promotional divide can be bridged, and just maybe, we’ll crown an unquestioned top dog at lightweight in the near future.