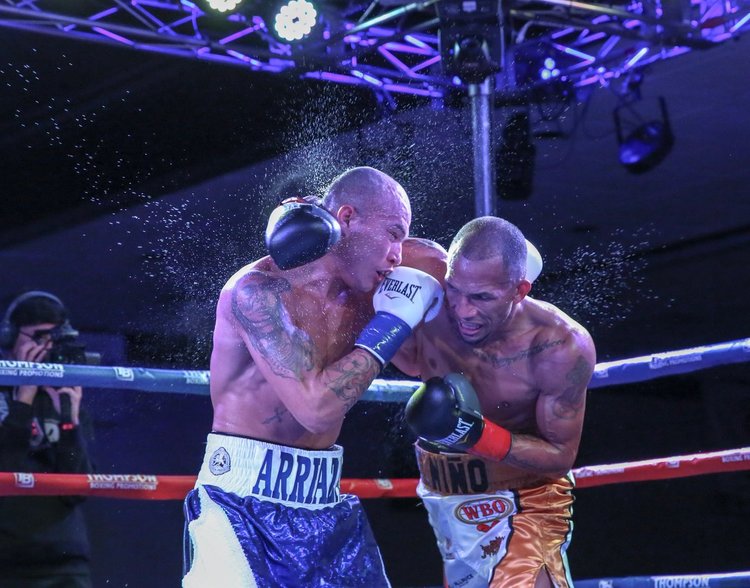 Photo courtesy of @thompsonboxing
12
May
by Francisco Salazar

He may not have won by knockout in the first round, but welterweight contender Roberto Arriaza will take a decision win any day.

After notching three consecutive first-round knockouts, Arriaza was taken the distance by fringe contender Juan Ruiz, before claiming a 10-round unanimous decision Friday night at the Doubletree Hotel in Ontario, California. Scores were 99-91, 98-92, and 97-93.

Arriaza, who is originally from Masaya, Nicaragua, and now lives and trains in the Los Angeles area, knocked out Sammy Valentin in just 20 seconds in his last bout on Mar. 16. However, instead of coming out aggressively, the unbeaten power-puncher fought at a more measured pace this time.

For the most part, the 28-year-old Arriaza (17-0, 13 knockouts) walked Ruiz down during in the first half of the fight. By way of response, Ruiz, who was knocked out by prospect Alexander Besputin in November, would jab or throw a one-two combination to keep his opponent honest.

Arriaza had his best round in the seventh, becoming more aggressive and assertive, while forcing Ruiz to fight off the ropes. Ruiz had his moments during the final two sessions, but he was unable to change the course of the fight.

Ruiz who is originally from Venezuela and now resides in San Diego, drops to 20-2, 12 KOs.

Carlson (22-4, 13 KOs), who lost to then-WBC bantamweight titleholder Shinsuke Yamanaka on Mar. 2 of last year, was the aggressor throughout.

Ituarte, however, was the more effective fighter, especially in the second half. The Santa Ana native consistently landed the more telling blows, especially during the final two rounds when Carlson tired.

With less than a minute left in the second, Dutchover, who is co-promoted by Banner Promotions and Thompson Boxing, dropped Fowler with a right hand to the body. In the third, a left hook to the body dropped Fowler again but this time he appeared reticent to continue, prompting referee Eddie Hernandez to call a halt at 1:19.

Bantamweight Mario Hernandez remained unbeaten, knocking out Nery Garcia (1-5) at 2:26 of the third round.