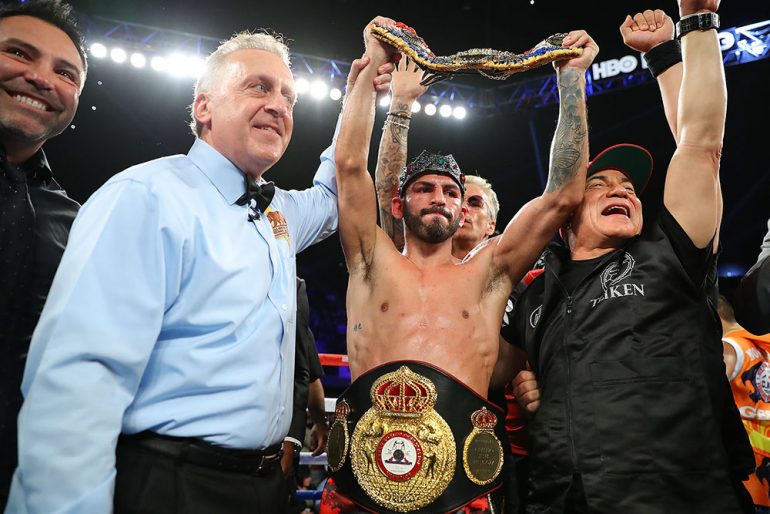 NEW YORK — The talent has always been there in abundance.

It was readily apparent in the way he effortlessly glided around the ring. The way he strung his combinations together with lightning quickness.

Everything just looked like it came so … easy. Jorge Linares’ skills were even being compared by some experts to Sugar Ray Robinson, widely recognized as the greatest fighter of all time. Hyperbolic praise? To say the least. But to even be mentioned in the same breath with such a legend showed the kind of high esteem Linares’ potential was held in.

Fast forward 10 years since Linares made his HBO debut and started whetting the public’s appetite, and that vast potential was never realized. That’s not to say Linares hasn’t accomplished much — far from it. He’s a three-division titleholder, and despite three defeats inside the distance to lesser fighters, he remains on the cusp of the pound-for-pound list.

His date with destiny lies ahead Saturday at Madison Square Garden where he’ll meet Vasiliy Lomachenko, widely regarded as the best fighter in boxing regardless of weight.

Despite carrying status as THE RING lightweight champion, Linares is a decided underdog in the ESPN main event. If he can spring the upset, he’ll not only cement his legacy, but he’ll finally, once and for all, shed the demons that have clouded his fistic career as a fighter who’s unable to reach his full potential.

“I went through some tough times, you guys know,” Linares (44-3, 27 knockouts) said with Golden Boy Promotions matchmaker and father figure Robert Diaz providing translation. “Back-to-back losses, a lot of people wrote me off and everything. Hard work and my dedication got me back there (to the top level).

“We’re going through my best moment in my life right now. Thirteen-win streak and it’s all because of hard work. I went through some tough times. I suffered. But I was able to get myself up and that’s what gets me ready in the morning.

To defeat Lomachenko, let along hang with him, Linares must finally channel his incredible talent — all of it — and put on the best performance of his career. The kind of fight fans and media have been waiting for since he showed of his array of tools on HBO against Oscar Larios in July 2007.

That was Linares’ first foray on HBO, and after he won the WBC featherweight title, it seemed a mere formality that his star would continue to grow.

His career didn’t quite turn out as it was drawn up. In a second title defense of his junior lightweight belt, his chin betrayed him. Juan Carlos Salgado scored two knockdowns and finished him off in the opening round of a shocking upset. Five fights later, he bid to become a three-division titleholder, but this time it was scar tissue that did him in against Antonio DeMarco as blood poured out from what seemed like a hundred cuts around his eyes.

After Sergio Thompson knocked him out in Round 2 in his very next fight, he was all but disregarded as a bust. These were dark times for the Venezuela native. How did it come to this?

He traveled all over the world to find himself. Linares split his time between Tokyo and London, but competed everywhere. England. Venezuela. Japan. Mexico. The U.S. He retooled and slowly but surely, the victories came.

And he’s certain when he looks in the mirror that this is his moment. This is the point where maturity and experience meet his athletic prime. At 32 years old, he knows exactly who he is, and he’s brimming with confidence that’s he up to the task in the defining moment of his career. So, too, is Diaz.

“The losses are really not career-ending, this is a prime example,” Diaz said. “He came back from back-to-back losses, and he’s a world champion, the best in his division. He matured. Sometimes a young fighter with the talent Jorge has thinks ‘I just need to show up and I win.’

“When you realize that’s not the case every time out, you go back and you realize what got you there. Hard work. Discipline. Training. Dedication. And that’s where you mature. Now you see the difference. He gets up in the morning, he runs the mountains, nobody has to go tell him ‘hey, you gotta go run.’ Now it comes from him, and that comes from maturity.”

It’s great that Diaz believes in his fighter, but true confidence comes from within. If anything, Linares is in tune with his mind.

He believes he’ll able to use his feet, movement and speed to close in, cut off the angles and solve the Lomachenko puzzle.

Linares hasn’t looked great in his last two outings, wins over far lesser fighters than Lomachenko in Mercito Gesta and Olympic gold medalist Luke Campbell, but it sometimes takes brushing up against greatness for it to reveal itself in an athlete.

This is Linares’ moment, and this time, there can be no “I’ll get ’em next time out.” Linares says he’s ready to right all the wrongs of an accomplished career but one short of the incredible expectations set out for him.

“I feel right now that I’m in the best moment of my career, I know who I have to fight and I’m very clear that I can win.”

If all goes according to Linares’ script this time around, he’s going to love what he sees staring back at himself in the mirror, bruises, cuts and wounds be damned.