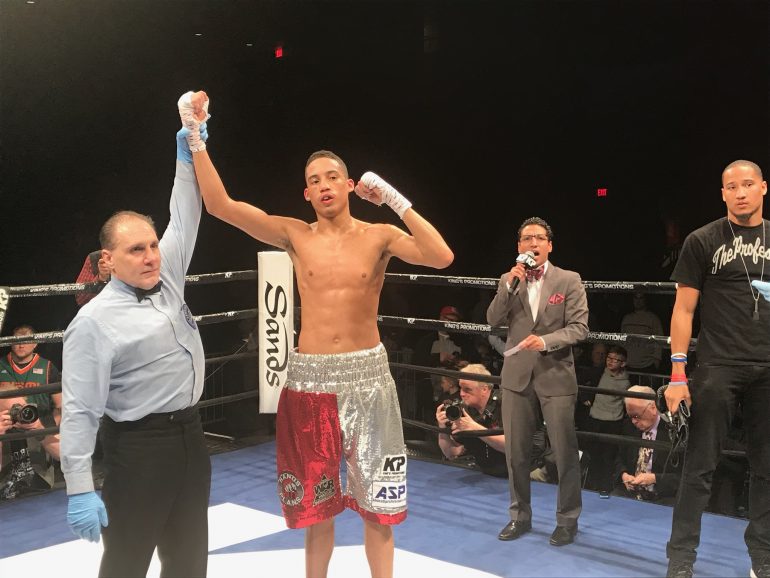 10
May
by Joseph Santoliquito

Mykal Fox is imposing in a variety of ways. First, the 22-year-old Forestville, Maryland native is highly intelligent, well spoken, stands a towering 6-foot-4 as a junior welterweight, and is unabashedly honest. While many young fighters like to trumpet their amateur successes, Fox doesn’t run from his past.

Fox was always that kid with promise, attached with the tag, “It’s a matter of how hard he wants to work.” When it was time to leave the gym, boxing—and Fox’s passion for boxing—stayed with the spit buckets, heavy bags and the dark, musty lockers. Fox didn’t bring the sport home with him, he didn’t let it infiltrate his fiber, as many young, hungry fighters do. Boxing to Fox, in his mid-teens, was a hobby, not a way of life.

That manifested itself in Fox’s 40-60 amateur record—and 58 of those defeats may have been because of himself. Not because of any lack of ability. He just never put in the added work.

“I lost 60 amateur fights, and that’s a lot of fights, because I never went beyond what I was supposed to do,” Fox admitted. “Michael Jordan would stay after practice and shoot 100 free throws. When I was done doing what I was told, I was done. I left the gym. That was it. I’ve learned otherwise.”

Fox (16-0, 4 knockouts) will bring his unusual physical dimensions and his undefeated record into an eight-round, 142-pound catchweight main event against Anthony Mercado (11-3, 10 KOs) at the SugarHouse Casino in Philadelphia on Friday night (7 p.m. ET start).

What changed everything was Fox’s pro debut. Fox was fighting a 30-year-old man who was also making his pro debut. David Ruiz lost all four of the bouts he contested, but he did awaken the fighter lying dormant inside of Fox, who twice beat undefeated Golden Boy prospect Lamont Roach (16-0-1, 6 KOs) as an amateur.

“I was 18 when I turned pro and the guy was 30 that I fought,” Fox said. “I must have seen that fight at least 50 times. That’s when I started taking boxing seriously. I wasn’t that good an amateur because I didn’t commit to boxing like I was supposed to, but once I turned pro and saw what I could do, that changed everything.

“I decided to do it right. I began training outside the gym. I started studying fights that came on TV. I found a strength and conditioning coach. Watching my brother [middleweight Alantez Fox, 23-1-1, 11 KOs] go pro was another motivation to get up and start working. That was a big influence to straighten up and see what happens. Boxing was a way of life. I didn’t live the lifestyle. Beating [Ruiz] in my pro debut did it.”

That’s when Fox kicked himself.

“All of that time I put in, the foundation that I could have built, I’m building now,” Mykal said. “It clicked after my pro debut. I handled [Ruiz]. He was a grown man and I was barely an adult. I saw what I did and I realized this is what I could have been as an amateur. I had to make sure I didn’t go back to what I was as a pro.

“When I beat Roach, he took the sport beyond the gym and made himself better working out. I did what I was told — and that’s it. You can’t stop in a sport like boxing. I didn’t go beyond. I lived a disciplined lifestyle. My passion for the sport right now is high. I try to find BS excuses to stay in on Saturday nights and watch Deontay Wilder beat Luis Ortiz.”

Fox has an experience deficit before him in the Mercado challenge. He’s lost three of his last four fights, but he did win at the SugarHouse the last time he was there. Fox owns a 76 ½-inch reach to Mercado’s 70-inch reach.

“He likes to throw his right hand a lot, and he’s 5-11, so he won’t be used to someone taller than him in the ring, because he’s tall for the weight,” Fox said about Mercado. “He’ll need to look up to me. We’re fighting at a 142-pound catchweight, and my weight right now is good. I have the reach advantage on him and the height.

“It’s taken some time, but I’ve found myself. You’ll see a tall, rangy guy Friday night throwing bricks from top of the roof, while they’re throwing bricks up at me. It’s always nice to throw the bricks down.”