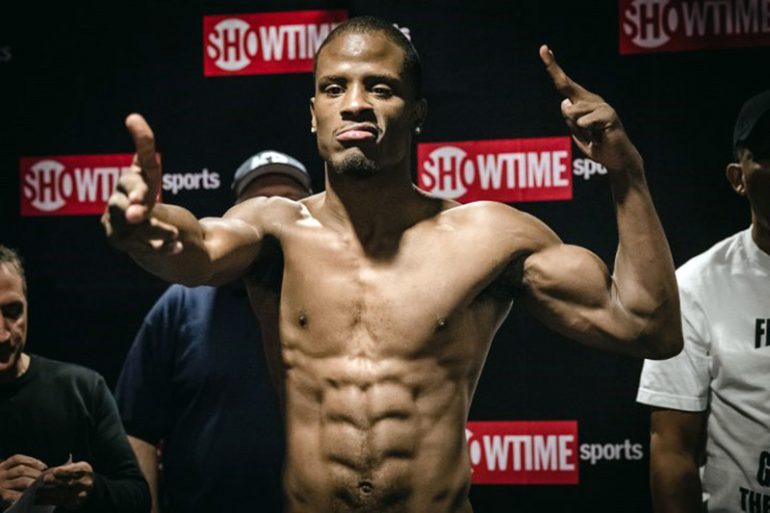 10
May
by Andreas Hale

Tony Harrison isn’t too fond of the number nine. Although he was born in September of 1990, the number nine hasn’t been kind to him in his boxing career. Both of his losses came by 9th-round knockout, to Willie Nelson and Jarrett Hurd. It’s a number he wants to put behind him and replace it with the number one, because if he gets past Ishe Smith (29-9, 12 knockouts) in the main event of their showdown at Sam’s Town Hotel & Casino on May 11, it will be the first former titleholder that the Detroit slugger has defeated in his professional career.

“I kind of consider every fight a crossroads fight,” Harrison (26-2, 21 KOs) admits to RingTV. “But I need it more than he needs it. To beat a former world champion means a lot to me. He would be my first. That’s where the legacy starts for me. I need this win for my family and my last name.”

(Editor’s note: Bronco McKart, who was stopped in the first round by Harrison in May 2014, briefly held the WBO junior middleweight belt in 1996, but it was considered a fringe title at the time.)

There was a time when the junior middleweight division wasn’t so crowded with talent but there was a lot of new blood coming up that made the future look promising. Tony Harrison was one of those guys. He demonstrated some tremendous power early in his career, but a flaw seemingly caught up with him when he stepped into the ring with Nelson. Harrison was up by a wide margin before being caught with a right hand with less than 20 second left in the 9th round that shockingly ended his night along with his unbeaten streak. A similar situation happened against Hurd, where Harrison started off strong but yet another right hand caught him flush and ended the fight.

He would be lying if he said those two losses and the manner in which they happened haven’t haunted him.

“It’s so disheartening for me, especially in the fashion that it happens,” the 27-year-old says. “Knowing that I’m up almost every single round, it’s hard to watch. Everybody that has watched the fight will let you know exactly what happened. I don’t need to rewatch those fights, because I’m reliving those moments every single day in my mind.”

In order to move forward, Harrison says he had to get past the idea of losing. Fortunately, he won’t be facing a huge puncher in Smith, who hasn’t scored a knockout victory since 2014. But he’s aware that he’s facing an incensed fighter who isn’t looking to hand over the keys to the future of the division just yet.

The 39-year-old Smith is coming off of a loss to Julian Williams that was a lot closer than the scorecards suggested. And Harrison hasn’t seen much rust on Sugar Shay’s game.

“I thought he had a good performance. Not a winning performance, but the kind that says that he still has something left in the tank. Win, lose or draw, he still has a whole lot to give,” Harrison said.

Although the goal is to get his hand raised, Harrison would love to do something that would get him recognized in a talented division filled with youth. And in order to do that, he’d have to accomplish something no other fighter has done to Smith: knock him out.

“The goal is to win, but for me to put a stamp on it I would have to knock him out,” Harrison says. “Nobody else has done that before. He has a number of losses against credible guys, but nobody has been able to take him out. Everybody knows how durable he is. You can throw a brick at him and he’ll take it.”

Harrison has confidence in his power, but he’s no fool, either. Planning to knock everybody out eventually cost him his conditioning, which led to him fading late against the likes of Hurd and Nelson. It’s a mistake he isn’t interested in making again. Should he get past Smith, Harrison believes he should be in the conversation for a title fight against Hurd or any other top name at 154.

“(After I win) there aren’t too many people that you can put in front of me that aren’t championship caliber,” he says. “The best need to fight the best. But anybody who wants to compete, I’m willing to fight against.”