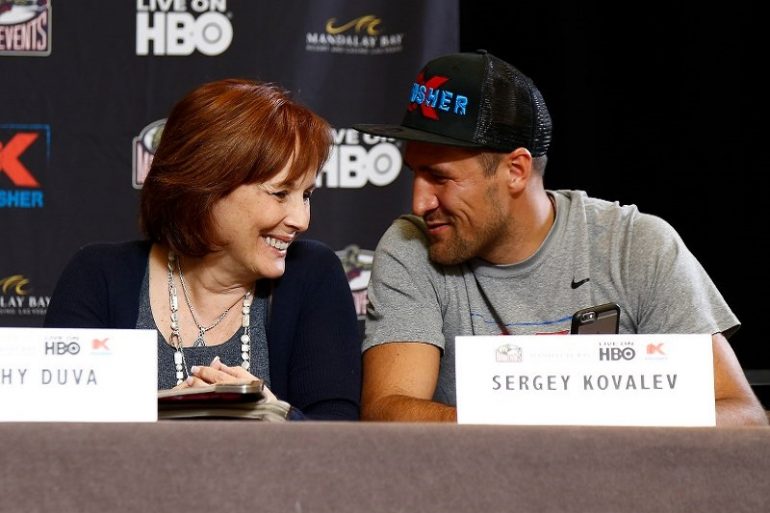 Atlantic City has been fighting off the ropes and, let’s say it, taking losses for a good spell.

Boom-time, and then busts, with casinos and properties that had high price tags to build and maintain, have rendered AC a rework in progress. That hadn’t been a beneficial big picture, for locals, for the prospect of having that destination keep on rumbling as a haven for fun-seekers.

It wasn’t helpful to boxing promoters like New Jersey-based Kathy Duva and her office of “Jersey girls,” either, as they looked to find homes to place fights for Main Events’ gleaming centerpiece WBO light heavyweight titlist Sergey Kovalev. Yep, casinos that were closed, or in receivership, were not good bets to play host to the next big boxing card.

Duva tried, and re-tried. She made the calls, made the visits, had the meetings. Nah, she was told, we really can’t commit to a big event. Or, if tepid interest was offered, execs told her they couldn’t even furnish hotel rooms to the promotion. This explains why Kovalev’s fight against Bernard Hopkins, in November of 2014, was the last time AC was platform to a big-time boxing event. Since then, the Russian fought in Montreal, Vegas, Montreal again, Russia, Vegas, Vegas again, New York City and once again in NYC for his most recent outing, a stoppage win over Igor Mikhalkin in March.

But get the confetti ready for the return to AC for Kovalev (32-2-1, 28 knockouts), Main Events and marquee boxing events. Some small promotions have been running in AC but, on August 4, HBO will be shooting; Kovalev will be gloved and trading with Eleider Alvarez, at the Hard Rock, in Atlantic City.

“AC has been going through some changes, thanks to people like our fearless leader (President Donald Trump) and others. It was run into the ground,” Duva told me. Not only that but a proliferation of casinos, on tribal lands and elsewhere, have made the gaming space more crowded. Duva is ecstatic that AC is back as a platform/venue player.

The last few years have been a period of, to put it euphemistically, “creative destruction.” The closings have meant that some old brands blew away and some stuck around but got a makeover, a more current look.

That a solid brand like Hard Rock is here, spending money to make money, is good news for Duva.

She’s not counting chickens but if sports gambling gets OK’ed in Jersey, that’ll be another positive catalyst.

“Madison Square Garden is great; our intention is to go back with Sergey,” she said. “But this one is right for AC. The last week of July and the first week of August is basically holiday to contractors, in Canada, in Quebec, so we expect them to travel to the Jersey Shore and a packed house.”

“The house,” in this case, is what used to be the Taj Mahal arena, which opened in 1990. It is now the Etess Arena at Hard Rock Live, and then was known as The Arena at Trump Taj Mahal before Trump went bankrupt there. The space reopens in late June and will be significantly spruced up. It was built with boxing in mind, Duva pointed out, so it will emerge as a good choice to place fight sport events.

Bernie Dillon was at the Taj, and is an executive at Hard Rock, so he and Duva are working in concert to make the August event pop. WBA light heavyweight titlist Dmitry Bivol (13-0, 11 KOs) will be on the undercard, Duva relayed. Duva and Dillon are working on the date now, while occasionally recalling events at the Taj from before the bust, like the Bert Cooper-Michael Moorer scrap.

It’s more fun to reminisce about those old days when the present-day has bright spots and reasons for optimism sprinkled into the mix. Old-timers will recall Arturo Gatti, then 5-0, was on that 1992 card. Trump had actually gone into bankruptcy on the Taj, by that time, for the record.

I told Duva that I’d been keen to see Marcus Browne test Kovalev but she told me his legal status made her go with Plan B, Alvarez.

My three cents: AC re-blooming, to a point, as a fight promotion destination is another development in the upward trend of activity in the region. Good news for the wellness of the sport, I’d say.