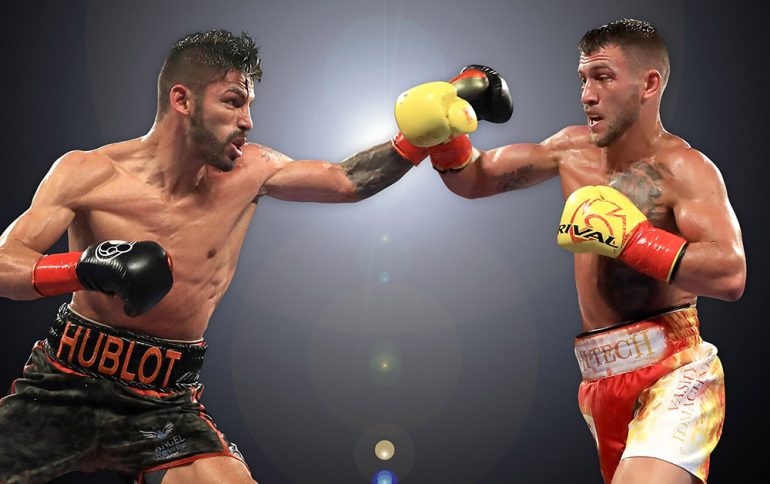 09
May
by Anson Wainwright

This Saturday, RING and WBA lightweight champion Jorge Linares will put his belts on the line against arguably the most talented fighter in the world, Vasyl Lomachenko, at Madison Square Garden in New York.

For a long time Linares (43-3, 27 knockouts) has been considered one of the finest 135-pound fighters in the game, but true recognition has always eluded him. The crafty Venezuelan has relentlessly sought out an elite rival and now – finally – he has one. A three-weight world titleholder, the 32-year-old Linares is unbeaten in 13 fights contested over the past six years.

Lomachenko, 30, finished his amateur career as a double Olympic champion with an astonishing 396-1 record. The Ukrainian dynamo won the WBO 126-pound title in just his third fight and the WBO 130-pound title in his seventh. Put simply, Lomachenko (10-1, 8 KOs) has looked unstoppable as a pro.

MICHAEL WOODS: LOMACHENKO UD
Easy work for Loma. OK, maybe not ultra-easy. But that guy is in another zone. And it will take someone and something out of his comfort and zone to beat him. Linares isn’t that. He’s A grade in spots, at time…but not enough the time to bother Loma. Loma gets UD.

LEE GROVES: LOMACHENKO KO 10
Linares has bounced back nicely since his back-to-back losses several years ago, but he hasn’t faced anyone of Lomachenko’s ability in terms of technical skills. There may be a possibility of a fifth straight “Nomaschenko” ending because Linares’ composure was shaken during the final rounds of the DeMarco defeat, but, given the stakes, I don’t think Linares will give in here. Instead, I believe Lomachenko will administer a “Hi-Tech” dissection that will open up Linares’ scar tissue, which may score a TKO the “old-fashioned” way.

MARTIN MULCAHY: LOMACHENKO TKO 8
This fight is about vitality for me; Vasyl Lomachenko has it in spades while Jorge Linares is a proud champion pushing his physical odometer to the limits at age 32. Linares excels at nearly everything, but has had a snake bitten career, having unexpectedly been stopped three times by inferior opponents. Lomachenko is not inferior! A ‘by the numbers’ boxer like Linares does not cope well with Lomachenko’s quirky angles, and the intuitive movement that “The Matrix” delivers consistently will throw Linares off his rhythm. Lacking the power to bother Lomachenko, nor the speed to put him off, Linares is cut open or put into survival mode by the fourth round. I see Linares either rescued by his corner or stopped outright by the eighth round.

TOM GRAY: LOMACHENKO UD
There’s so much excitement about this matchup and that’s not surprising. Lomachenko is the most naturally gifted fighter in the world today and the larger Linares is one of the best pure technicians in the sport. However, I can see both men cancelling each other out. The offensive threat Lomachenko presents will force Linares to adopt frustration tactics. I see the older man using the perimeter of the ring and working at long range. Any time Lomachenko attempts to hustle for angles and work his way around the target, I think Linares will defuse the situation by stepping away or clinching. I can’t see him winning, but I think Linares has the skills and savvy to last 12 rounds. He loses 8-4 and some – not many – will argue that he should have been given the verdict. Vasyl Lomachenko UD 12 Jorge Linares.

NORM FRAUENHEIM: LOMACHENKO TKO 9
If you’re looking for a classic, Jorge Linares qualifies. From balance to hand speed, he has lots of that golden oldie, old-school kind of stuff. The well-practiced fundamentals are there. But the cutting edge is missing and that’s what defines Lomachenko. It’s who Lomachenko is. He is introducing angles and moves that are pushing the fundamental into the future at a dynamic rate. Linares hasn’t seen them, won’t be ready for them in a bout that will end in a late round when Lomachenko’s unprecedented blend of skill and style strikes Linares’ fragile chin with a combo he never sees.

TOM GERBASI: LOMACHENKO UD
Thirteen years and five days after Corrales-Castillo I, we should be in for something special again on May 12 when Jorge Linares faces Vasyl Lomachenko in NYC. No, I don’t expect to see the level of violence inflicted by Corrales and Castillo on each other, but in terms of talking to a non-fan and saying, “This is what boxing is about,” this is that fight. Can’t pick against Loma at this point, but Linares will have his moments before losing a clear-cut decision. Lomachenko WUD12

GARETH A. DAVIES: LOMACHENKO TKO 11
History-making from the Ukrainian. Perfect timing for Vasyl Lomachenko to face Jorge Linares. Have always thought that Mikey Garcia would be a step too far at 135, for the very small lightweight which VL will be, but not against Linares. Have a sense it will be a No-Mas-Chenko again, after a terrific first four rounds. For all Linares’ skills and speed – and there is sooooo much there for the purist too admire, there is a vulnerability to his physicality at the core, shown by Kevin Mitchell in London a couple of years back, and Lomachenko will exploit it. Linares, we should remind ourselves, is a climber himself from 126 pounds. Lomachenko must of course carry his power up to 135. But his timing and precision, balance, movement and angles are so exquisite, I think it will. Close after four rounds, tough for the Venezuelan after eight, Linares will start to be broken in the last third and stopped in 10/11. Eleventh round TKO victory for Vasyl Lomachenko.

ANSON WAINWRIGHT: LOMACHENKO TKO 6
Excellent fight on paper. The best talent in the sport against the technically proficient more experienced champion. I see it playing out rather one-sided. This fight is about timing and Lomachenko is at his absolute peak, whereas Linares has lost a bit off his fast ball. Boxing is about styles but it’s difficult for me to see Linares struggle with Luke Campbell and look mediocre against Mercito Gesta and find a reason he can beat Lomachenko. I expect Lomachenko to break down Linares in between rounds 6-8. I think Linares pride will prevent him from quitting and he’ll go out on his shield with either cuts or a volley of punches causing the stoppage.

STEVE FARHOOD (TV ANALYST): LOMACHENKO UD
I have to go with Lomachenko and that despite Linares being one of my favorite active fighters. Lomachenko has too much quickness, too much energy, and too much imagination. Linares is an amazing offensive fighter, but if his size advantage doesn’t prove to be the difference, I see Loma winning comfortably on points or on cuts.

TONY TOLJ (MANAGER): LOMACHENKO TKO
Lomachenko vs. Linares will be epic, I’m a big fan with both. My good friend Cecilio Flores (strength and conditioner) will no doubt have Loma in excellent condition. I see the fight very competitive for the first 6 rounds, and there will be back and forth, then Loma will start pulling away. Then I see Linares being unable to solve the Matrix for the next couple rounds. Loma from then will systematically breakdown El Ninò Del Oro and the fight will be stopped between rounds 8 to 10. Winner and NEW WBA world lightweight champion of the world Vasyl “No Mas” Chenko.

DUKE MCKENZIE (FORMER THREE-WEIGHT WORLD TITLEHOLDER/TV ANALYST): LINARES UD
For some time now, boxing has been praying for a fight of this quality. No need for boring trash talk or rubbish press conferences where someone says or acts like a fool. No, this really is the Best vs. the Best. Surely your Friday night fans will say Lomachenko is the second coming since Jesus Christ, for all his brilliance, but I see a difference in class in Linares. Sounds crazy, but Linares is special; as a 3-weight world champion he commands respect and is in the form of his life. I think if the judges don’t get it horribly wrong and score for a controversial decision to Lomachenko, then Linares wins via a points decision or, dare I say, a late stoppage.

TONY “THE TIGER” LOPEZ (FORMER TWO-WEIGHT WORLD TITLEHOLDER): LOMACHENKO KO
Lomachenko by KO in the middle rounds. It’s all about what Lomachenko wants to do. Power, side to side movement, defense the biggest part is his head on fighting style. Linares is tough but Lomachenko has too much for him.

JOLENE MIZZONE (MATCHMAKER): LOMACHENKO RTD 7
Lomachenko by the seventh round (RTD) I think that Linares isn’t going to want to go past the 7th round with Loma. Loma is like the matrix and makes his opponents not want to fight anymore.

KATHY DUVA (PROMOTER): LOMACHENKO RTD 5
I can’t think of a fighter that I would pick to beat Lomachenko. He is scary smart, unbelievably athletic and coordinated and, now that he has close to a dozen pro bouts under his belt, a puzzle that I just don’t think anyone can solve. I’ll pick the fifth round.

CAMERON DUNKIN (MANAGER): LOMACHENKO TKO
I think it’s a one-sided fight, I think Lomachenko wins every round and stops him somewhere in the mid-rounds, six through eight or nine.

PAULIE MALIGNAGGI (FORMER TWO-WEIGHT WORLD TITLEHOLDER/TV ANALYST): LOMACHENKO TKO
I think Lomachenko is probably a bit fresher, but Linares is always a great boxer. It’s just I don’t know what he has left. For a great boxer Linares does get hit a lot and I think that only gets worse as you get older. I think Lomachenko by late stoppage.

SERGIO MORA (FORMER WORLD TITLEHOLDER/TV ANALYST): LOMACHENKO UD
I think Lomachenko is at the top of his game and his confidence is through the roof. Linares might have size on him, but it won’t be enough. I like Loma by unanimous decision.

STEPHEN EDWARDS (TRAINER): LOMACHENKO
This fight will prove the difference between a special fighter and a great talent. Linares is an uber talent and has a distinct size advantage in this fight. But Lomachenko is stronger than he looks and his mind processes on a different level. At the midway point Lomachenko will take over and start to wear him down. Late stoppage or unanimous decision.

ERIC BOTTJER (MATCHMAKER): LOMACHENKO KO 9
Lomachenko-Linares. Linares is a fine fighter, but I give him little chance. Lomachenko is a man from the future, someone who is doing things one would expect from a 22nd century boxer. He’s in his prime, he’s taking Linares seriously, he sees bigger fights in the future. He won’s slip up. Lomachenko in 9.

KENNY ADAMS (TRAINER): LOMACHENKO UD
I trained Linares before, he is an outstanding fighter, he’s very skilled, can box and punch, can do everything. I think the youth right now has got to be on the side of Lomachenko. He’s a very special fighter too, he does all great moves, some moves like Sugar Ray Robinson, who was the greatest period. I think it’ll be a good fight. The problem is Linares has a tendency to get cut early; hopefully he gets past the first rounds [without getting cut]. I’d say Lomachenko more than likely by decision.