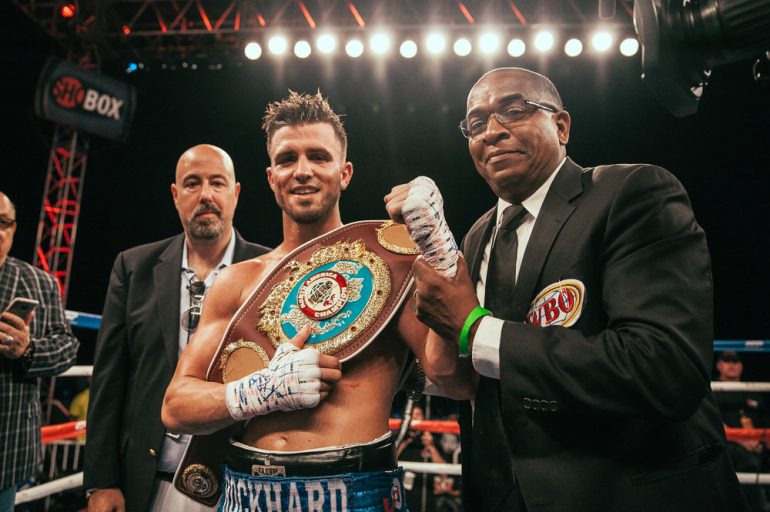 Photo courtesy of Showtime
09
May
by Joseph Santoliquito

Mason Menard has been around. He knows the score. “Rock Hard Mighty” is playing the B-side of Showtime’s ShoBox main event Friday night (10 p.m. ET/PT), in a scheduled 10-round lightweight bout against rising star Devin Haney from the 2300 Arena in Philadelphia, Pennsylvania.

Menard (33-2, 24 knockouts) enters the fight coming off the longest layoff of his career, rupturing the front rotator cuff tendon in his left shoulder, which also resulted in a left biceps tear, which detached during the first round of his eight-round victory over Carlos Cardenas in March 2017.

He basically won that fight with one arm.

“Yes, I did,” confirmed Menard, who underwent surgery to repair it on May 1, 2017. “I’ve had shoulder problems throughout the year, but for that fight, I dropped Cardenas, and I felt something in my shoulder. It took a round or so before it hit me. I tried throwing a jab or two, and couldn’t, and from there, I was done. From rounds three to eight, I couldn’t jab, hook, or anything. I basically fought with one arm.

“I kept my left arm down, and I would feint with my left, just make him think I could I use it, but I couldn’t. It was excruciating pain. There was no option to quit. I knew I would be fighting with one arm from the first round when I dropped him. He was scared in each round after that. I made him fight at my tempo. After the third round, that’s when I told my corner that I was finished and made Cardenas fight at my pace. I had to get through a round or two with one hand.”

Menard’s shoulder was every nightmare imaginable. He couldn’t start rehabbing until six months later, in November 2017, slowly building his strength back up, along with his endurance and his coordination. It was the second significant injury Menard has endured. In January 2015, he had to undergo surgery on his right hand.

And Menard knows he’s not supposed to beat Devin Haney, a 19-year-old prodigy who many in boxing are predicting big things for.

“When they mentioned the fight to me, I was like,’ Yeah, I’ll take him on,’ because I never back down whoever they throw at me,” said Menard. “There is a reason why they throw someone like Haney at me. They believe in me and this will be a good start to get my career going again. This will put me back in top 10 with a win right here.”

Menard knows Haney (18-0, 12 knockouts) is very skillful and fast. Whether he’ll be able to sustain Menard’s punching power could be a question Menard would like Haney to answer.

Another looming question for Menard: Is this too steep a challenge coming off a 14-month layoff?

“That’s only natural, and I took the Haney fight because I don’t know whether or not the kid is ready to rock and roll,” Menard said. “He’s never been put in tough. Not with someone like me. This is a test for the both of us. I’m considered the veteran, but I have been off for so long and inactive. I’m coming back after surgery and the kid has been active and he’s a blue-chip prospect.

“Can I overcome the long layoff to beat a young, good fighter and escalate my career back into the top 10? Or can the kid overcome a savvy veteran like myself and prove he’s legit, despite the bums he’s fought? That’s the way I look at it.”

Menard stayed with Ray Beltran, before being stopped at :51 of the seventh round. Menard took that fight on a week’s notice and says he struggled to make the weight for the 10-round lightweight bout. Menard feels as if he brought out the best of Beltran, like he believes he’ll bring out the best in Haney.

“Menard has some power and the world is saying that he’s my toughest test, and I’ll agree with that,” Haney said. “He’s going to come to fight and he’s no slouch. I want to show the world that I belong with the top guys. I think Mason is a good fighter; I just think I’m on a different level.”

Menard plans to disprove that.

“I’m looking forward to showing everyone that I am back,” Menard said. “I’m the real deal and I can compete with any champion at 135.”