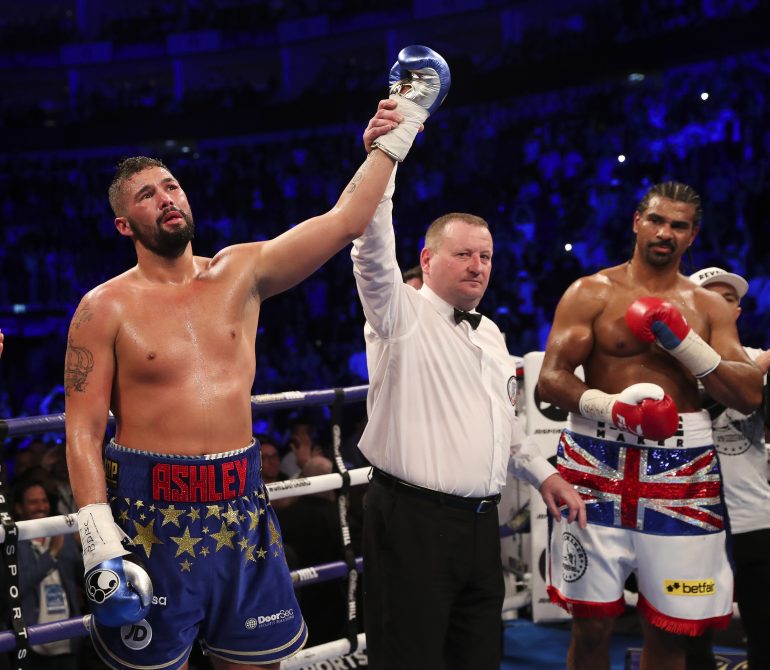 Bellew (left) beats Haye for the second time. Photo by Lawrence Lustig
08
May
by Tom Gray

On Saturday, moments after stopping David Haye in the fifth round of their all-British heavyweight rematch at the O2 Arena in London, Tony Bellew was a matchmaker’s dream. Hypothetical bouts were being thrown at the 35-year-old boxer-puncher from every angle, which is only to be expected following an exciting victory. Even Bellew was screaming “Next!” during his post-fight interview. However, the only disservice with the forward planning was that the professionalism of the job he had just done on Haye was largely ignored.

This finish was one for the highlight reel.

There were three knockdowns in total (two of them in Round 3), but the final one – the decisive shot – was terrific. In Round 5, Bellew moved backward on his toes to create space and was out of range as he released a one-two while his legs, simultaneously, carried him in. Haye attempted to intercept with a brace of hooks, but his opponent had traversed to the left of the center line and was therefore unavailable. And then it happened. Bellew’s most concussive punch – the left hook – landed with the swiftness and accuracy of an arrow hitting bullseye. Haye’s head swiveled violently before he belly-flopped to the canvas.

“I kept making him go to his right,” explained Bellew in an interview with THE RING. “David Haye is very good on the front foot and going to his left and (trainer) Dave (Coldwell) noticed that. But we concluded that David Haye usually likes fighters to go on to his right hand, so I played a very dangerous game of circling towards that shot, but I was out of range. He kept having to adapt and adjust and that made him very uncomfortable. It was just a bit of brains and I masked that left hook with the right hand. You can’t just potshot good fighters with one punch, so I had to set him up.”

Haye was hurt – badly hurt – but the former champion, who has come under scrutiny for a lack of fighting guts in the past, rose bravely to face the inevitable. The hard-hitting Londoner lost some fans due to the Toegate saga which followed his ignominious points defeat to Wladimir Klitschko in 2011, but Haye is a warrior who was prepared to go out on his shield. In this case, however, the mind was willing, but the body told the mind to piss off. Referee Howard Foster stopped the fight at the perfect time when the defenseless former champion absorbed a cluster of free shots.

“I was able to do it because I can still do the things that David can’t,” offered Bellew. “Don’t get me wrong, I believe I would have beaten him 10 years ago simply because I have better feet than he does. Even in the first fight, before the Achilles injury, all the exchanges happened on my terms. But I’m never going to get credit because I don’t look good aesthetically and I don’t throw Miguel Cotto combinations. What I do is make fighters miss, make them pay and I carry some very dangerous tools.

“Over the years, I’ve studied great left hookers: Joe Frazier, “Tito” Trinidad, Fernando Vargas, Evander Holyfield and Cotto. James Toney with a counter left hook was as good as anyone, but people don’t really study and analyze it because it wasn’t a huge knockout punch. Some of what I was doing on Saturday was reminiscent of those fighters, but that’s not to say I’m a patch on them – I’m not fit to carry their jockstraps. It’s just that I’ve practiced this stuff for years and its part of my repertoire.”

Bellew has his detractors – plenty of them – but actions speak louder. Five years ago, if someone told those same rampaging critics that the weight-drained 175-pounder who was swatted aside by Adonis Stevenson in Quebec would claim European and world titles at cruiserweight before stopping David Haye twice at heavyweight, they would have laughed their asses off.