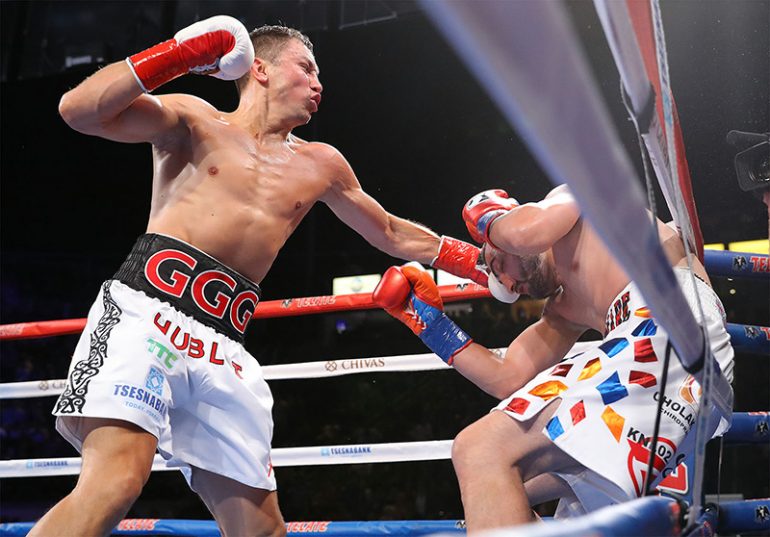 Gennady Golovkin made his fans happy with his two-round demolition of brave Vanes Martirosyan but he still has his share of detractors in the "Twitterverse." Photo / Tom Hogan-HoganPhotos / GGG Promotions
07
May
by Michael Woods

In my neighborhood, I sometimes see the garbage men on their route, going like gangbusters, grabbing sacks of refuse and tossing them into the truck bin, treating the effort like they are trying to beat a clock, for a cash prize.

Sort of, they are. When they finish their delineated route, whether it’s in 6 hours or 4, they are done for the day. Thinking is, hustle hard, finish up and head home, and relax. The pay is the same, so might as well bang it out quick, and chill.

So it is in Brooklyn and so it was Saturday night at StubHub Center in Carson, California, for Gennady Golovkin.

And no, we are not even obliquely implying that foe Vanes Martirosyan was playing the part of refuse, though there are pockets of patrons who would not shoot down that comparison.

Me, I opined–possibly, maybe, informed more than was wise by the “fan” side of me rather than the (supposed to be) clear-eyed analyst sort–that we’d see some more even rounds than many assumed coming in. Many folks saw an early GGG rubout ultra-possible, and I thought that Vanes would smart box his way to the late innings, maybe even see the final bell. Well, I was a tiny bit right, in that round one saw Vanes landing a combo that got GGG’s attention, and had him doing his, “OK, yes, you got me, you effer,” nod. But that only served to kick GGG into gear. He went to his corner, listened to Abel Sanchez, and decided then and there that this shift would be an abbreviated one.

Result: We on the East Coast were not unhappy, those of us that sound like grumpy oldsters and rail against 11 PM start times…

Also, fans of KOs got their pound of flesh, their climax to savor. The end-game combo was a thing of savage beauty, as Golovkin, who hit like a “train,” the loser told us after, put together punches in a savage bunch. 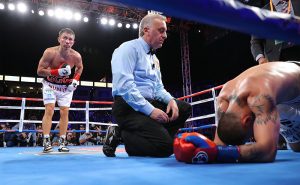 Vanes tried to rise to beat the count, but Jack Reis reached ten, and the shift ended for the sure-to-head-back-to-154 loser, and the victor, who now has to do a rinse and repeat negotiating rigamarole regarding Canelo Alvarez. Oh, but before we head back into that well-trod spot, what say we check in with Gennady’s trainer, Abel Sanchez? What were Abel’s takeaways from the second round win, which had most GGG fanatics mildly giddy, at seeing their hero once again impose his power edge over a hapless opponent?

“When your opponents want to win and come out and try to win, we get entertaining fights, fans and critics will badmouth efforts,” Sanchez told THE RING, “but you have to want to be the best for you and fans, without their support greatness will not be possible. Skills are a small part of the equation.”

Point being, in the last two fights, in Abel’s eyes, Danny Jacobs and Canelo Alvarez fought primarily to not get hit too clean, and that meant defense was often foremost on their mind. Vanes told us he’d look to be an aggressor and not be afraid to trade, and he followed that blueprint. Of course, in this age, where contrarian opinionaters have a vested interest in offering critiques and slaps, because negativity gains more attention than positivity, you had analysts busting on Vanes for acting that way. (Maybe a more-than-small element of this activity in boxing stems from the new reality, that most-all adults better understand what brain trauma can lead to down the line, and thus, many of us feel more conflicted than we used to when seeing a fighter pay less attention to defense than his neurologist ten years from now would have liked.)

“There is a fan for both (styles of fighting, super aggressive and ‘skills pay the bills cuties’), for the fighter it all depends on what type of response from fans you are looking for and what kind of legacy you want to leave,” Sanchez said.

The nitpickers had a hard time letting go of the fact that this coming up from 154 foe was chosen for the 160 ace. Sanchez has a counter for them: “All the greats in any era had the Davey “Boy” Greene (stopped by Ray Leonard in 1980), Andy Price (stopped by Leonard in 1979), Bruce Finch (stopped by SRL in 1982) on their resumes, it’s impossible to fight elite opponents every time out.
GGG fought three in a row (Kell Brook, Jacobs, then Canelo), it would have been four!”

My three cents: I can’t and won’t quibble with Sanchez’ take. Seems spot on to me. My final offering: because this age rewards negative critiques so much, we as a citizenry who fall in with this trend have a harder than ever time simply enjoying the moment. Rather, we ponder how it could have been better…or after cursorily enjoying a spectacle, we move on to “what’s next” without digesting the moment.

OK….now, start your engines. Will Canelo be next for GGG, or will the two sides have a too hard a time finding common ground to do a September sequel?