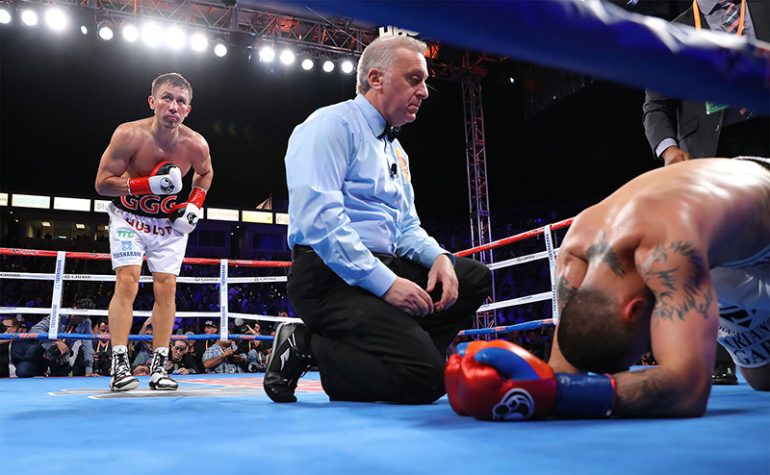 CARSON, Calif. – Vanes Martirosyan entered his unexpected shot at unified middleweight champ Gennady Golovkin with an attitude of defiance and the late-replacement challenger paid the price after having his moments in the opening round of the HBO-televised match on Saturday from StubHub Center.

Martirosyan, a former two-time junior middleweight title challenger who hadn’t fought in two years, jumped at the opportunity to take on Golovkin (38-0-1, 34 knockouts) when GGG’s anticipated rematch with Canelo Alvarez, originally scheduled to take place in Las Vegas on May 5, was scrapped after the Mexican star was suspended by the Nevada Athletic Commission for testing positive for clenbuterol. 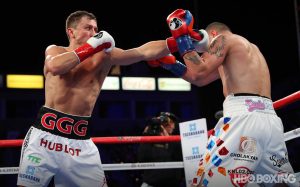 The Armenian-American, who represented the U.S. in the 2004 Olympics (the same Games where Golovkin won a silver medal for Kazakhstan), had never been stopped or dominated in a professional match and he wasn’t intimidated by GGG or the unbeaten middleweight’s reputation. His confidence in his experience and boxing ability showed during the first round. Martirosyan (36-4-1, 21 KOs) kept his composure under Golovkin’s stiff jab and pressure and he was able to get off with clean power punches, including a straight right-left hook combination that caused GGG to stumble back in the final seconds of the opening round.

That brief success appeared to piss off Golovkin, who stormed out of this corner for Round 2 with seek-and-destroy clearly on his mind. Golovkin quickly backed Martirosyan to the ropes where he uncorked a massive uppercut that the challenger amazingly took. However, that ability to absorb punishment was not a good thing because Golovkin kept at it – landed right cross, then the hook, then a hard jab, then monster hook, followed by frightening right, which finally – thankfully – sent Martirosyan toward the canvas (but GGG managed to get a swiping right in before he hit the canvas). 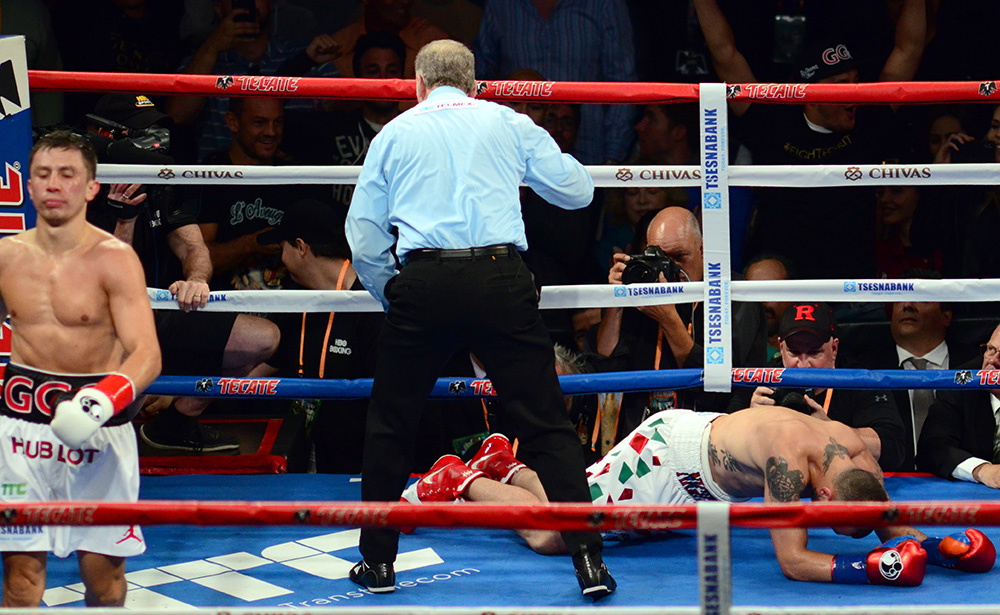 It was brutal, but it’s just business for Golovkin.

“It feels great to get the knockout,” Golovkin said during his post-fight interview. “Vanes is a very good fighter and he caught me a few times in the first round. In the second round I was all business.”

Martirosyan doesn’t impress easy, but he was impressed with Golovkin’s power.

“It was like being hit by a train,” he said. “It wasn’t one punch, but all of his punches. It was the hardest I’ve ever been hit.”

Alvarez’s six-month suspension (which was backdated to the month of his first positive test) will end in August, making it possible for the top two middleweights (and two of the biggest draws in boxing) to tango in September. HBO’s Max Kellerman had to ask Golovkin if he was into the rematch given all the bad blood that flowed during the tense four weeks between the announcement of Canelo’s positive tests and his forced withdrawal from the rematch. 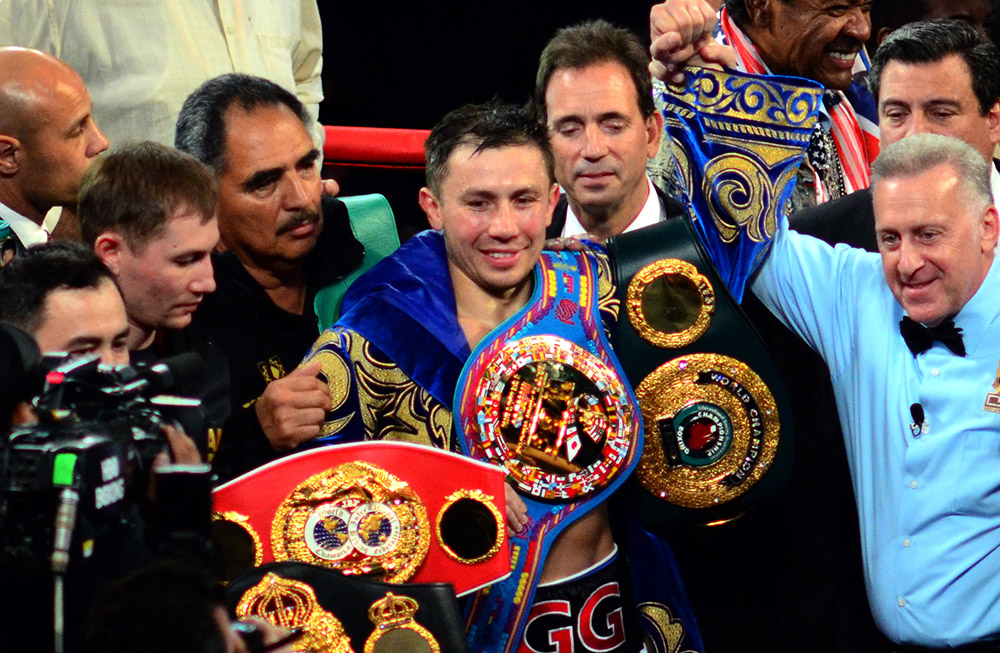 Hey, he might hate Canelo’s guts, but he’s not going to say no to making $20 million in one night. Golovkin may have made $1 million vs. Martirosyan. Maybe a little less. But this fight was not about money, it was about activity and positioning for the rest of the year. Golovkin, who recently turned 36, did not want to get stale waiting for another fight late in the summer, and he certainly didn’t want to wait until September in hopes of getting the Canelo rematch. Being inactive for an entire year was not an option.

By fighting on May 5, Golovkin positioned himself for three fights in 2018. Ideally, bout No. 2 would be the Canelo rematch, and then there is talk of him facing “regular” WBA beltholder Ryota Murata in Tokyo in late December. However, if the lucrative rematch/grudge match isn’t made (which is possible given the levels of animosity between Team GGG and Team Canelo), there are other worthy challengers — all of whom are sanctioning body mandatories — for Golovkin: Jermall Charlo (WBC), Daniel Jacobs (WBA), Sergiy Derveyanchenko (IBF).

Golovkin told Kellerman that he doesn’t care who he fights next.

“I have a lot of belts,” he said. “I’ve been champion for the last nine years. I challenge everyone in the division to come and get my belts. Let’s clean out the division.”