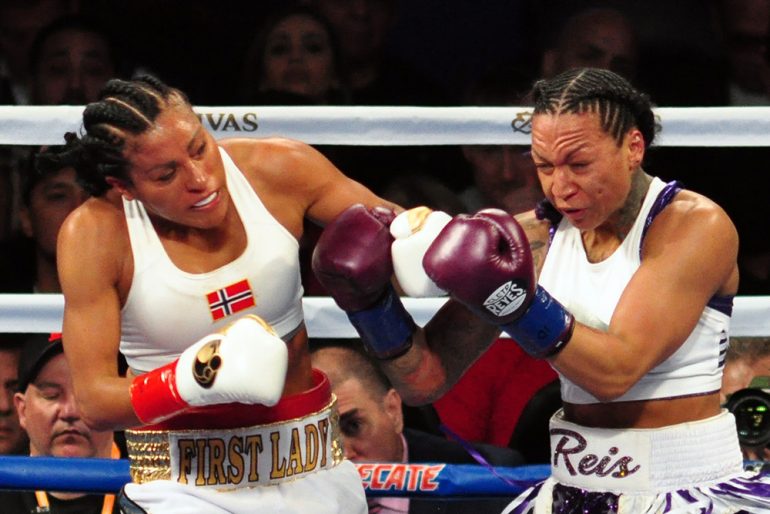 Photo by German Villasenor
05
May
by Doug Fischer

CARSON, Calif. – Cecilia Braekhus earned a 10-round unanimous decision over Kali Reis in the co-feature to the Gennady Golovkin-Vanes Martirosyan main event at StubHub Center on Saturday, but her HBO-televised victory did not come without drama. The undisputed welterweight champ suffered a technical knockdown in Round 7 and was rocked at the end of Round 8.

Braekhus (33-0, 9 knockouts), who won by scores of 97-92 and 96-93 (twice), is the only active boxer (male or female) who holds all four major sanctioning organization titles (WBA, WBC, IBF and WBO) and she is widely regarded as the best female boxer on the planet. However, Reis (13-7-1, 4 KOs), who held a minor world title at middleweight, was not intimidated by “The First Lady” and proved to be the stronger, harder puncher over the second half of the bout. 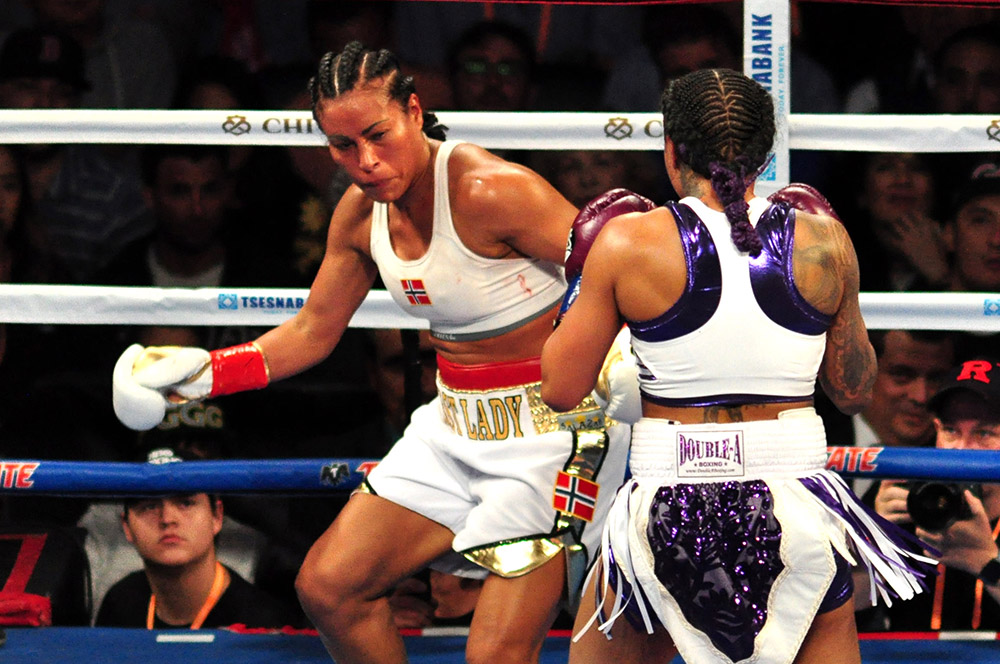 Braekhus stumbles after getting caught by a right hand from Reis. (Photo by German Villasenor)

Braekhus was the better technician and ring general over the first six rounds, working a smart and busy jab, controlling distance with deft in-and-out movement and scoring with fluid combinations to the body and head. However, Reis was able to land well-timed left hooks over the first half of the bout and as the fight progressed, her confidence grew. Once she began coming forward and letting her hands go, the fight became interesting.

She knocked Braekhus into the ropes with a big right hand in Round 7 (prompting referee Gerard White to call it a knockdown because only the ropes prevented her from hitting the canvas) and she appeared to wobble the more experienced pro with a hook-cross combination at the end of the next round. Reis was the aggressor in Rounds 9 and 10 but Braekhus stood her ground and landed her share of power shots.

“This was such a tough fight, I think it was very close. (Reis) has some very good, very hard punches. One or two times I was surprised (by her power),” Braekhus, of Bergen, Norway, said during her post-fight interview on HBO (which broadcast a female bout for the first time). “There will be a rematch, for sure.”

Reis, of Providence, Rhode Island, was not interviewed by the American cable network, but she probably would have said that she should have won the fight, and judging by the boos from the crowd after the decision and during Braekhus’ time with HBO’s Max Kellerman, the fans agree.