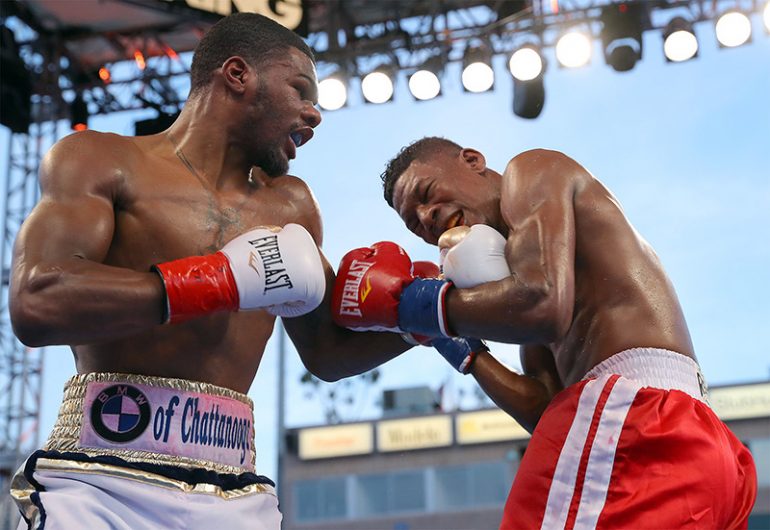 Prescott (31-13, 22 KOs), a veteran gatekeeper from Colombia, was sturdy but never threatened Martin. He could land the occasional straight right to the body but could not compete with Martin’s superior speed and technique. Martin, who used to campaign at lightweight, looked sharp and strong in his second fight above 135 pounds. The Prescott fight was also Martin’s second being trained by Sanchez (although Sanchez’s Summit Gym assistant Ben Lira worked the corner as the Big Bear-based veteran trainer prepared GGG for the main event).

Martin controlled the early rounds with a crisp jab and gradually worked in quick hooks to the head and body. Two borderline lefts to the body (clearly under the beltline but not exactly to Prescott’s cup) put the Colombian on the canvas twice in Round 4, prompting referee Jerry Cantu to penalize Martin a point.

A one-two combination dropped Prescott in front of his corner at the end of Round 5, but the gatekeeper gamely fought back in Round 6. Martin accommodated the veteran by remaining in close.

Also on the undercard, Martin’s Summit Gym/360 Promotions stablemate Ruslan Madiev remained undefeated with a 10-round unanimous decision over previously unbeaten Jesus Perez. Madiev (12-0, 5 KOs), of Karaganda, Kazakhstan, had his hands full with Perez (21-1, 16 KOs) during the early rounds but he gradually imposed his physical strength on the Tijuana fighter and dominated the final two rounds.