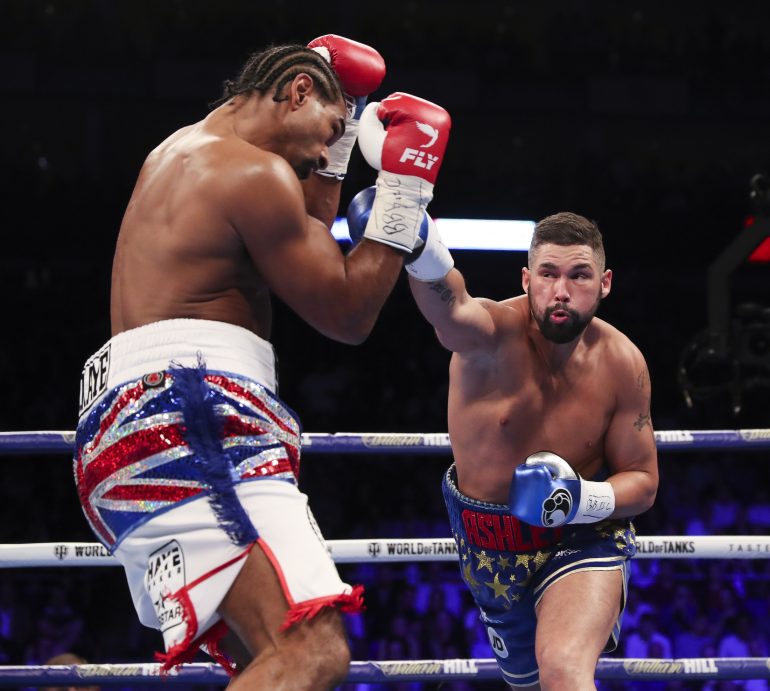 So it wasn’t a fluke after all and that has been rubber-stamped.

In the super-hyped battle of British heavyweights, Tony Bellew repeated his victory over arch-rival David Haye, stopping his countryman in the fifth round of a scheduled 12 at the O2 Arena in London, England, on Saturday. The official time was 2:14.

Bellew, who won the first fight by stoppage in 11 rounds, dropped Haye twice in Round 3, hurting his man badly. The ending, however, was worse. In the fifth, Bellew missed a one-two combination and boxing basics tells you to come back with a left hook – and he did – flooring Haye with a monster shot. Recovery was impossible and a defenseless Haye was rescued by referee Howard Foster as Bellew followed up ferociously.

“David Haye is an amazing fighter and I was hurt in the fight,” said Bellew (30-2-1, 20 KOs) during his post-fight interview with Sky Sports in the U.K. “I did say that with his style he would decline with age. He’s a better fighter than me and a legend of that sport, but this chapter is over.

“Who do you want next? Andre Ward? The best pound for pound out there. Next!”

Haye got off to a good enough start, boxing behind a long jab and banking the first two rounds on aggression. However, the first knockdown came courtesy of a left hook-right hand and the writing was on the wall. The second was equally brutal; a left hook-right hook dumping the stricken former champion in a corner.

Round 4 was one of the worst of Haye’s illustrious career. Bellew teed off with multiple power shots and smashed his rival all over the ring. The only thing Haye (28-3, 26 KOs) had left was bravery and he had that in abundance. It took a terrific shot to close the show in earnest and the left hook in the fifth was a fight-ender. Credit to Haye for getting up, but he was done.

The 35-year-old Bellew has now posted three career-best victories in four fights. In May 2016, he stopped the heavily favored Ilunga Makabu in three to claim the vacant WBC cruiserweight title and his brace of victories over Haye have put him in an extremely strong position.

In a recent interview with RingTV.com, Bellew vowed to close out his career with the biggest fights possible. Potential targets include the winner of the World Boxing Super Series cruiserweight final between Oleksandr Usyk and Murat Gassiev, the aforementioned Andre Ward and deposed heavyweight king Tyson Fury.

Haye, a former cruiserweight and heavyweight titleholder, must now ask himself some serious questions. It was widely accepted that a second defeat to Bellew would signal the end of his illustrious career and, indeed, it’s difficult to see a road back.