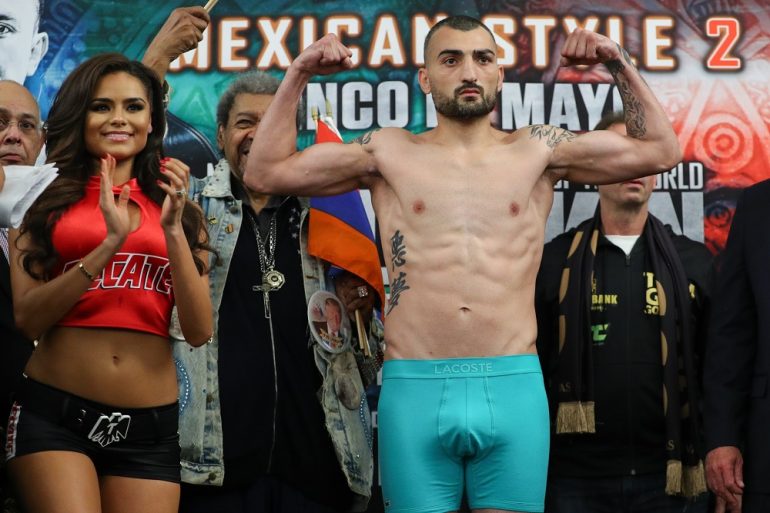 04
May
by Mike Coppinger

When he was selected mere weeks ago to fight Gennady Golovkin on May 5, he knew why. For one, he’s from nearby Glendale, California and figures to bring solid support from his dedicated legion of Armenian fans to StubHub Center in Carson on Saturday.

He’s also coming off a two-year layoff and is a natural 154-pounder now moving up in weigh for a crack at Golovkin, who holds three middleweight titles. Promoter Tom Loeffler possesses plenty of other options for Golovkin, but boxers who offered to step in, like Demetrius Andrade and Sergey Derevyanchenko, pose a threat to GGG.

And right now, Loeffler is looking to minimize in the wake of the cancelled super fight between Canelo Alvarez and Golovkin. Alvarez received a six-month ban after the banned substance clenbuterol was found in his system, meaning he’ll be ready to fight in September, about one year to the date of his first meeting with Golovkin.

In order to preserve that event and the 10s of millions of dollars that come along with it, Golovkin (37-0-1, 33 knockouts) needs to not only win, but emerge unscathed, and if he can do so in impressive fashion with a knockout, all the better.

So that’s what Martirosyan (36-3-1, 21 KOs) is there to do: lay down. Only he won’t. The 32-year-old is as stubborn as they come, and if anything is going to lead him to the seismic upset, it will be that mentality: the belief that Loeffler and Co. made a mistake when they gave his promoter Don King the call.

“So they fought defensive until, you know, if they land a couple they did get excited when they land. But the thing is, I feel like most of the opponents – because the guy’s a monster, the guy hits really hard – so they got into the ring scared.”

This is the sort of opportunity Martirosyan has been begging for, and it’s finally here. Even if everyone is ripping the matchup, he knows he’s not the caliber of fighter some media members are making him out to be. He’s an Olympian after all, one Golovkin called the best on the 2004 United States squad that went to Athens.

And his only three losses came to elite foes via decision: Erislandy Lara, Demetrius Andrade and Jermell Charlo.

If Martirosyan is ever going to get over the hump, it needs to be now. If he’s not going to shock the world as he repeatedly has vowed, he needs to at least compete to attract more meaningful fights afterward.

“We are very blessed to have this opportunity — we can’t wait,” he said. “This is what we dream about, having a fight like this. I am just so excited and every day I have a big smile on my face. I will get to show the world where I belong in this sport.”