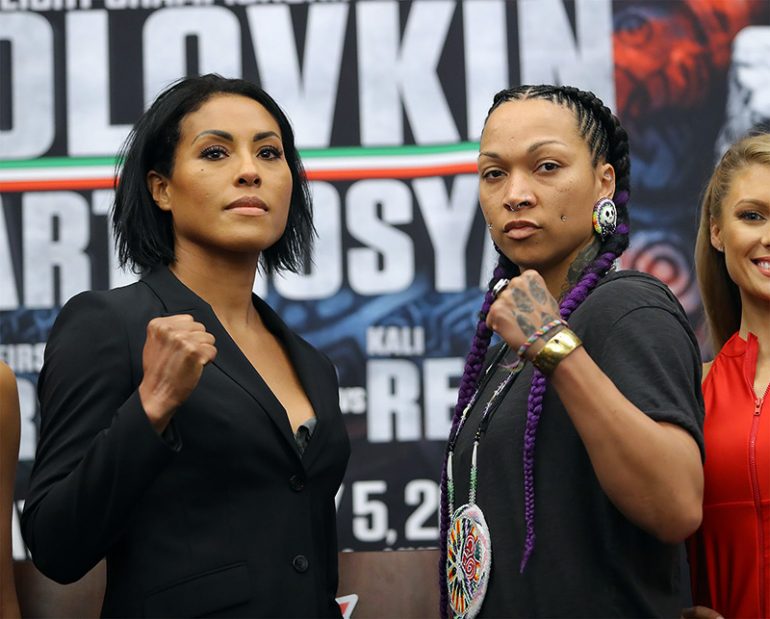 Cecilia Braekhus (left) and Kali Reis pose after Wednesday's final press conference for their welterweight title bout, which will be the first female fight ever broadcast on HBO. Photo / Tom Hogan-Hoganphotos / GGG Promotions
02
May
by Joseph Santoliquito

The American boxing scene has been missing something special for a while, for nearly 10 years, by all accounts.

Female welterweight champ Cecilia Braekhus has fought all over the world. She’s fought in Germany, Denmark, Finland, Belgium, Switzerland and her native Norway, where she herself made boxing legal again. “The First Lady,” boxing’s only undisputed champ, THE RING’s No. 1 pound-for-pound female fighter, and the first-ever Female Fighter of the Year by the Boxing Writers Association of America, hasn’t fought in the United States in a decade.

Braekhus will make her first championship appearance in America when she takes on Kali Reis in the co-featured bout to the Gennady Golovkin-Vanes Martirosyan main event at StubHub Center, in Carson, California. It will be the first time a full female fight will be showcased on HBO.

“There’s a lot going around the [Golovkin-Martirosyan] fight, but my focus is on my opponent, who is a former middleweight champion coming down in weight to face me,” Braekhus said. “If you want to get some fans, you have to show them why you’re a champion. I plan on doing a lot of things to Reis.

“She’s definitely physically strong. It will be a huge competitive fight.”

Making this fight an even larger task for Reis is the fact that Braekhus is being trained (for this fight) by all-time female great Lucia Rijker, who is replacing Braekhus’ regular trainer, Jonathan Banks, who had a prior commitment.

“It’s great to work with Lucia and we have a great chemistry,” Braekhus said. “Lucia is so knowledgeable and someone whom I’ve wanted to work with for a while. I am very excited and this will be a competitive fight. I will box at my absolute best and show everyone why I’m here.”

Rijker has the utmost respect for Braekhus and knows the dangers of Reis.

“It tells you how much of a true warrior Cecilia is,” Rijker said. “Reis is a champion coming down in weight. This fight is about Cecilia showing who she truly is. Cecilia is already a champion. She knows what to do. My job is to bring out her fuller potential. I’m not here to teach Cecilia about boxing. She already knows everything. She’ll apply everything (on fight night).

“Cecilia deserves more respect than she gets. She deserves a statue. You see how MMA treats its female champions. We need to do that more in boxing.”

When she was a teenager, Braekhus would creep out her bedroom window, silently climb out and shimmy down the high fire escape on the side of the house to go training. Each time she wasn’t thinking about making history. She just didn’t want her parents to find out. She wanted to immerse herself into something that caught her attention on a TV commercial. A brief 30-second spot that launched a career and also changed a nation’s attitude toward professional boxing and continues to make history.

Born in Colombia, Braekhus lived in an orphanage until the age of two, but she impacted her adopted home of Norway in such a way that the nation lifted the ban on professional boxing that had existed since 1981.

After Saturday night, Braekhus is sure to gain new fans.