Mike Lee: ‘I believe I am very close to a title shot’ 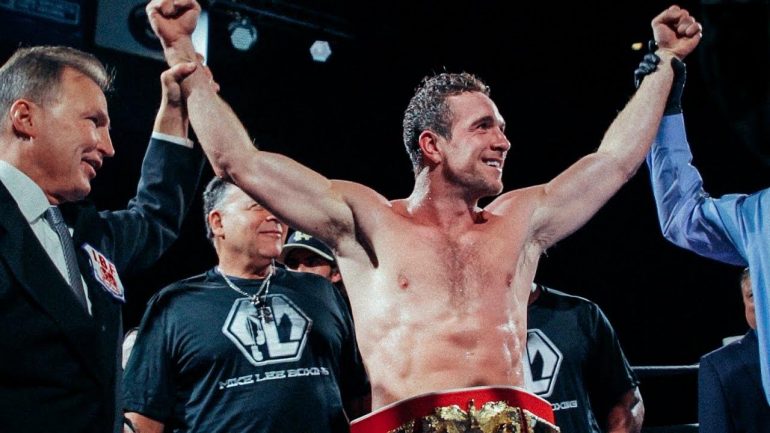 Undefeated light heavyweight contender Mike Lee has been edging up the ratings ladder, slow and steady, and will look to reach 21-0 and edge up another rung, on June 8.

Lee, the Notre Dame grad, will tango with Jose Hernandez (19-3-1, 9 knockouts) at Allstate Arena in Rosemont, Illinois. The scrap, presented by Hitz Promotions and Round 3 Productions, will be broadcast on CBS Sports Network, with Teddy Atlas and Barry Tompkins on the call.

Hernandez has won seven straight but Lee will be a step up in caliber from all those victims.

“I am very excited about this fight,” Lee told RingTV.com. “We have been training even harder knowing that this is on national TV, CBS Sports and in my hometown, at the Allstate Arena. We’re gonna have a big crowd. I never take anyone lightly but I feel very confident going into this fight. I have been getting better, stronger, faster and smarter every fight. That is undeniable. I also perform best at home and in front of a big crowd…so this is nothing new for me.”

Lee popped up on mainstream radar screens when he appeared in Subway commercials a few years ago.

Lee is rated as high as No. 3 by the WBO and No. 12 by the IBF and WBA. “I am hoping this fight will move me to the number one contender, then I want a shot at a world title. I have the ability to fight at 175 or even 168 and I think that opens things up for me. I believe I am very close to a title shot.”

Lee was off radar for a spell, while he was battling a mystery disease, which turned out to be diagnosed about four years ago, as an autoimmune disease known as ankylosing spondylitis. The disease is a form of arthritis that causes inflammation, leading to moments of severe, chronic pain, as well as fatigue. Is that now under control?

“My health has really been great. I have a new strength-and-conditioning coach and nutritionist that has dialed in on specific workouts and, most importantly, diet to fit my training and autoimmune condition. The diet has been the biggest factor for me. I am really excited about putting another big show June 8th!”

That diet, what’s that all about? “No eggs, gluten, dairy, canola oil, MSG (monosodium glutamate), soy,” the 30-year-old Chicagoan told me. “I’m eating only organic lean animal meats, veggies, fruit, sweet potatoes, avocados, coconut oil. Generally speaking: if a caveman didn’t eat it, then I don’t consume it. It helps not only with my performance but my autoimmune disease.”

His dad John told me his kid slayed at a recent event, the 60th Annual Knute Rockne Gala, on April 10, in Chicago.

“It was packed with the President of the Cubs, the Bears, the Bulls, the Hawks, Notre Dame legends and the top mergers-and-acquisition people, presidents of major corporations,” John Lee relayed. “Mike told a compelling story about how he fights with his autoimmune disease; it was a tearjerker. They started out the evening with the music “This is Me” …

…from the movie ‘The Greatest Showman’ with Hugh Grant. It was unbelievable. Now we have this fight on June 8; the entire floor is sold out for weeks in advance. We’re expecting 5-to-7,000 people. He’s going to draw and it’s for the (WBO) NABO title, which will move him from number three to number two or one in the WBO. He’s done all of this without any help from any promoter.”

Proud Papa asked how many other light heavies can draw like that. “We have sales already of north of $150,000 in tickets!”