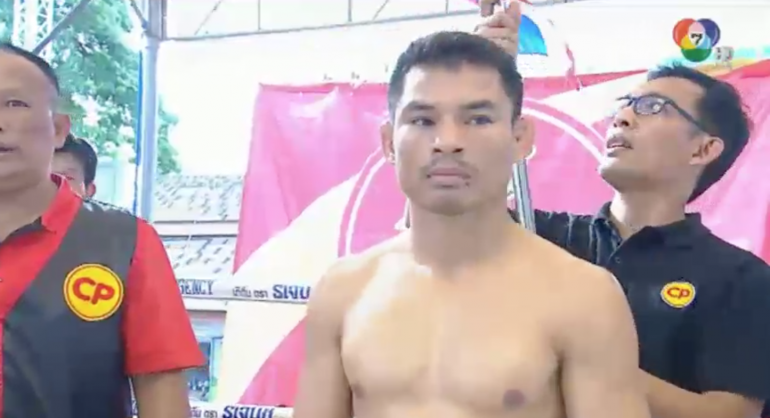 It isn’t often that a 105-pound title defense in Thailand piques international curiosity, but the interesting statistical pursuit attached to Wanheng Menayothin’s fight against Leroy Estrada which made it a bigger deal than the matchup would have otherwise been.

Menayothin entered the fight one win shy of equaling Floyd Mayweather Jr.’s much celebrated 50-0 pro record, though his ledger had been built against far lesser known opponents exclusively in his home country, and with a small fraction of the attention and fight purses “Money” had commanded.

While numerical milestones mean less in boxing than they do in most major sports, it clearly meant a lot to Menayothin (real name Chayaphon Moonsri), who tore through his Panamanian challenger in five rounds to move to 50-0 (18 knockouts), and retained his WBC strawweight belt for the ninth time since winning it in 2014.

Estrada (16-3, 6 KOs), who is nine years younger at 23, certainly gave it a go, darting in and out with his southpaw jab and throwing to the body with both hands in the first two rounds. His ambition left him open to Menayothin’s counter punches, and Estrada could not get away from the straight right hand down the middle.

Estrada hit the canvas twice in round three and another two times in round four, mostly due to that fact.

The finish was the most brutal sequence of the fight, as a staggering Estrada had his head popped up by a right uppercut, then chopped down by a left hook, sending him face-first to the canvas and prompting referee Jay Nady to waive off the bout without a count.

Though the half-century record had been considered a monumental achievement due to the mythology surrounding Rocky Marciano’s 49-0 record as heavyweight champion, there have been many fighters who have at times surpassed it, like Julio Cesar Chavez Sr., who was 87-0 before drawing with Pernell Whitaker in 1993, and Carlos Zarate, the bantamweight great who had reached 52-0 before his first defeat.

The occasion at Nakhon Ratchasima Town Hall in Thailand was significant enough for the attendance of WBC president Jose Sulaiman, who presented Menayothin with a WBC belt bracelet prior to the fight.

Menayothin remains THE RING’s no. 1 ranked 105-pounder, and at least for now, the only active world champion with a 50-0 record.