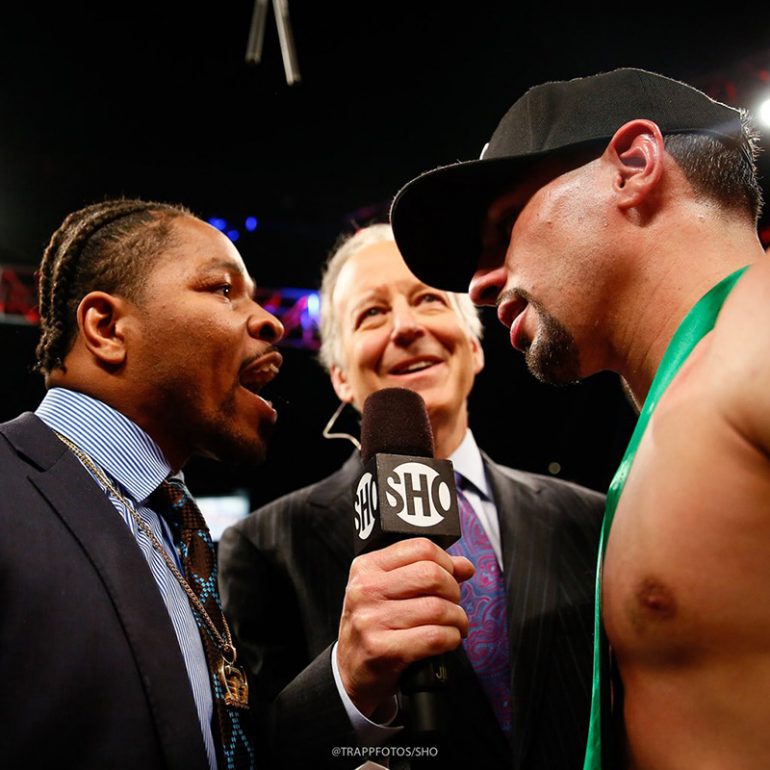 With Keith Thurman capitulating to harsh reality, that he’s been injury prone and inactive, thus giving up the WBC welterweight strap, we get word that vets Shawn Porter and Danny Garcia will be vying for the vacant strap.

You will recall that Porter and Garcia have each previously battled Thurman. In June 2016, the Florida-based boxer scored a tight, 12-round unanimous decision against the Ohio-born Porter. The judges ringside at Barclays Center all saw it 115-113 for Thurman.

In his next bout, Thurman battled Garcia, against at Barclays Center, and, this time, the 28-0 (with 22 knockouts) hitter scored a split decision victory.

Both men have said they’d dig another shot at the WBA titlist but it looks like we have an eliminator situation in place, with the Garcia-Porter winner getting a hand up on a sequel situation.

Porter checked in with the SiriusXM “At the Fights” show to chat with Randy Gordon and Gerry Cooney, and talked about how he sees his forthcoming tango with the Philly boxer, “You see multiple ways to beat this guy…On paper, this fight sells. I think this fight makes sense for every reason in the world to happen this year. And for us to fight for the WBC title just compounds everything. Styles make fights and this is one fight where you can pick either one of us to be the winner but I think there’s multiple ways that I’m gonna fight (Garcia) and beat him.”

Fans seem split on whom will have his hand raised. Porter looked to offer sound reasoning why he’ll better his 28-2-1 (with 17 KOs) record.

“We can go with the cliché that pressure busts pipes,” Porter said. “I don’t think he handles pressure well and, as of late, that’s the number one thing you’ve seen me do that’s pretty exceptional, and has won me tons of fights, is my pressure. To pressure a guy who, in my personal opinion, is not as mentally prepared for fights as he should be – that works to my advantage.”

Garcia is 34-1 (with 20 KOs); his lone loss is to Thurman. He was off almost a year but looked sharp in stopping Brandon Rios (TKO 9) last February.

“You take a look at Garcia fighting someone like Keith Thurman, who you think to be one of the hardest, heaviest punchers in my division, and Keith Thurman boxed him around the ring for 12 rounds and won a decision, in my personal opinion, unanimous,” Porter continued. “That shows that, if I prepare myself well, from a conditioning standpoint and from a boxing standpoint, to use my feet in the ring and use my range and distance, that’s another way to beat this guy.”

Porter finished making his case on why he’ll down Garcia when they face off. “You have him being somewhat of a surprise-puncher…I think there’s tons of things that I have to defend that offset that, and to make it so that his one-punch KO-rate is less of an advantage against me in the ring.”

Friends, who do you think will get the nod when the vet welters scrap?