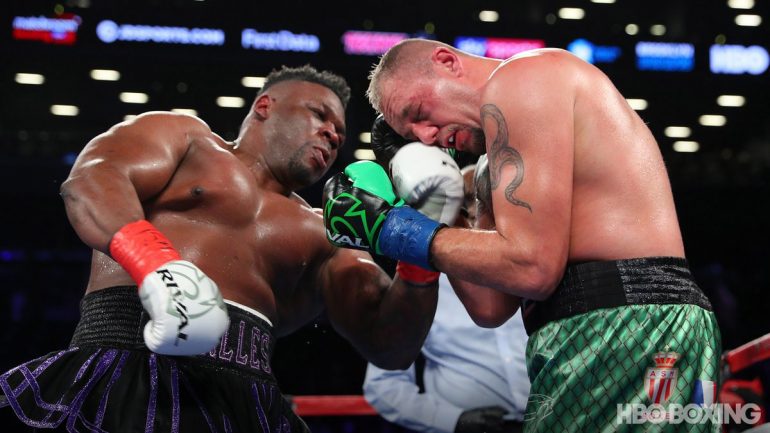 BROOKLYN, N.Y. — Jarrell Miller came into tonight’s bout the heaviest of his professional career and managed to go 12 rounds for the first time to win a unanimous decision against former world title challenger Johann Duhaupas (37-5, 24 KOs) to get one step closer to a possible world title bout against Anthony Joshua this summer. The official scores from ringside were 119-109, 119-109 and 117-11.

“I tried to get him out of there early,” Miller said immediately after the bout. “He’s a tough fighter and he ate all of my punches.”

The 29-year-old Miller weighed 304 ¼ pounds, completely filling out his 6-foot-4 height — 16 pounds heavier than his last outing, in which he stopped Mariusz Wach in November.

The Brooklynite Miller had Duhaupas hurt in the first and second round, landing his uppercut at will and setting up hard overhand right hands that moved the 6-foot-5 Frenchman across the ring. With much of the crowd pulling for their hometown hero to do something impressive, Miller did his best to oblige by mixing in body shots that left Duhaupas exposed for left hooks and uppercuts upstairs. Toward the end of the second round when it looked as if Duhaupas was ready to go, Miller landed a low right to the body, which caused the referee to break the action and allow Duhaupas time to recover. Duhaupas opted to not take the allotted five minutes, but the break was enough time to recover and survive the round.

Duhaupas’ punches started to gain steam in the third round as Miller took the aggression down a notch. Miller landed uppercuts of his own to stall Duhaupas’ power jab and create an opportunity to land something meaningful, but that one big punch never came.

Instead, Miller stalked Duhaupas and landed uppercut after uppercut, followed by lunging left hooks in hopes of putting together enough of a rally to get a stoppage, but Duhaupas showed heart and a tough chin in withstanding the assaults.

By the fifth round, Duhaupas’ right eye started to swell and Miller began breathing through his mouth. Miller would continue landing uppercuts, but there wasn’t much of a follow-up to do real damage. Duhaupas looked for an opening to land his power shots but was resigned to only throwing one punch at a time, which was not going to be enough against Miller.

Miller and Duhaupas continued to trade in the 11th round, which was the most entertaining of the bout due to the volume of punches that actually landed. As the round came to an end, Duhaupas appeared to have twisted his ankle and screamed out in pain as he hobbled to his corner. In between rounds, the referee and the ringside physician had a long talk with Duhaupas’ corner before allowing the veteran fighter to deservingly finish the bout on his terms.

Miller and Duhaupas traded shots in the 12th, but neither man had enough juice behind the punches to put the other away. As Miller stood in the pocket to trade, his bottom lip split wide open.

With the victory, Miller called out unified titleholder Anthony Joshua. Joshua’s promoter, Eddie Hearn, has said he discussed bringing Joshua to the United States in August for a championship defense, possibly against Miller, before taking on WBC titleholder Deontay Wilder. Miller has now defeated two of Wilder’s former opponents in Duhapas and Gerald Washington.