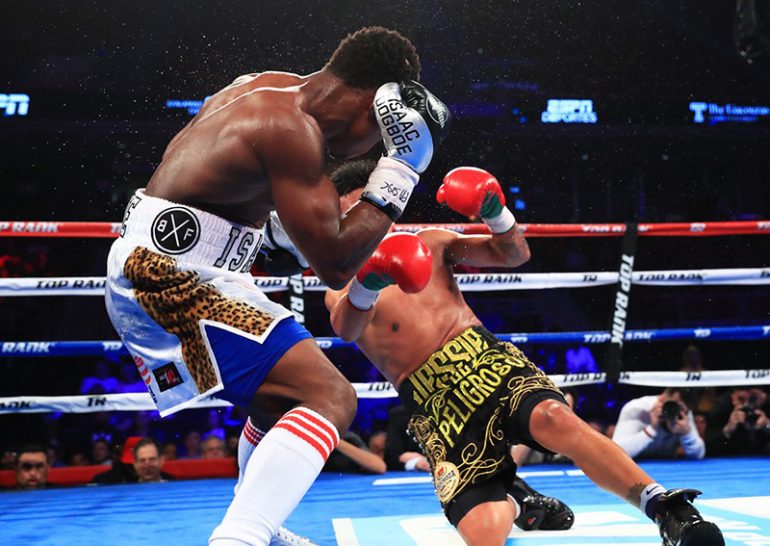 PHILADELPHIA — Isaac Dogboe knelt and looked up to the rafters of the Liacouras Center, holding his arms out wide, with the prevailing thought, “At long last! What an end to a journey!”

Dogboe overcame a first-round knockdown to win the ESPN-televised main event. At the time of the stoppage, Dogboe was up on all three scorecards (Glenn Feldman 96-91, Dave Braslow 95-93 and Dewey LaRosa 97-91).

“I knelt down and was thankful to God for what happened,” said Dogboe, 23, who knocked down Magdaleno in the fifth and twice in the 11th round. “I knew how hard this journey was and it was an amazing feeling.” 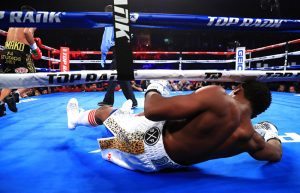 Dogboe got caught in the opening round vs. Magdaleno. Photo / @TRboxing

It didn’t start too well for the 2012 Olympian, when Magdaleno dropped him with a left cross in the first. But he remained patient, unfazed of any potential danger ahead. By the fourth, Dogboe’s face began bruising up. Maybe that raised Ghanaian’s sense of urgency, because he threw more decisive punches in the fourth.

“I never felt I was going to go down, and he put me down for the first time,” Dogboe said. “It was a learning curve. I made a little mistake, a little slip up and he caught me with a good shot. I got back up and I finished the job.

That opened the door to Dogboe’s textbook right uppercut to the chin that dropped Magdaleno in the fifth round. Smelling blood on the canvas, Dogboe began pounding away on Magdaleno, who defiantly stuck out his chin and shook his head, “No, you can’t hurt me!”

Still, the fifth was a pivotal round for Dogboe, who began taking the fight more to the defending titlist. In the sixth, Dogboe cornered Magdaleno, and with looping, wide punches went back on the attack again. With a welt under his right eye, and swelling developing over his left, Dogboe nailed Magdaleno with another sharp, potent right on the chin near the of the round.

After taking off a few rounds, Magdaleno came charging out in the early portions of the seventh, going to the body and the head. With less than two minutes left in the round, Magdaleno’s energy level dropped precipitously. Magdaleno was left absorbing shots against the ropes and the in the corners, unable to do anything to stem Dogboe’s relentless aggression.

In the eighth, with his title slipping through his hands and his energy level slowly depleting, Magdaleno showed some bounce in his legs. Dogboe, however, still played the stalker. Magdaleno was only throwing one punch at a time. Dogboe seemed to be getting stronger, firing two- and three-punch combinations.

And it only seemed to build and continue for Dogboe.

By the 11th, it seemed a matter of time. Dogboe was getting stronger and Magdaleno’s legs were going. A left hook dropped Magdaleno the first time, and it was another winging left hook that felled Magdaleno again. By then, referee Benjy Esteves Jr. saw enough and rushed in to end it at 1:38 of the 11th.

Jesse Hart (24-1, 20 knockouts) continued his comeback campaign by stopping Demond Nicholson (18-3-1, 17 KOs) at 2:26 of the seventh round of a scheduled 10-round super middleweight bout.

Nicholson landed a good right to Hart’s chin in the closing seconds of the first. In the second, Hart clubbed Nicholson with a right to the face. In the third, Nicholson looked like he lost his balance and fell. Referee Shawn Clark called it a knockdown and began counting. A replay confirmed Nicholson wasn’t knocked down by a punch. 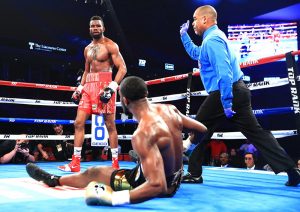 Hart made it official later in the third with an overhand right that felled Nicholson again. By then, the veteran Philly fighter began finding a rhythm.

Hart, at 6-foot-3, seemed to tower over the shorter Nicholson, who is listed at 6-foot. Hart stalked Nicholson, using his superior reach and power to wear down Nicholson, who stung Hart with a right uppercut in the final seconds of the sixth.

In the seventh, there was some confusion. When Hart knocked down Nicholson with a right to the crown of the head, Nicholson squatted down and both gloves touched the canvas. Yet, Clark didn’t count it as a knockdown. Clark seemed to lose control and Nicholson walked away, when Hart pursued landing rights upon rights, upon rights.

Finally, Nicholson crumpled to the canvas and Clark seemed to count to around 20. Clark apparently woke up and waved it over at 2:26 of the seventh round.

“I dream about the Ramirez rematch every night,” said Hart, referring to his only pro defeat to WBO super middleweight champ Gilberto Ramirez. “I want it! I want so bad! I know now that I can’t make mistakes when I’m in the ring with him. Let’s make it happen!”

Nicholson somehow thought he was finding his second wind, while he seemed out on his feet.

“I was just coming on, man,” Nicholson said. “The ref shouldn’t have stopped the fight. I was ready to continue. I’m going to talk to my team and we are going to file a protest with the commission.”

In a scheduled 10-round fight that was supposed to provide fireworks, the all-Philadelphia heavyweight matchup between heavyweight contender Bryant Jennings (23-2, 13 knockouts) and Joey Dawejko (19-5-4, 11 KOs) was a snoozefest. It actually wasn’t either fighter’s fault. They shouldn’t have been matched together in the first place.

Jennings was tactically smart, keeping the shorter, stubby-armed Dawejko, fighting at 233 pounds, the lightest he’s been in six years, at a safe enough distance. Every once in a while, Jennings would show “Tank” what he could do, pounding Dawejko, in his Rocco’s Auto Collision trunks, with a right to the head in the last 30 seconds of the fifth. In the ninth, Jennings let loose again with another lengthy, accurate right.

Dawejko could only come forward and bull rush Jennings. He rarely let his hands go, because he didn’t have much of an energy reservoir to let loose. As if implying he was going to stop toying with him, Jennings brutalized Dawejko in the 10th. He hit the Philly roofer with pounding jabs, and bounced more than a few rights off of Dawejko’s hard head.

Otherwise, it was a spirited sparring session and that was it.

“I did my best, I fought 10 hard rounds, but I should’ve picked up a little bit more,” Dawejko said. “I came in in the best shape of my life, but it is what it is.”

After the final bell, Jennings, as expected, won easily by scores of 98-92 on all three scorecards. Jennings then was handed a big gold cup, for something called the Pennsylvania State heavyweight title, which has only been fought for nine times since 1935.

“That’s pretty much the Joey that I expected,” Jennings said. “There was a lot of hesitation from the both of us. As many prayers as he launched, he didn’t really land any. He landed a couple, but he was launching prayers. Joey has thick legs, and I just trying to be cautious and not get caught with some desperate shot. I knew going into the eighth, ninth and 10th rounds that I was winning.”

“I’m the same Shakur,” Stevenson said. “This training camp, we’ve been working on power. Nobody wants to be on my side when I’m going six rounds or eight rounds straight and doing good against these opponents. Now, with these knockouts, everybody is going to be on my side.”