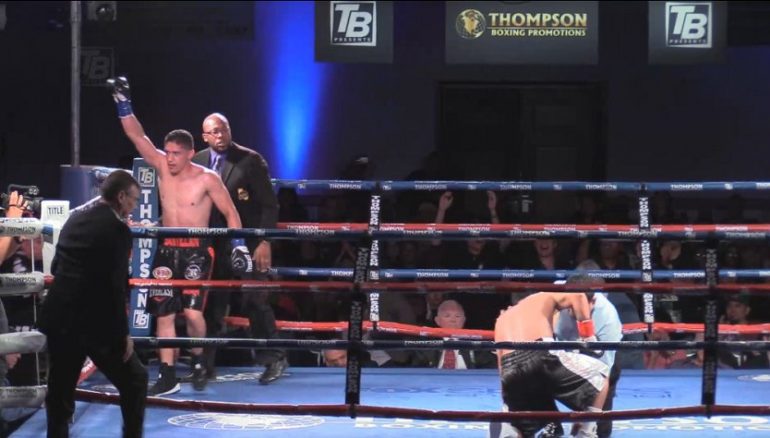 ONTARIO, California – Welterweight contender Giovani Santillan has been known to outbox opponents, but he has been displaying his power of late and Friday night was no different.

Santillan (24-0, 14 knockouts) knocked out Alejandro Barboza in the second round at the Doubletree Hotel in this Los Angeles suburb.

The San Diego southpaw has had four stoppages in his last five fights, including an impressive second round win over Sammy Valentin on July 15.

Santillan was on the attack from the opening bell, mixing his attack to head and body. That aggression paid off in Round 2, when a left hand to the mid-section dropped Barboza to one knee. Referee Raul Caiz Sr. completed the count at 2:23.

Santillan is currently ranked No. 5 by the WBO at 147 pounds. The 26-year-old boxer-puncher is positioning himself for an opportunity to fight for a world title and believes impressive and dominant victories will send a message.

“I told everyone that I was going to finish this fight early and that’s what I did,” said Santillan. “I normally don’t predict knockouts, but I’m fighting with such confidence right now that I think I can beat anyone in the welterweight division.”

In the co-feature bout of the Thompson Boxing card, bantamweight Saul Sanchez remained unbeaten with a hard-fought six round unanimous decision over Sam Rodriguez.

The taller Sanchez was effective in closing the distance, and he unleashed an array of combinations which frequently concluded with a hook to the body.

Rodriguez (5-3, 3 KOs) attempted to fight back, finding some success on the inside, but he was stunned at least twice in Round 5. Sanchez pressed the action early in the sixth but was content to box until the final bell.

“I felt like I could land a combination whenever I wanted,” said Sanchez, who signed a promotional deal with Thompson Boxing earlier this year. I found the angles every round and I know I hurt him a few times. I could tell he was tired. He was just trying to finish the fight.”

Junior featherweight Jonah Flores decisioned Neri Garcia (1-4) over four rounds. All three judges scored the bout 40-36 in favor of Flores, who improves to 4-0.