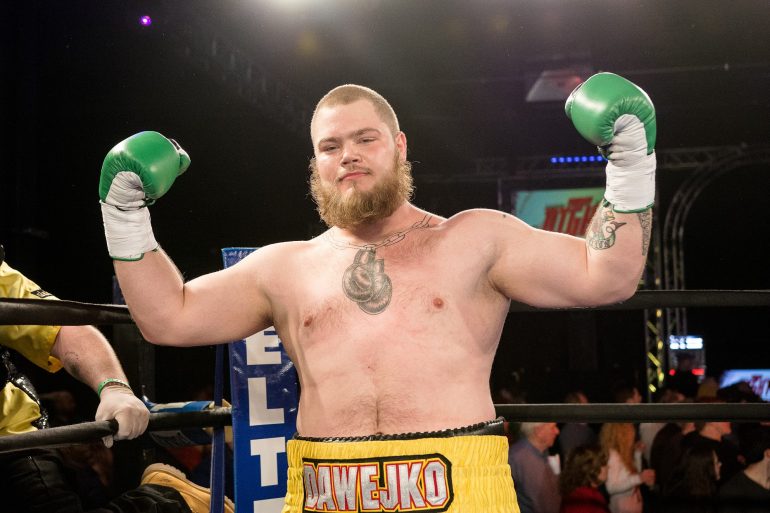 The first impulse when someone sees Joey Dawejko in the ring for the first time is to laugh. After all, the 27-year-old Philadelphian resembles a bar bouncer more than he does a professional fighter. At 5-foot-10, 240 pounds, Dawejko looks more like a modern-day “Two Ton” Tony Galento than he does Wladimir Klitschko.

Dawejko is an everyman in a hard hat, an anachronism of a black-and-white era, where a desperate promoter finds the first guy walking by off the street and throws $250 bucks at him to fill in because a fighter fell out.

That’s the assumption about Joey—and to a degree, it is Joey.

Looks, however, can be deceiving, and Dawejko has the personality and intelligence to know the truth: He can fight.

He had such a distinguished amateur career that he one time beat heavyweight contender Bryant Jennings in a Golden Gloves tournament. It’s the same opponent Dawejko (19-4-4, 11 knockouts) will be facing on his biggest stage this Saturday night, as part of the Top Rank ESPN card taking place in Philadelphia’s Liacouras Center on Temple University’s campus.

But the most explosive fight on the card could come between the old amateur rivals, Dawejko and Jennings (22-2, 13 KOs). It’s a scheduled 10-round fight, which Dawejko is making great strides to prepare for, working with Hall of Fame trainer Freddie Roach for the first time.

“I know what people think, I’m the underdog, but I’ve been an underdog my whole life,” said Dawejko, the father of four girls, who was a roofer while he was building his boxing career. “This is a lot different for me. I used to be on the roof taking calls for fights on a few days’ notice.

“It’s happened to me a lot. This is my first real training camp. Bryant Jennings is a great fighter. He’s a top-15 heavyweight and it means everything to me. When I beat Bryant, this will put me on another level. I like Bryant. I respect Bryant. I know he doesn’t think that I’m in his class. That will all change April 28. He’s a great person and a great father. I have kids I need to feed, and that’s my drive.

Dawejko has had a constant knock throughout his career—he’s never been in great shape. Joey has always had the confidence. Now working with Roach, Dawejko says, his confidence has reached a new level.

Roach has given Dawejko the time in the gym and is bringing out dormant boxing skills. Dawejko was 242 pounds in his last fight, and there is a chance he’ll be lighter this time around.

“I’ve always fought bigger guys, my problem comes when I fight guys my size,” said Dawejko, who had 68 amateur fights and started boxing when he was 10, after being inspired by going to a fight with his grandfather at the legendary Blue Horizon. “I’ve been fighting heavyweight since I was 15. I had my share of fights in the streets, but most of my fights came in the amateurs.

“I would go to all of these gyms in Philly. I was the only white kid around, and I would go there, and beat them all up. I used to be called ‘the white kid,’ because no one really knew my name then. My last amateur fight I fought Bryant at the Blue Horizon and I beat him.

“I won the fight, turned pro, and gave my spot up at the nationals to Bryant. He’s done a lot in a short period of time. You can say I launched his career. When I turned pro, I got a lot of fights on short notice. I took a lot of fights on a week, a few days, I never really trained for all of my early fights. It’s why my record looks so messed up.

“People look at my record and think, ‘This dude sucks.’ People don’t know the story behind it. I was winning fights without really training. You can say that I’m like the real life ‘Rocky,’ but I’m not a leg-breaker or anything like that. Or not recently [he laughs], but I never did anything like that.

“I was a bouncer though. All of that is behind me. Everyone will see the real Joey Dawejko on Saturday. It’s the first time I’ve ever been in great shape as a pro. Bryant is not used to fighting a guy like me. It will be a lot easier than people think.”

He has been doubted before that he’s more fight than fat—and proven many wrong.