Will Kosei Tanaka conquer a third division in 2018? 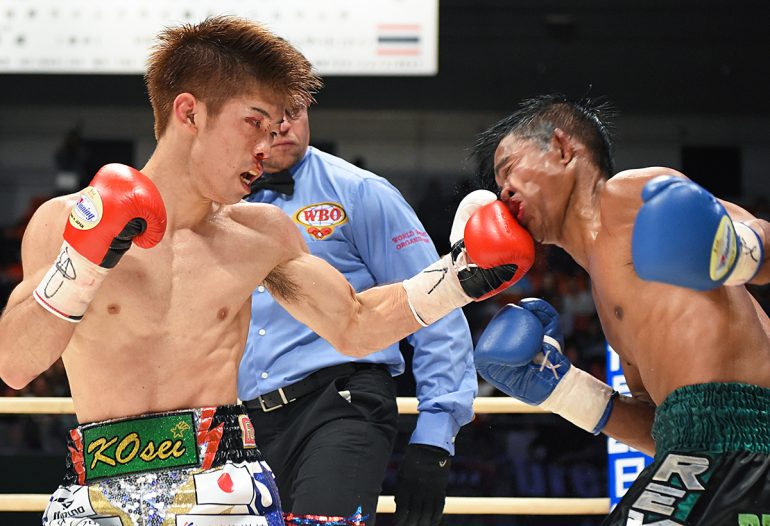 On March 31, undefeated former two-division world titleholder Kosei Tanaka made his flyweight debut with a ninth round stoppage over previously unbeaten Ronnie Baldonado at the International Conference Hall, Nagoya, Japan.

It was an impressive performance by the 22-year-old boxer-puncher, who was also returning from a double eye socket injury sustained last September.

“I am very happy to be able to win this fight without any injuries,” Tanaka (11-0, 7 knockouts) told RingTV.com through Tomoyuki Kataoka. “I was able to control my physical condition and weight at flyweight very well, compared with at junior flyweight. This experience gave me increased confidence in boxing at flyweight.”

With that win in the books, Tanaka, is now ranked No. 1 by the WBO in the division and has titlist Sho Kimura in his crosshairs, though he remains unsure if that will be his next outing.

“I would like to fight for a world championship as soon as possible,” he said. “I do not have any idea whether my next bout will be against Kimura or even for a world title.

“I have experienced many world title bouts from early in my career and I feel less motivated, unless it is a world title fight.”

Tanaka, who is ranked No. 6 by THE RING at 112 pounds, previously held the WBO titles at 105 and 108 pounds. He had been scheduled to face countryman and WBA beltholder Ryoichi Taguchi in a unification match last December.

However Tanaka suffered the eye socket injury in a title defense last September against Palangpol CP Freshmart (also known as Rangsam Chayanram). Thankfully the young fighter didn’t require surgery and, after a period of recuperation, was able to return. It did however curtail plans to face Taguchi at the end of the year.

Tanaka was understandably disappointed for himself but also showed compassion for his countryman.

“After the injury, I felt very sorry especially for Taguchi, the promoter of the unification bout and, of course, my fans,” he said. “I was very disappointed, since I got injured prior to such a hot match.”

Former WBC junior featherweight champion Kiyoshi Hatanaka is Tanaka’s handler and was very happy with his client’s performance against Baldonado, saying, like Tanaka, he’s unsure of when they will face Kimura.

“No date has been decided,” said the former champion turned manager/promoter. “It has to happen by September because we are the mandatory challenger.”

Long-term, Hatanaka has set a big goal for his prized pupil.

“His aim is to win the world titles in the five weight classes,” said Hatanaka. “We already said on such intention to (WBO President) Francisco “Paco” Valcarcel.”