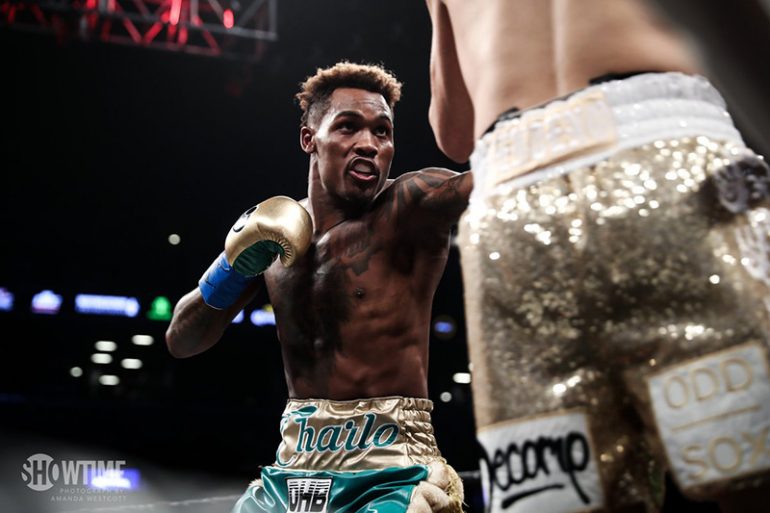 The Charlo Brothers aura upticked, violently, another notch, as the 160-pound Charlo, Jermall, smacked down Hugo Centeno Jr. with a left hook in Round 2 that left the California boxer unable to rise. The fight was televised live on Showtime on Saturday from Barclays Center in Brooklyn, N.Y.

Only 55 seconds elapsed in the second, as the combo platter from Charlo resonated nastily on Centeno.

A lil head butt, a right behind the ear and the finisher left hook sent Hugo down in a heap, unable to beat the count.

After, Charlo announced his intention to go after bigger game at 160. “It’s been an amazing journey to get here. I’m a two-time world champion. Bring on Triple G! I want that fight!”

Fans at home likely asked themselves if this fight was makeable, being that Mall is a PBC guy and GGG isn’t. “The networks and the teams can figure out how to get the Triple G fight done. I have the best manager in the world. I’m 27-0 with 21 knockouts. Everybody sees it. What more can I say?”

Yes, the aura got a boost, him and his bro are now known further and wider as assassins. “Everybody has always avoided me and from now on, this is how it’s going to be. You see what you get.”

During this fight week, Charlo was, as in now typical, wound pretty tight, not prone to grin or engage in easy back and forth with media. The twins made news when Jermell, the “little” bro, who fights at 154, declared he was barred from entering and visiting a Manhattan health club, to see his bro, who was working out to make weight. He accused the facility of engaging in racial bias. Then, Jermell caused a minor ruckus at the weigh in, on Friday, when he went in on Adrien Broner, with an expletives stream, as his brother and Broner were in weighing-in mode. Yes, drama was front and center in the lead-up, and there was more excitation in the scrap.

In the arena, there was a different sort of buzz than what we’d felt before, a bit more nerves being felt by patrons, many of them, after the two weeks of beefs real and maybe less so (Floyd Mayweather’s vehicle was shot at in Atlanta two weeks ago, and Adrien Broner and a B-plus rapper went back and forth on social and word spread the rapper had friends in low places who’d maybe cause trouble). Chatter erupted as these two sere set to collide, that there’d perhaps been a violent altercation inside the arena, one not involving fists. One press man told me he was locked in the media room, for safety purposes, and one local fight figure told me that indeed there had been a confrontation between persons repping rival rappers.

The WBC interim middleweight crown was up for grabs, for the record. Charlo sent notice that he wanted it, bad. He blasted in on the Cali boxer, who by the way was quite composed, unflappable looking, in this fight week. But Charlo was in destruct-and-destroy mode, launching aggressive jabs as he backed Centeno to the ropes, where he launched a vicious set of tosses that had Hugo in a world of hurt.

These Charlos keep it up, and they will soon be getting mainstream press, a bunch of it. Because, c’mon, hello, identical twin boxers, both badasses, who’s seen that before?