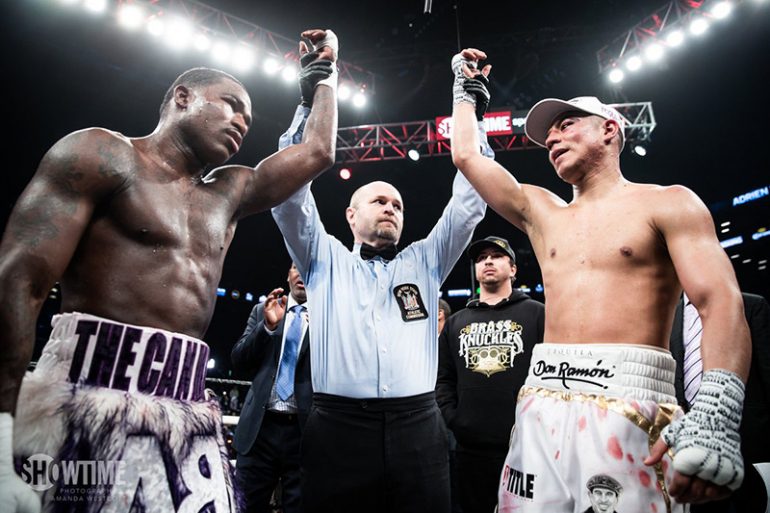 Adrien Broner and Jessie Vargas fought each other to a hotly contested majority draw. Photo / @ShowtimeBoxing
21
Apr
by Ryan Songalia

BROOKLYN, N.Y. — After 12 rounds of an entertaining battle, Adrien Broner and Jessie Vargas had to settle for a majority draw Saturday at Barclays Center.

It was not the verdict that either man would have wanted, but it was probably the appropriate decision given the close action which was at times difficult to separate.

“F–k all that, I beat him,” a contentious Broner (33-3-1, 24 knockouts) said after the fight, getting in Vargas’ face to declare that he beat him “like he got suspended from school.” 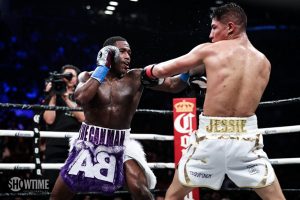 “I was connecting with right hands. I got warmed up in the early portion of the fight before taking over,” said Broner, who worked with trainer Kevin Cunningham for the first time after dismissing Mike Stafford.

Punch stats showed that Vargas was the busier of the two, throwing 839 punches to Broner’s 507, while landing slightly more at 203 to 194.

Vargas (28-2-1, 10 KOs) himself was working with a new coach, Mike McCallum, says he was bothered by the swelling under his left eye, which then opened into a cut in the championship rounds.

Vargas naturally disagreed with Broner’s assessment of the fight. 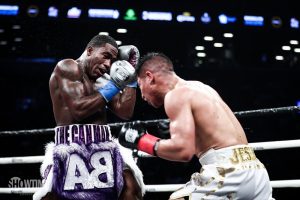 “I thought I won the fight. At the end of the day I can’t argue because I was fighting on the inside of the ring so I don’t know what you saw from the outside. I was landing clean blows,” said Vargas.

The fight had been overshadowed by reports of Broner’s beef with rapper Tekashi 6ix9ine, and increased police presence was visible throughout the building and exteriors, but all of that was in the periphery by the time he made his way to the ring with rap star and constant companion Rick Ross, electrifying the crowd of a reported 13,964 on hand.

After a do-nothing first round, Vargas took over in the second, burying Broner in activity and landing several shots upstairs and downstairs. Vargas’ body work, likely inspired by his “bodysnatching” trainer, was consistent throughout, but was matched, and in spots, surpassed by Broner’s own body punching.

Broner began to take over the fight late in the ninth round, when a volley of blows, capped off by a left uppercut which rocked Vargas’ head back, brought the crowd to its feet. Broner finished the tenth like that as well but didn’t do much in the eleventh and twelve rounds to separate the two.

A draw was not the way Broner had hoped the 144-pound catchweight fight would turn out following his decision loss to Mikey Garcia last July, and Broner let it be known in a profanity-laden joint post-fight interview with Vargas

“You bruised up,” said Broner.

“Your face swelled up. You need peroxide and alcohol,” said Broner.

Asked whether he wanted a rematch, Broner answered that he’d be willing to do the fight again while managing to lower the bar one last time for the event and its promotion.

“Hell yeah but let’s go to my town. I want to fight him where I’m from, its hella Mexicans and s–t in here, everybody booing me and s–t. They want rice and chicken. I want some motherf–ckers that want some Coneys [a hot dog topped with Cincinnati chili and shredded cheese] around me,” said Broner.