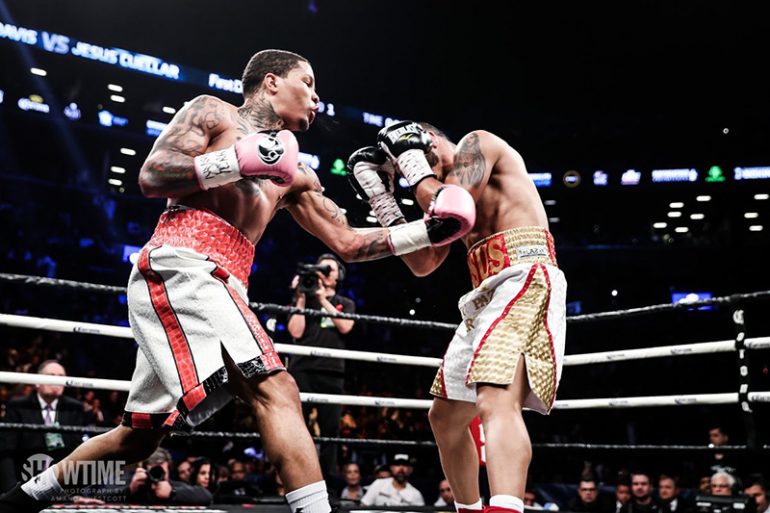 NEW YORK – Gervonta Davis couldn’t have scripted a better return to the world title picture as he systematically picked apart and destroyed Jesus Cuellar in three rounds at Barclays Center in Brooklyn, N.Y.

Davis (20-0, 19 knockouts) scored a knockdown in the second round on a straight left under Cuellar’s ribs, and followed up in the following round with a body shot knockdown before a volley of blows punctuated by an uppercut dropped Cuellar (28-3, 21 KOs) for a third time. The time of stoppage was 2:45.

The scores who drove up north from Maryland to support Davis were not disappointed as the 23-year-old looked sharp and focused from the opening bell, making Cuellar pay for every step forward he took. The disparity in speed was overwhelming, and the outcome was predictable fifteen seconds after the first bell.

Cuellar had not fought since December of 2016, when he lost a split decision to Abner Mares at featherweight. Davis had moved his training camp out of Baltimore to West Palm Beach, Fla. under new trainer Kevin Cunningham, and came in under the 130-pound limit after being stripped of the IBF title prior to his fight with Francisco Fonseca for weighing in two pounds over the limit.

“On the undercard of [Floyd] Mayweather-[Conor] McGregor fight, I just wasn’t focused. It was the second time fighting on his card so it got to my head and it showed,” said Davis.

“After the fight, I went home and talked to my team and we decided it was time to leave Baltimore. I’m focused and it showed because I’m a champ again.

“There’s always bumps in the road when you want to become successful. It’s all about how you bounce back and tonight I showed that I’m a true champion.”

Floyd Mayweather Jr., who promotes Davis, had said he was considering matching Davis with Vasyl Lomachenko, who is heading up to 135 to face Jorge Linares, but Davis expressed interest in facing the winner of the Tevin Farmer-Billy Dib fight, which will decide the vacant IBF junior lightweight title.