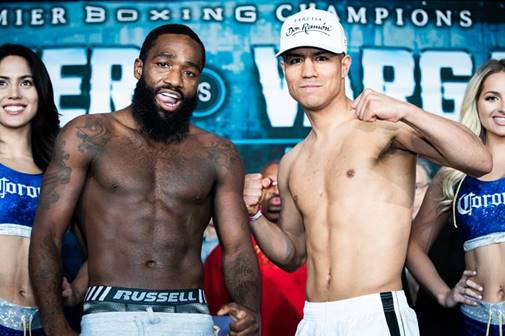 Saturday’s offering on Showtime features two fighters with a history of problems at the scale, but there was no controversy this time.

Both Adrien Broner and Jessie Vargas made weight Friday, one day before they’ll compete in a 144-pound catchweight bout. Broner missed weight on the first attempt, but after stripping naked, hit the limit of 144 pounds for his fight against Vargas in Brooklyn, New York.

“We had a helluva camp,” Broner said. “It was the first time doing a full camp with Uncle Kev, which is what I call him. You know him as Coach Kevin Cunningham. It was very militant, but we got through it. It’s something that was always there [urgency]. You know, something had to be brought out of Adrien Broner and tomorrow night I will be victorious and I will put on a good show.”

Vargas, who owns a four-inch height advantage, is a full-fledged welterweight, but he made weight comfortably at 143.75 pounds.

“All of the hard work is done,” Vargas said. “Now all I have to do is go out there and entertain my fans. I have a great team behind me that keeps me focused and helps me avoid any distractions or negativity.”

Gervonta Davis, too, has faced many issues with his weight. He lost his belt in August after missing weight for his scheduled title defense against Francisco Fonseca.

But on Friday, he weighed 129 ahead of his fight with former titleholder Jesus Cuellar. The Argentine weighed 129.75 pounds.

Jermall Charlo faces off against underdog Hugo Centeno in the second-to-last bout of the night, and the winner will be the mandatory challenger to the WBC middleweight title Gennady Golovkin owns. Charlo weighed in at the limit of 160 pounds; Centeno was 159.5.