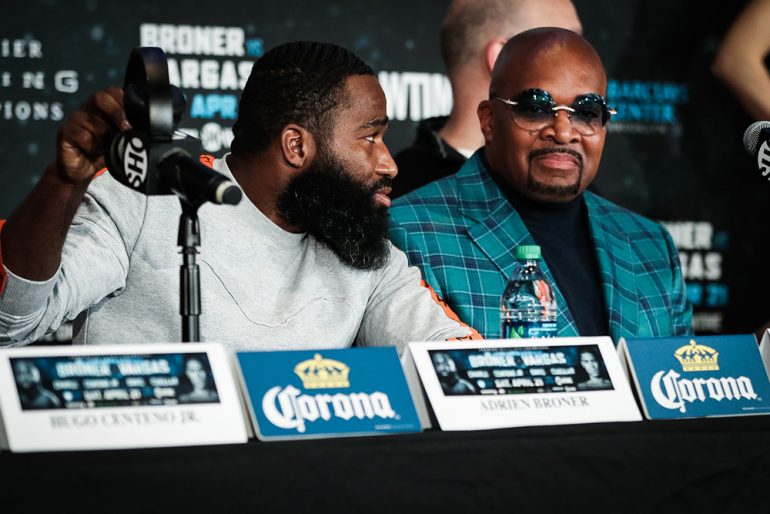 Leonard Ellerbe took it pretty well in stride after getting zinged by Adrien Broner at the Thursday press conference at Barclays Center.

“I really don’t feed into anything,” he said. “I’m the CEO of Mayweather Promotions, we’re the co-promoter of this card — done a phenomenal of promoting this event. I’ll continue to do that. As I’ve said, this isn’t about me, whether someone likes me, I could care less. I could care less. We put on the biggest and best events, and these are the things they should learn from, with being respectful. In this sport, you’ll quickly find out when you conduct yourself like a professional, like a businessman, it all works out in your favor. I don’t have to fight Saturday night. I’m promoting the event along with Lou (DiBella) and TGP, and we have a spectacular event and that’s what we’re looking to do.”

I did note that he did stand up and tell Broner he wouldn’t be disrespected like that, but Ellerbe didn’t want to revisit. I don’t get caught up in that personal stuff, he said.

Jessie Vargas is an ultra professional and is super accessible, he said, providing a compare-and-contrast, but “we’re not his promoter.”

“No hard feelings,” Ellerbe added, but no, he won’t be disrespected. “You (Broner) didn’t have that kind of energy a couple weeks ago when fighters were talkin’ … Again, I don’t pay attention to any of that stuff.”

Ellerbe said his mom told him that people will call you names when they admire what you’re doing. In other words, take the smack talk in stride — and with pride, in a way.

My three cents: Ellerbe handled the barbs like an ace. He stood behind Broner when AB took questions from the scrum after the formal presser, sending a message that he would not be diminished.