It’s Adrien Broner against the world 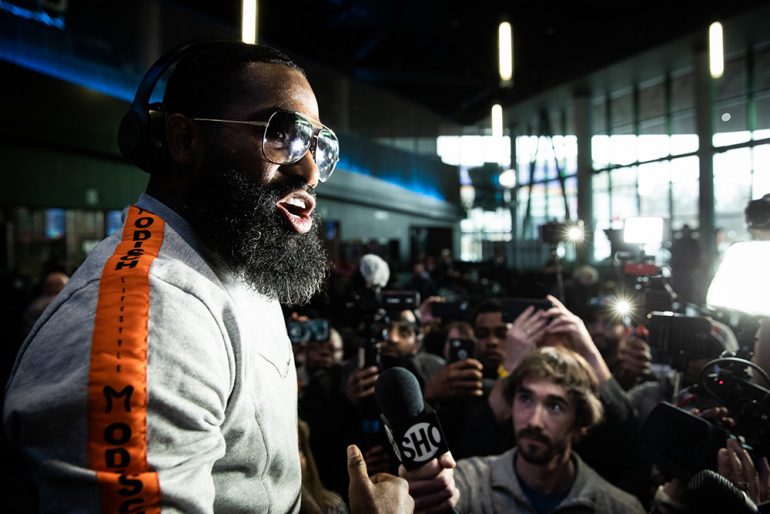 Broner during the heated build-up (thanks to Tekashi69) to his fight with Jessie Vargas at Barclays Center in Brooklyn, N.Y. Photo by Amanda Westcott / Showtime
19
Apr
by Ryan Songalia

NEW YORK — It’d be odd to see Adrien Broner at a press conference observing all customs of decorum while wishing his opponent a good fight and may be the best man win. It’s just not how Broner is wired, and at this point he can’t afford to allow his opponent even the token gesture of best wishes.

Broner, who once seemed destined to ride Floyd Mayweather’s worst excesses into similar pay-per-view stardom, is reeling following losses in his three biggest fights, the most recent of which was a listless performance while being outboxed by Mikey Garcia last July. At Thursday’s press conference for his fight this Saturday against Jessie Vargas, Broner had made up his mind that he wanted no part of allies, real or imagined, and took aim at nearly everyone around him.

“I hope y’all give me credit, I hope y’all don’t just throw it under the rug, because I’m gonna beat his ass,” said Broner (33-3, 24 knockouts), before taking aim at the man to his left, Mayweather Promotions CEO Leonard Ellerbe. “And I know all y’all against me. Him right here, Leonard Ellerbe, they with this bitch-ass n—a. Leonard a bitch-ass n—a too.”

“First off, you don’t disrespect me like that,” Ellerbe replied indignantly.

“Yeah, you ain’t with me,” Broner shot back before telling Ellerbe to “shut that soft-ass s—t up.”

For all the talk about this being a crossroads fight and how a loss could render Broner a big-name B-side, he’s shown little interest outwardly in Vargas. Instead, the fight’s lead-up has centered around his beef with Tekashi 6ix9ine, a Brooklyn-based rapper with the not-so-subtle numbers 69 tattooed on his face, who generates millions of Instagram views in short periods of time and who recently failed his court-mandated GED test and as a result may or may not have to register as a sex offender.

While Vargas was at Gleason’s Gym Wednesday getting in a workout, Broner was at a jeweler whom 6ix9ine had previously patronized, dropping what he alleges was $100,000 to show up the 21-year-old rapper. 6ix9ine had bet $300,000 against Broner on Saturday night in a social media video, and told him to “check in” when he gets to New York.

Broner may not have shown Vargas much respect Thursday, but it’d be in his best interest to do so on Saturday. Vargas (28-2, 10 KOs) is a two-division champion who has shown lately that he’s got better power than his KO percentage suggests. Vargas has had his opportunities at a superstar win, falling one big punch short of finishing Tim Bradley in the 12th round in 2015 and being outclassed by Manny Pacquiao the following year, but a win over Broner would establish him as a big somebody in the sport.

“I can’t wait, yeah, look at me,” Vargas said, raising his voice to Broner, who trolled throughout Vargas’ opening statements by playing Vanessa Carlton’s “A Thousand Miles” on his headphones and placing them over his microphone. Broner later repeated the antic when asked for his opening remarks and mocked Vargas’ bilingual address, switching to a stereotypical Mexican accent and calling Vargas a “puto,” a homophobic slur. 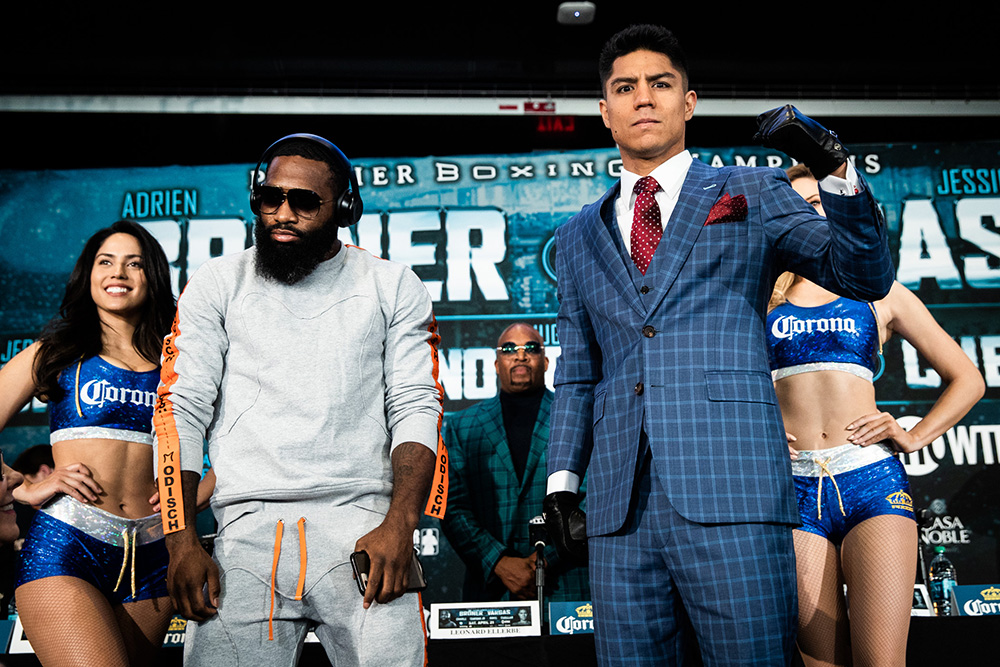 Vargas, clad in a blue-checkered suit and leather gloves, made every attempt to provide the event with the gravity hoped for by organizers. Broner, wearing sweat pants and large headphones, seemed determined to undermine the proceedings.

“Uhh, this a fake-ass press conference. This s—t’s garbage,” said Broner at one point. For all the trolling and joking, Broner had his points, bringing up the seemingly double standard of questions about losing his biggest fights to Marcos Maidana, Shawn Porter and Garcia.

“Quit talking about all them losses. You ain’t them. You gotta beat me first, no homo.”

Broner, 28, acknowledges the 144-pound catchweight bout is an “important fight” and his first with Kevin Cunningham, who had worked with Corey Spinks and Devon Alexander, as chief second. Vargas, also 28, is likewise working with a new trainer for this fight, having hired former champion Mike “The Bodysnatcher” McCallum after several fights with Dewey Cooper in his corner.

Lou DiBella, the promoter for Saturday’s card, which will be televised on Showtime, summarized Broner’s position succinctly: “You don’t have to be loved by everybody. You have to have people care about you to want to see you.”

Broner, for his wins and his losses, has succeeded in keeping people’s interest, much the way people tune in to car chases or refresh TMZ to find out which celebrity is in peril today.

With a win, the former four-division titleholder can point out to the crowd and say he told us so, but a loss means another round of “About Beatings” and other mockery he’s seen too frequently in recent years.

It may not be the sort of motivation Broner needs at this stage, but it’s the kind he wants.