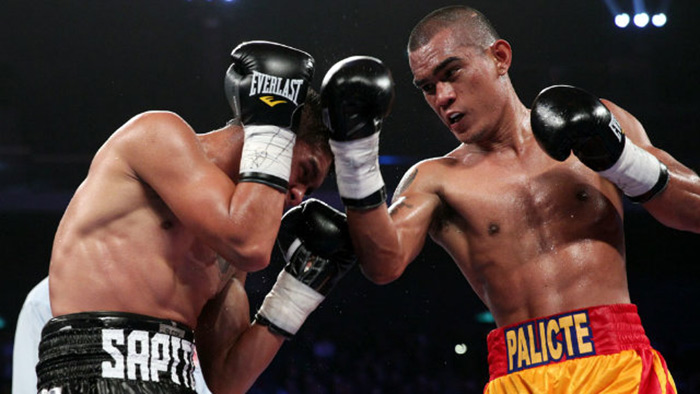 Not since 1925, when Pancho Villa slugged it out with Clever Sencio in Manila, have two Filipino boxers squared off in a world title fight. That drought is already set to end when Jerwin Ancajas stakes his IBF junior bantamweight title against mandatory challenger Jonas Sultan on May 26, but the next all-Filipino title fight may not have to wait another 93 years.

After Naoya Inoue vacated his WBO junior bantamweight title and moved up to 118 pounds, Donnie Nietes announced his intention to drop the IBF flyweight belt and move into a fourth weight class. The WBO installed Nietes as its No. 1 contender, which puts him at the front of the line to vie for the belt.

Right behind him at No. 2 is his compatriot Aston Palicte, who not only is also from the Philippines but comes from the same province, Negros Occidental, as “Ahas” Nietes.

Palicte says he’s awaiting word on what the Puerto Rico-based sanctioning body orders for its vacant belt, but wouldn’t pass up an opportunity to mix it up with one of his country’s most accomplished fighters in recent times.

“Nietes is a tough fighter, also a world champion, but then of course I’d be more than willing to fight with him if WBO decides we’re both up for the title. It would be an honor for me to fight with him,” said Palicte (24-2, 20 knockouts), who at 27 is eight years Nietes’ junior.

“I’m excited to know who will we fight, but most probably Donnie because we are top two.”

The idea of Filipino vs. Filipino fights had been scoffed at by the Filipino boxing establishment in the past, but many are warming to the idea of having their countryman guaranteed to leave with the belt, regardless of the outcome.

“I don’t have any problems with two Filipinos fighting for a world championship, in fact we should be proud that the top two are Filipinos,” said Palicte’s manager Jason Soong, who handles Palicte alongside promoter Roy Jones Jr. Boxing Promotions.

“Rankings are there for a reason… the top two available fighters should fight, doesn’t matter where they’re from.”

The only instance Soong sees an issue with are when two fighters are close friends or former training partners, as was the case when Palicte decided to bypass an opportunity at an elimination bout to face Ancajas, a former stablemate whom he celebrated with in the ring the night Ancajas won his belt.

Others around the rankings are the third-ranked Roman “Chocolatito” Gonzalez, the former pound-for-pound champion who is rebounding from two straight losses to Srisaket Sor Rungvisai. Gonzalez is set to fight an opponent to be named in the Gennady Golovkin-Vanes Martirosyan co-feature on May 5. Right below him is McWilliams Arroyo, who upset Carlos Cuadras on the SuperFly 2 card on February 24.

For now, it’s all a matter of waiting and seeing.

“I tried reaching out to [Nietes’ promoter ALA Promotions] and they said the same, just waiting for the WBO,” said Soong.