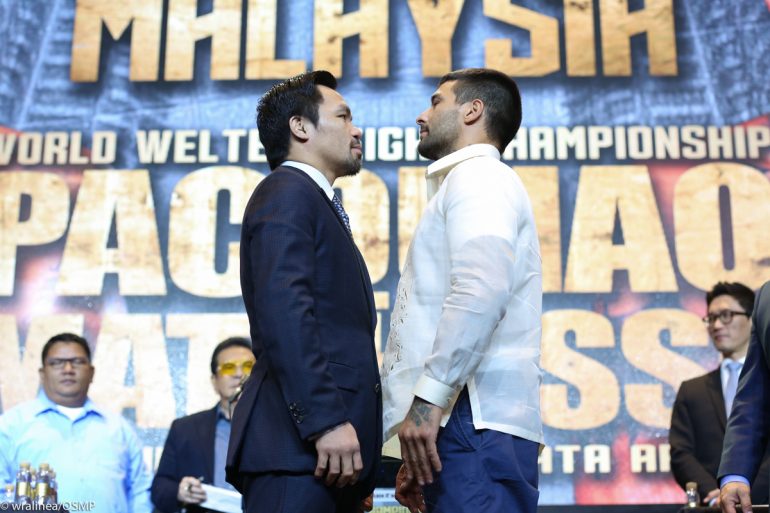 It will be a year and nearly two weeks to the day since Manny Pacquiao last stepped foot in a boxing ring, by the time he steps between the ropes to face Lucas Matthysse on July 15. It’s a long layoff for any boxer, particularly one who turns 40 years old later this year, and his opponent’s team didn’t miss a chance to suggest that time is no longer on his side.

“This is Matthysse’s time now. Manny Pacquiao’s time is over and we’re gonna win the fight,” said Mario Arano, Matthysse’s manager, at Wednesday’s kickoff press conference for their fight, which will take place on July 15, in Kuala Lumpur, Malaysia.

“Obviously (Pacquiao)’s still a great fighter but since the knockout of (Juan Manuel) Marquez, I think that he’s not the same fighter and he’s not in his prime anymore,” said Matthysse (39-4, 36 knockouts), who wore the Philippines’ traditional formal wear known as a “Barong Tagalog” for his first trip to the country.

“It’s my first time defending my title, which was very hard to obtain. I’m going to defend it to the death,” added Matthysse, who was also accompanied by Golden Boy Promotions’ President Eric Gomez and publicist Ramiro Gonzalez.

(Writer’s note: Matthysse is deemed the WBA’s “regular” welterweight titleholder, a distinction unrecognized by THE RING Magazine and RingTV.com.)

Pacquiao, who toggles between first-term Philippines senator and part-time fighter these days, wore his promoter’s costume for the event at the City of Dreams casino, reading a prepared script from the podium as the lead promoter for the event. This will be the first significant boxing fight in Malaysia, since Muhammad Ali defended his heavyweight title against Joe Bugner in the capital city in 1975.

Not only does Pacquiao have to prove he is still a relevant fighter in the sport; he’s also trying to show that MP Promotions can handle the task of handling a major event.

“I will not predict this fight…but I will do my best to win convincingly. If I could have a chance to finish it right away, I will finish it.”

Pacquiao’s adviser Michael Koncz said he was “pleasantly surprised” by the job MP Promotions’ staff had done putting together the press event and addressed Pacquiao’s longtime promoter Top Rank, which was represented at the press conference by Brad Jacobs, and will distribute the fight in the United States through pay-per-view.

“(To Top Rank CEO) Bob Arum, it can be done and MP Promotions can do it.”

Koncz pointed out that Pacquiao isn’t returning from his shocking decision loss to Jeff Horn last year in Australia with an easy tune-up, and that Matthysse represents a dangerous fight, despite being in the same age bracket as Pacquiao at 35. He has won two straight since his knockout loss to Viktor Postol in 2015, and most recently fought in January, when he finished Thailand’s Tewa Kiram in eight rounds.

“We chose Matthysse…because I believe he has guts. He is an aggressive fighter, and he can create more action in the ring than the fight that I had before,” said Pacquiao.

“His percentage of knockouts is high, so we don’t underestimate him.”

Pacquiao sought to clarify his training situation, saying that Freddie Roach, who has worked with him since 2001, remains like “close family” and that he could bring back Roach for future fights, even if he decides to go with assistant trainer Buboy Fernandez as chief second in Malaysia.

Roach had recently said in a statement that he was “hurt” upon learning from a press release that he wouldn’t be training Pacquiao in the future. Pacquiao has since distanced himself from the statement.

“I didn’t make any decision yet about Freddie Roach but if, assuming I will make a decision about Freddie Roach and choose Buboy Fernandez as head coach for this fight, I’m still not closing the door with Freddie. We still want to try and experience that Buboy will handle this one fight and, after that, go back to Freddie,” said Pacquiao.

Pacquiao didn’t sound like a man who had contemplated retirement, even if he were to sustain a second straight defeat. “Hanging gloves up, I don’t know yet. But in my life, I never think negative. I always think positive,” said Pacquiao.

Asked about what he’d do should he emerge victorious, he has his hopes set on staging a fight in the Philippines, with reigning WBO 130-pound titleholder Vasyl Lomachenko atop his wish list.