Romero Duno: ‘I want a championship fight this year’ 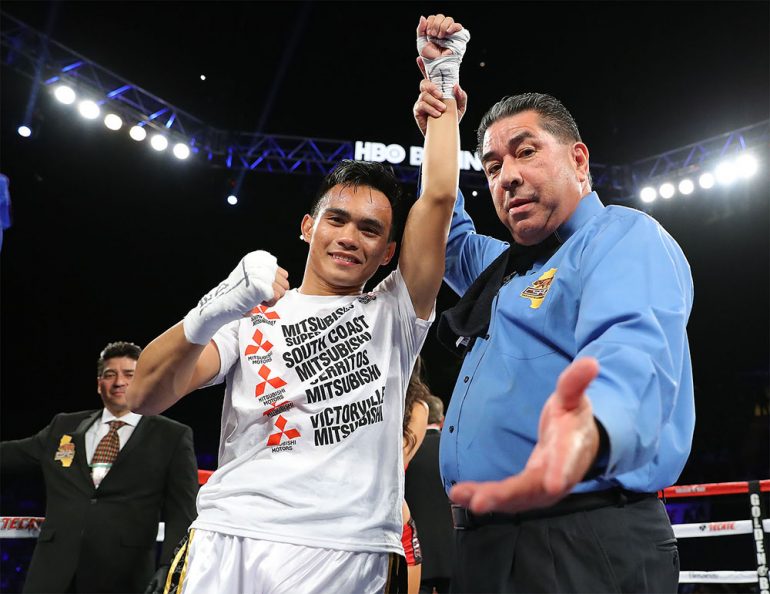 How far off is Romero Duno from contending in the shark-infested waters of the lightweight division? Boxing observers will get a clearer notion of how much the Filipino prospect has progressed in his next match, when he faces the heavy-handed Gilberto Gonzalez on May 17.

The fight, which headlines a Golden Boy on ESPN card at Fantasy Springs Casino in Indio, Calif., will see him ascend to a scheduled ten-rounder following five straight bouts at six and eight rounds. While Duno is not yet rated in the top 15 of any of the four major sanctioning bodies, the 22-year-old from Tagum City, Philippines already feels he’s ready to mix it up with the top 135-pounders.

“I hope they will give me a championship fight this year,” said Duno (16-1, 14 knockouts), who earned a promotional deal with Golden Boy after his March 2017 upset knockout of Christian “Chimpa” Gonzalez, and has won three more fights since.

Lightweight is about as deep as it gets in today’s boxing landscape: WBA titleholder Jorge Linares is set to face Vasyl Lomachenko on May 12, while Ray Beltran and Robert Easter Jr. hold the WBO and IBF belts, respectively. Mikey Garcia, who recently stepped up to defeat Sergei Lipinets for the IBF 140-pound belt, has announced he will return to 135 to defend his WBC belt. It’s the latter belt Duno says he wants a crack at eventually.

“If they give me that fight I’ll make sure to them that I fight to the death to get that belt,” said Duno, whose last fight was in January, when he knocked out the fragile Yardley Armenia Cruz in 61 seconds on the Linares-Mercito Gesta undercard.

The 30-year-old Gonzalez (26-4, 22 knockouts) of Mexico City may already be willing to give him that sort of test. He showed he could crack when he handed another Golden Boy prospect, Jeffrey Fontanez, his first ever defeat, and, in his most recent bout last April, he dropped Gesta before losing a unanimous decision.

“He’s a veteran, he’s powerful and he has good skill; that’s why I’m sure that he’s a dangerous opponent,” said Duno.

“Duno can’t take him for granted,” said Duno’s trainer Rodel Mayol. “So we will train and do every possible technique that we can use in order to win this fight and go to the top on his division. His weight class is very tough; there are a lot of good fighters, very hard competition in his division.”

Duno, who is handled in the Philippines by Sanman Promotions, had begun his preparations in General Santos City before moving camp to the Wild Card Gym in Los Angeles four weeks ago.

“I think this is a perfect step fight for Duno. Gonzalez is a tough veteran boxer. This is a great test to see if Duno belongs with the elite boxers,” adds Sanman COO Dexter Tan.

Also slated for the card is another lightweight prospect as Oscar Duarte (13-0, 9 KOs), of Parral, Mexico, against experienced Filipino Rey Perez (22-9, 6 KOs), who is coming off a one-sided decision win over “Chimpa” Gonzalez in February.