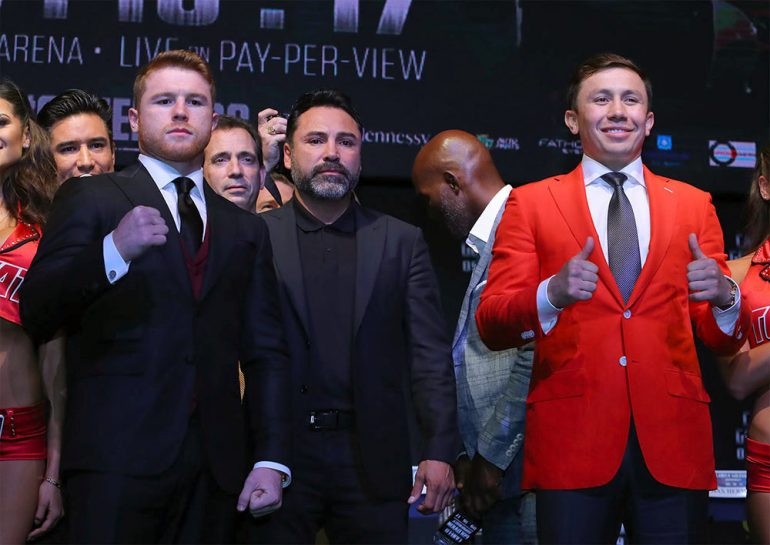 Though often in the background, Tom Loeffler (between Canelo and Oscar De La Hoya) was a powerful force behind moving Gennady Golovkin (right) into position for the biggest fight of his career. (Photo by Tom Hogan - Hoganphotos/Golden Boy Promotions)
17
Apr
by Mike Coppinger

Golovkin looked tired. Tired of all the uncertainty surrounding his next fight. Tired of fielding all the questions about Canelo Alvarez and the Mexican’s failed drug test for clenbuterol that scrapped the rematch.

So you can excuse Golovkin if he wasn’t his usual, cheery self on Friday at The Palm. You know, the affable guy with a quick one-liner. He still doesn’t know if he’s fighting on May 5. No one knows. All he knows is that he won’t be fighting Canelo on that date in Las Vegas.

Alvarez withdrew from the fight on April 3 after it was learned he wouldn’t be cleared by the Nevada State Athletic Commission. He remains temporarily suspended after clenbuterol was found in his system, even though he claims it was a result of tainted meat consumed in Mexico. He’ll find out the full length of the ban Wednesday when the commission meets in Las Vegas.

The Nevada rules and regulation calls for a minimum one-year suspension for a first-time doping offense. However, they also allow for that ban to be cut in half if the athlete cooperates with the investigation, something Canelo has pledged to do.

If the RING middleweight champion is suspended six months (retroactive to his first positive test for the banned substance on February 17), and many industry sources believe that will be the case, Alvarez will be clear to square off with GGG on September 15, almost one year to the day after their first meeting.

While Alvarez and Golden Boy Promotions prepare for the hearing, Golovkin and his promoter, Tom Loeffler, wait with keen interest.

“My training camp is hard every day. I want to fight,” said Golovkin, who turned 36 last week. “I ask Tom every day, ‘Please, I just want to fight. Give me fight. Unbelievable. Just crazy situation for boxing.”

Loeffler reiterated Friday that they plan to reschedule the rematch with Alvarez should he be available to fight in September. The Santa Monica, California-based promoter also wants to keep his fighter busy, a calling card of Golovkin’s meteoric rise from unknown commodity to a man capable of selling out arenas on both coasts.

Loeffler moved to close a deal with Don King for his fighter, junior middleweight contender Vanes Martirosyan, to challenge Golovkin for his three titles on May 5 at StubHub Center in Carson, California.

News moved quickly of the accelerated talks between Loeffler and King, and it was eventually believed the HBO-televised bout would be announced at the Friday news conference.

There was a hold-up, of course. There always is in boxing. When the Alvarez fight was canceled, Lou DiBella and adviser Keith Connolly acted quickly to urge the IBF to enforce a fight between the organization’s No. 1 contender, Sergey Derevyanchenko, and Golovkin, who holds the 160-pound title.

Golovkin also holds the WBC and WBA middleweight straps, and there’s a rotation system in place to ensure all three organizations see their mandatory obligations fulfilled with unified champions. The IBF is up next, and it sent a letter on Tuesday informing Golovkin’s team that it isn’t going to sanction a fight against Martirosyan.

The Armenian last competed in May 2016 when he challenged Erislandy Lara for his junior middleweight title. Martirosyan, 31, isn’t a middleweight, he’s coming off a long layoff and his last notable victory came in September 2015 when he topped former titleholder Ishe Smith.

With Golovkin at risk of being stripped by the IBF if he goes forward with the Martirosyan bout, Loeffler has engaged in talks with DiBella, Derevyanchenko’s promoter, to find a solution. DiBella and Connolly want their client to fight for the title, and they would rather it come against GGG.

Loeffler, though, repeatedly stated Friday that Golovkin would not fight Derevyanchnko next, and it’s no surprise. The undefeated Olympian from Ukraine would be the underdog, but he would represent a legitimate threat to topple GGG.

“When you have a unified champion, everything has to come together,” Loeffler said. “[Golovkin] has his responsibilities holding so many titles, but he has always lived up to them. We’ve never been in this unique situation before. Everything is on a very condensed schedule.

“We acknowledge the situation, but at the same time it would be a shame to have a fight such as Derevyanchenko promoted on a three-week basis. But we have to follow the rules of the IBF as well as the WBC and WBA, and that’s what we intend to do.”

Loeffler told THE RING on Tuesday afternoon that there was “no decision yet” on when Golovkin will fight next and against whom.

For Golovkin to fight someone like Derevyanchenko on short notice would threaten the massive payday a return encounter with Alvarez brings (the first bout is the third-highest grossing boxing event of all time). And that brings us to Wednesday’s hearing before the commission.

If Alvarez receives the six-month ban, Loeffler is likely to move forward with the May 5 fight against Martirosyan. Golovkin is then able to stay busy without ostensibly endangering the Alvarez rematch (injuries notwithstanding).

However, if Alvarez receives a one-year suspension, then all bets are off. At that juncture, Loeffler could still move ahead with a GGG-Martirosyan bout and also work out a deal with the Derevyanchenko side to ensure that the fight happens afterward, ensuring Golovkin keeps his IBF title and Derevyanchenko receives his opportunity, too.

“I have earned my way to a title shot; I am ready and willing to fight Golovkin next,” Derevyanchenko told THE RING. “He used to say that he would fight anybody at any time. I don’t understand why he’s avoiding me.”

Said Connolly: “Sergey has fought his way into the mandatory position; he has no intention of taking a step-aside fight. We want to fight Golovkin next. If he thinks Sergey is too risky of a fight then I can respect that, but then he must give up the IBF belt if he wants to handpick his next opponent. Sergey has his rights to the fight and has instructed me to legally protect those rights.”

So while Alvarez waits to find out his fate, Golovkin, Martirosyan and Derevyanchenko hang in the balance.

Golovkin was right when he called this a “crazy situation,” but soon enough, there will be a resolution. With Cinco de Mayo just three weeks away, time is running out.