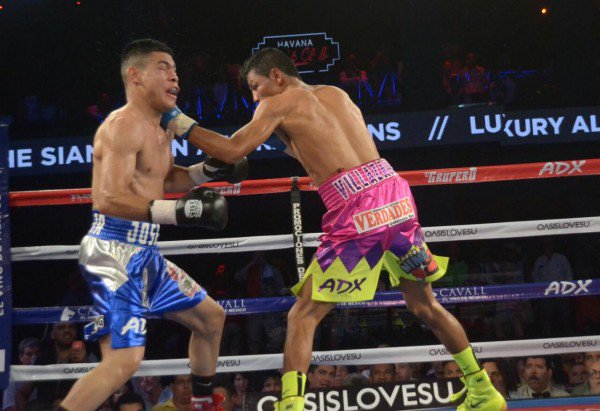 Marcos Villasana Jr. is making a name for himself in the lightweight division.

The 26-year-old boxer-puncher stopped fringe contender Jose Felix in the ninth round Saturday, at the Arena Oasis in Cancun, Quintana Roo, Mexico. The bout was scheduled for 12.

Villasana, whose father Marcos Villasana Sr. held the WBC featherweight title during the early 1990s, put Felix on the defensive early. That aggression was rewarded when he scored a knockdown in Round 4 with a quick flurry of punches.

Felix (36-3-1, 28 knockouts), who resides in the boxing hotbed of Los Mochis, Sinaloa, recovered but was forced to fight off the ropes. He sought counterpunching opportunities but Villasana dished out more and more punishment as the bout progressed.

The end came in Round 9 when Villasana staggered Felix into a corner with a left hook followed by a right uppercut. Sensing the moment, Villasana unleashed a barrage of punches that prompted referee Frank Gentile to step in and stop the fight.

Villasana, who resides in Acapulco, Guerrero, improves to 22-6, 13 KOs and has won his last seven bouts.

In junior welterweight action, Francisco Rojo stopped Galvis Guerra of Colombia at the end of the eighth round of a scheduled 10.

Rojo (22-3, 15 KOs) broke his opponent down gradually, mixing combinations to the head and body of Guerra who remained on his stool.

The Mexico City resident has won nine of his last 10 bouts, with a split decision loss to lightweight contender Ryan Martin on Sept. 16 the only blemish on his record during that stretch.

In light heavyweight action, Alejandra Jimenez (10-0-1, 8 KOs) and Irais Hernandez (2-1-1, 2 KOs) fought to an eight-round majority draw. One judge scored the bout 77-75 for Jimenez, who holds the WBC female heavyweight title, while the other two judges scored the bout 76-76.