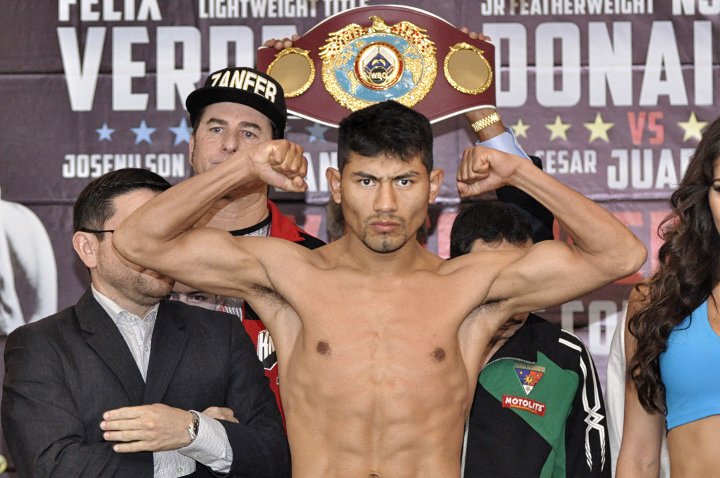 Mexican featherweight Cesar Juarez had to dig deep against Wilner Soto to secure a ninth-round knockout at the Domo Sindicato de Trabajadores IMSS in Mexico City on Saturday. The bout was scheduled for 10.

Juarez (22-6, 17 knockouts) utilized his awkward, aggressive style to walk his opponent down. Soto, from Columbia, gamely tried to hold his ground and exchange with the former junior featherweight title challenger and he did have some success.

However, despite his punch output dropping in the middle rounds, the 26-year-old Juarez, who resides in the Mexico City area, was always coming forward.

It was a close contest, but Juarez fed off the partisan crowd and found himself a second wind. Suddenly, a hard right hand dropped Soto (20-4, 11 KOs) face-first to the canvas, prompting referee Jose Medel to immediately stop the fight at 46 seconds.

“We’ll see what he will decide to do after the fight,” manager Sean Gibbons told RingTV.com before the fight. “He could easily decide to go down and look to fight for a world title at 122 pounds and settle unfinished business with Isaac Dogboe.”

Juarez traveled to Accra, Ghana, Dogboe’s hometown, and was stopped in the fifth round on Jan. 6. Juarez maintains that referee Tony Weeks stopped the bout too soon and is looking for a rematch.

Juarez returned to the ring on Mar. 2 in Culiacan, Sinaloa, Mexico, stopping overmatched Carlos Espinoza in the opening round.

In the main event between two junior flyweights who reside in the Mexico City area, Jessica Nery Plata (22-2, 3 KOs) won a hard-fought 10-round split decision over Silvia Torres (18-1-1, 6 KOs).