Manny Pacquiao denies decision on Freddie Roach has been made 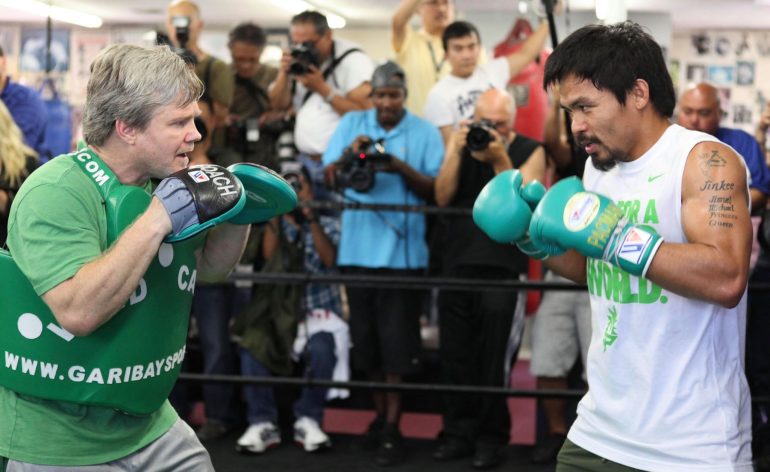 Announcements of their split have been greatly over-exaggerated. Or are at least premature.

Just days after a Manny Pacquiao associate released a statement announcing that assistant trainers Buboy Fernandez and Nonoy Neri would train him for his upcoming fight against Lucas Matthysse, Pacquiao issued a statement on his Facebook page denying that any decision had been made regarding his future with Freddie Roach.

“Contrary to statements which I personally did not make that are circulating in the media, I have not made my final decision who will be my head trainer for my July 14 fight (July 15 in Malaysia) with Matthysse. My advisor Mike Koncz has been in contact with Freddie’s people to keep them informed,” wrote Pacquiao on Sunday.

“I will make a final decision within the week. When that decision is made, Freddie will be the first one to be informed and then I will advise the media.”

Roach, who has trained Pacquiao since his 2001 upset KO of Lehlohonolo Ledwaba to win the IBF junior featherweight title, had issued his own statement shortly after the initial release, stating that he was “hurt” by not being personally informed.

“I would be lying if I [said] I wasn’t hurt that he didn’t contact me personally about his decision,” Roach said. “But the great times we enjoyed together far outweigh that.”

Pacquiao and Roach have been the most celebrated boxing tandem this century, with Pacquiao being named Fighter of the Decade by the Boxing Writers Association of America (BWAA) for the 2000s, while the BWAA also awarded Roach Trainer of the Year seven times.

The 38-year-old Pacquiao (59-7-2, 38 knockouts) hasn’t fought since last July when he suffered a shock loss to Jeff Horn in Australia.

Their relationship has been icy afterwards, with Roach saying a week after the fight that he hadn’t yet been paid, and later telling the LA Times in February that he had tried calling Pacquiao five times since then but hadn’t heard back.