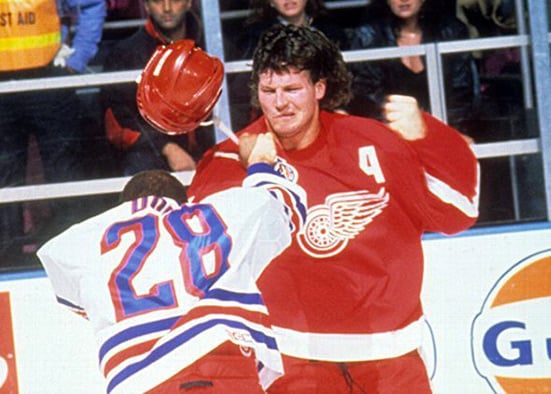 Legendary hockey enforcer Bob Probert got into his share of heated scraps on ice.
15
Apr
by Thomas Hauser

Rodney Dangerfield once told a stand-up comedy audience, “I went to a fight the other night and a hockey game broke out.”

Unlike other major team sports, hockey has a tradition of fistfighting. Some hockey fights arise spontaneously. Others are premeditated assault. At times, the fights are instigated at a coach’s instruction in an effort to halt the opposing team’s momentum and change the flow of a game. Other times, they’re in retaliation for an instance when a teammate has been physically abused. 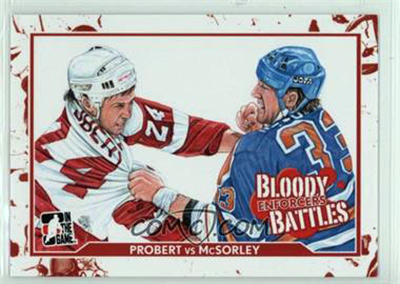 Most teams had (and still have) an enforcer, often a player with limited all-around skills whose job is intimidation and retaliation. Historically, Bob Probert, Dave Schultz, and Marty McSorley were among the league’s most imposing enforcers. In 1994, Probert and McSorley faced off against each other for a full two minutes while three officials looked passively on. Gordie Howe – the greatest player of his era – was sufficiently adept with his fists that most enforcers left him alone.

Fighting peaked in the 1970s and 1980s with season averages of at least one fight per game. The Philadelphia Flyers of the 1970s, who glamorized fighting en route to back-to-back Stanley Cup championships in 1974 and 1975, were known as the Broad Street Bullies.

“The goons were encouraged to create chaos,” Larry Merchant (who covered hockey as a columnist and sports editor) recalls. “It was open season on the opposing team’s stars which always seemed counterintuitive to me. I thought it marred a beautiful game. But that was the culture and that was how the league sold the game.”

Fighting is a marketing tool. Hockey fights are still featured on sports highlight telecasts. The standard refrain has always been, “This is hockey, not figure-skating.” There’s a ritual throwing down of gloves, and the crowd goes wild. No one gets up to visit the concession stand and buy a hot dog while a hockey fight is underway.

Traditionalists say that fighting is part of the culture of hockey the same way that hitting a batter on the opposing team with a fastball after your teammate has been hit by a pitch is part of the culture of baseball. But in truth, hockey takes the hostilities further. Hockey “enforcers” even have their own position. No matter what the roster says, they aren’t just defensemen or forwards. No other sport has a designated goon. A baseball team doesn’t bring in a relief pitcher for the express purpose of throwing at an opposing batter.

Steve Albert, who served as the voice of Showtime Boxing for two decades, knows hockey well. His first professional sports play-by-play experience came in the early 1970s when he was a student at Kent State. Whenever the Springfield Kings of the American Hockey League journeyed to Ohio to play the Cleveland Barons, Steve called the game for WMAS radio in Springfield. After graduating from Kent State, he worked for three years as a play-by-play commentator for the Cleveland Crusaders of the newly-formed World Hockey Association. Later, he added play-by-play duties for New York Islanders telecasts to his resume.

“I never liked the fighting,” Albert says. “I thought it was ridiculous. A few of the players know how to fight, but most of them fight as well as a boxer would play hockey. The just stand there, flailing away, trying to land anything. There’s no technique. When did you ever see a hockey player throw a jab?”

That said; when a hockey fight did break out, Albert often treated his audience to blow-by-blow commentary. 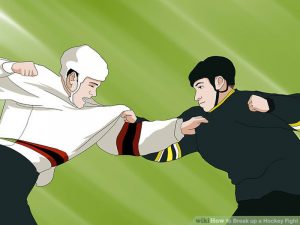 “I recall a WHA game that I called on the radio around 1974,” Steve reminisces. “It was between the Cleveland Crusaders and the Minnesota Fighting Saints at the Richfield Coliseum which, in case you’re wondering, was also home to the Ali-Wepner fight. A fight broke out on the ice. Then another. And another. And another. Four fights going on at the same time, and I was trying to describe them all on the air as they were happening.”

“But wait! There’s more,” Steve continues. “Suddenly, the coach of the Fighting Saints, Harry Neale, climbs up and over the glass behind the bench and gets into a slugfest with some Cleveland fans. So now I’m calling five fights at the same time. Then I look over to my right and see the Minnesota announcers embroiled in a fight with fans in the stands while they’re on the air.”

In recent decades, fighting has been all but eliminated from international hockey. Meanwhile, the National Hockey League has made an effort to cut down on fights although not do away with them entirely.

The NHL Rulebook now has more provisions governing the conduct of fights than many state athletic commissions. Fighting has long been a “major” infraction calling for a five-minutes banishment to the penalty box. And the league has instituted several additional rules to curtail fighting.

The “third-man-in rule” calls for the ejection of the first player who joins a fight that’s already in progress. The first player from each team who leaves the bench to join a fight in progress is also automatically ejected from the game. And the player who starts a given fight receives an additional two-minute penalty.

The NHL rulebook also has separate provisions relating to the “instigator” of and “aggressor” in each fight. Head-butting, kicking, and kneeing an opponent are covered in categories separate and apart from “fighting.”

Fights now occur on average in only one out of every three NHL games. But clearly, the league doesn’t want to eliminate fights altogether. If it did, it could do what the NBA does. In the NBA, a player who throws a punch is ejected from the game. In hockey, he gets a five-minute rest in the penalty box.

Thus, when the New York Rangers acquired Cody McLeod earlier this year, much was made of the fact that McLeod had led the league in fights in two of the past three seasons. Rangers coach Alain Vigneault explained, “He brings a dimension that’s different than what we have.” And an article about McLeod in the New York Post was headlined, “Meet the Rangers’ New Enforcer.”

But as Steve Albert would say, “Wait! There’s more.” 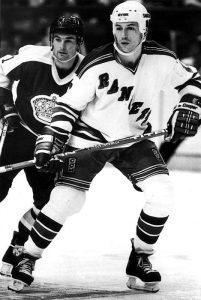 Former NY Ranger Steve Patrick was trained by Teddy Atlas in the mid-’80s.

In the mid-1980s, Teddy Atlas was called into service to train New York Rangers right wing Steve Patrick in the art of fighting. Patrick was 6-feet-4-inches tall, weighed 205 pounds, and wasn’t “engaging” as often as the Rangers coaching staff would have liked.

“Back then, you had a couple of players with amateur boxing experience,” Teddy recalls. “[New York Rangers enforcer] Nick Fotiu had been in some amateur fights which gave him a significant edge. With Steve Patrick, I explained to him, ‘Basically, you’re dealing with a four-foot-square area where the fight is going to take place. The other guy will be right in front of you, so you’re talking about inside fighting, not throwing wild caveman punches. Use the other guy’s mistakes against him. Most hockey players open themselves up before they throw, and that will give you opportunities. Take your time. Uppercuts will be your best weapon.”

Paulie Malignaggi, another keen observer of the boxing scene, has his own take on the subject.

“When you’re talking about a fight in hockey,” Malignaggi notes, “obviously, it’s a different technique. The fight might start with a punch. But then it becomes like judo, grappling, or street-fighting. You try to use the other guy’s jersey to immobilize him by pulling it up over his arms so he can’t punch or you pull it over his head so he can’t see. Think of it as a boxer fighting with his robe on.”

“As for the punching,” Paulie continues, “a punch is a punch. And the guy who gets off first has an advantage. But hockey players can’t really plant their feet to punch. Their feet aren’t stable because they’re gliding on ice, so it’s all upper-body with very little leverage. The only thing that works in favor of the guy punching is that, from what I’ve seen, there’s very little head movement in hockey fights.”

Or as promoter Lou DiBella recently observed, “As far as technique is concerned, hockey players who are fighting make Butterbean look like Sugar Ray Robinson.”

A video review of ESPN’s December 9, 2017, Vasyl Lomachenko vs. Guillermo Rigondeaux telecast reveals that Anatoly Lomachenko (Vasyl’s father and chief second) wore either an earbud or a hearing aid in the corner during the fight. Both are legal. But should an earbud be?

Boxers, like all athletes, are always looking for an edge. The classic example of this dates to Muhammad Ali’s 1977 fight against Earnie Shavers at Madison Square Garden.

NBC, which televised the bout, was allowed by the New York State Athletic Commission to see and tell viewers at home the judges’ scores after each round. Angelo Dundee, who trained Ali, arranged for a Baltimore matchmaker named Eddie Hrica to watch the broadcast on television in the arena and relay the scoring to Dundee via hand signals as it was announced. After twelve rounds, Angelo knew that, under the round system in effect in New York, Ali was leading 8-to-4 on two judges’ cards and 8-3-1 on the third. That dictated his strategy for the final three rounds.

Suppose a TV telecast picks up a fighter telling his trainer, “I think my hand is broken” or “my ribs hurt.”

Earbuds shouldn’t be allowed in the corner during fights. The trainers aren’t listening to Frank Sinatra.