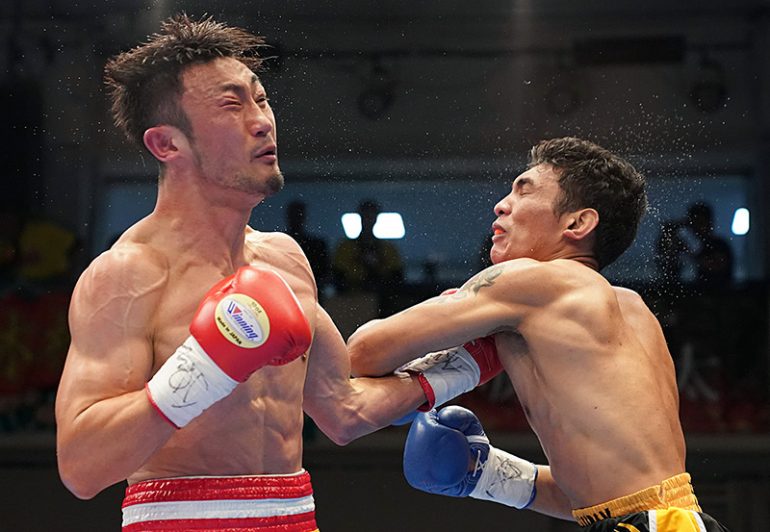 What happens when two fighters trade left hooks with their right hands low? In rare instances, you’ll get a double knockdown, just as was the case Thursday at Korakuen Hall in Tokyo, Japan.

Hometown fighter Keita Obara and Filipino visitor Alvin Lagumbay both cranked back with hard lefts, and each man sent the other to the canvas. The referee administered a count for both, but after Lagumbay made it back to his feet relatively unflustered, the ref turned his attention to Obara, who was having a much harder time recovering. Obara made it back upright but was out on his feet and the fight was waived off at the 2:36 of the second round.

It was a minor upset considering that Obara (19-3-1, 17 knockouts), who challenged Eduard Troyanovsky unsuccessfully for the IBF junior welterweight title in 2016, was rated no. 6 by the WBO and no. 8 by the IBF at 147 pounds. The 22-year-old Lagumbay (10-2, 9 KOs) of San Fernando, Bukidnon, Philippines was stepping up several weight classes, having weighed just 133.5 pounds when he was stopped in four rounds by Kazuki Saito just last November. 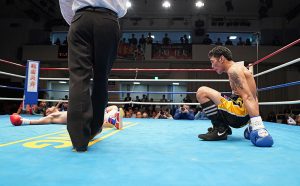 Lagumbay struggles to his feet while Obara lay flat on the canvas following their double knockdown. Photo / Naoki Fukuda

“I didn’t expect it…it was just like a movie,” said Lagumbay’s manager Art Monis, who worked his corner alongside Lagumbay’s trainer, former IBF junior flyweight titleholder Tacy Macalos. Monis says there is an option for a rematch in the contract.

The chaotic finish joins the brief list of memorable double knockdowns, including Sechew Powell-Cornelius Bundrage I (2005) and Thomas Hearns-Jay Snyder (1998).

Lagumbay wasn’t the only Filipino to get a win on the card, which was promoted by Reason Promotions.

Richard Pumicpic (21-8-2, 6 KOs) extended his winning streak over Japanese fighters to two-straight, winning a unanimous decision over Yoshimitsu Kimura (9-1, 4 KOs) to retain the WBO Asia Pacific featherweight belt. The scores were 116-112 on two cards and 115-113 on the third.

“It was pretty hard for me because he has a strong punch, but I know that he was hurt more by my punch,” Pumicpic of Sindangan, Zamboanga del Norte, Philippines told RingTV in Tagalog. “I thought that I would be able to knock him out in the ninth or tenth round, but he still survived.”

Pumicpic, 27, pulled off an upset in his previous fight in September, a unanimous decision over former title challenger Hisashi Amagasa, and performed nobly in a 2016 decision loss to Cesar Juarez, nearly finishing Juarez in the tenth round. He had been managed for years by Anson Tiu Co but is now handled by Japanese manager Mr. Yamashita.