Minnesotan Jamal James is a tall order for the welterweight division 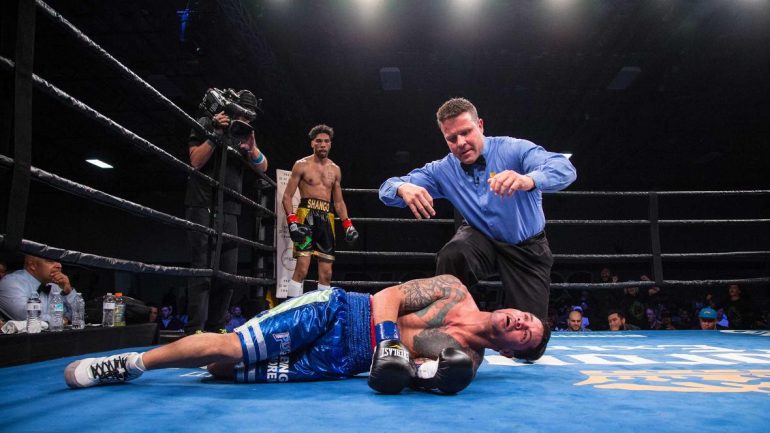 Like the old-time barnstormers of boxing, Jamal James has criss-crossed the country in recent years to find the action. His fight this Friday, at the Minneapolis Armory, against Abel Ramos, will be his first in his hometown since 2013, a homecoming which will see him headline a “PBC on FS1” card (9 p.m. ET/6 p.m. PT). It marks his return to a city he takes great pride in representing, and the venue holds a rich boxing history tucked away under decades of time passed.

It’s where the Minneapolis Lakers played many of their home games before the team moved to Los Angeles, and where Prince shot the music video for his hit song “1999.” It was also a happening venue for boxing during the 1940s, hosting fights for Hall-of-Famers like Fritzie Zivic and Charley Burley, the latter of whom Archie Moore called “the best fighter I ever saw.”

An undefeated Sugar Ray Robinson also fought there once in 1942, knocking out a debuting Dick Banner in two rounds, but the venue hasn’t had a pro fight since 1973 and it’s James’ pleasure to reintroduce the sport at the renovated facility.

“They haven’t had professional boxing in there for like 45 years, so for me to be the first person to main event, to bring that back there, is a big honor to me and I’m really excited,” said James (22-1, 10 knockouts). “Sugar Ray Robinson fought in that place, along with other big name fighters that I studied and watched. It feels good to be able to compete on that type of stage.”

James vs. Ramos is a 10-round fight that could provide James with the sort of national exposure which could boost his chances of securing a title shot against one of the top welterweights. There is also danger in facing Ramos, a 26-year-old from Casa Grande, Arizona, with an 18-2-2 (13 KOs) record, with little to lose and far fewer obligations to a home crowd. Ramos’ only two defeats have come against top 140-pound talents Regis Prograis and Ivan Baranchyk, the latter of whom he dropped in the same round he himself had touched the canvas.

“He’s not coming to lay down; a guy like that, he doesn’t have as good of a paper record as I do but that can be due to anything,” said the 29-year-old James, who, at 6-foot-2, is several inches taller than the top 147-pounders. “And if you overlook guys like Abel Ramos, then you end up looking a fool and I don’t want that to happen, especially fighting in my backyard.”

James first stepped into a boxing gym at age 4. His mother wanted him to be around positive male role models and boxing was a bit of a family tradition. His stepfather Sankara Frazier first put gloves on him at age 5 and still trains him to this day. He recalls a lanky, skinny kid who found his rhythm after years of practice.

“He was gangly. We had to work with him just like anybody else, to get control over his skills, to put the right muscle tone on his body and everything else which goes along with that,” remembers Frazier. “But the aggressiveness of him, when he’s boxing, he had that. You hit him and he’s gonna fight. That’s the way you can tell the ones that really like it from the ones who are doing it just to do it.”

James had approximately 200 amateur fights, Frazier estimates, and fought top amateurs like Danny Garcia and Terence Crawford before turning pro in 2010. His career went smooth at first but fights became scarce, after a busy start, and he didn’t fight for 13 months between 2011 and 2012. Business finally picked up in 2014, when his name was brought to the attention of Premier Boxing Champions by Todd Harlib, his cutman who passed in 2016.

He got a tryout fight against Cameron Krael in Chicago, stopping him in the eighth round. A year later, he was in his first significant test, getting off the canvas to decision Juan Carlos Abreu. He followed those wins with decisions over Javier Molina and Wale Omotoso, rising from the floor against Omotoso to take a split verdict.

A month later, James was back in the ring on short notice against Cuban Olympic bronze medalist Yordenis Ugas. The bout ended with his lone defeat, a unanimous decision loss.

“Truth be told, I was feeling myself a little more than I should have been,” said James. “It wasn’t that I wasn’t in shape because I still went a good 10 rounds but my reflexes were just off; my timing was off, when I got under the lights and he was just the better man that night. That was just a great lesson for me, to know you better take time and have your mind really focused before you just jump into something.”

Wearing purple and sequined trunks, which looked like something Prince would have worn if he boxed Charlie Murphy instead of schooled him in basketball, James returned after nearly a year off against former title challenger JoJo Dan. James used his range and combination punching to good effect early on but found difficulty with Dan’s physical strength in the middle rounds en route to the unanimous decision win.

James was far more in control in his most recent fight, a third round knockout of former title challenger Diego Chaves. The finish came on a left hook to the ribs, underlining his willingness to work the body despite being much taller than most of his foes.

His height, about five inches taller than the tallest current welterweight titleholders Errol Spence Jr. and Jeff Horn, gives him a built-in attribute, which makes fighting him a unique task. But height is only might if you use it right, James says.

“Being tall creates obstacles but you also have to have a certain strength too because, tall and skinny, if you’re not in shape and the rounds progress, you start looking like a string bean,” said James, a respectable puncher, whose jab and right hand are complemented by an adequate left hook often thrown on the move. “I’m one of the tallest guys in my weight class and it creates a lot of obstacles. It’s a God-given gift and you just use it to your advantage.

Despite his recent fights being out of town, James has built his following through interacting with customers at Carley Coffee, an independently-owned shop he manages. It’s a change of scenery, which he says keeps him from being burned out by staying in the gym constantly, and a business he knows well, having worked in coffee shops, since his stepmother gave him a job at one at age 16.

“You’re basically a daytime bartender but it’s not as hectic as working at a bar,” said James. “You run into a lot of people because mostly everybody drinks coffee. When they find out that I box, I’m able to build relationships and get more fans.” When he’s not brewing coffee or working out at the Circle of Discipline boxing gym, he’s laying down bars or writing rap lyrics at the production studio his father owns.

For now, James’ priority is on his fighting career. He is ranked in the Top 15 by both the WBA (No. 4) and the WBC (No. 11), and says he’d like to put himself in line to challenge for the WBA “regular” belt (a categorization unrecognized by THE RING Magazine) currently held by Lucas Matthysse, who is reported to fight Manny Pacquiao on July 15 in Malaysia.

“Being realistic, boxing careers aren’t the longest ones, so I want to make the best of it that I can. Any title that I get an opportunity for, I’d love to take the challenge,” said James.

“He’s right about there. We can challenge pretty much any time, it’d be up to what the management says more than us being ready,” said Frazier.

James also hopes to open the fans’ eyes to the level of talent in the Gopher State and is excited about his gym mates Ve Shawn Owens and Celso Ramirez getting ring time on the undercard.

“My whole vision is to take it as far as I can and open the doors and let them come through, get a business going, get some property and fade out once I feel that I’m done with it,” said James, “but I’m gonna make the most of it while I’m still here.”