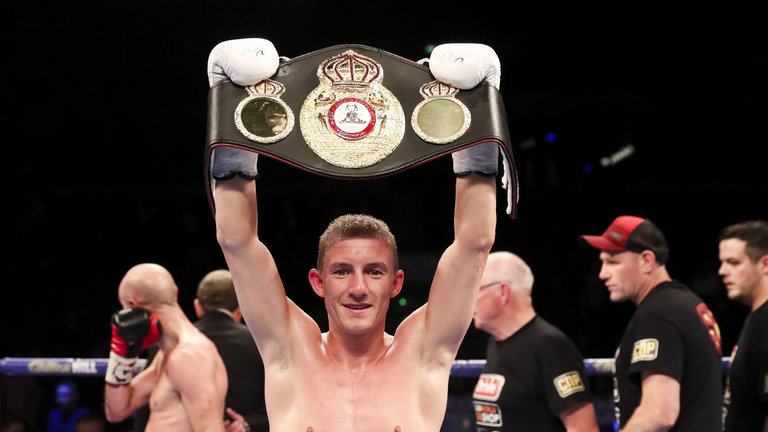 Former IBF bantamweight titleholder Paul Butler gets the chance to retain his old belt when he tackles undefeated Emmanuel Rodriguez for the vacant version at the O2 Arena in London on May 5.

Butler has won nine consecutive fights, six by knockout, since his only professional defeat – a stoppage loss at the hands of Zolani Tete in 2015. The Englishman has regrouped well, however, and now trains under the guidance of THE RING Trainer of the Year 2015, Joe Gallagher.

“I’m very excited for this,” said Butler. “It’s the reason we came over to (promoter) Eddie (Hearn) in the first place. I knew he would deliver the big fights for me. We’re just four weeks away. It’s a big test, but I’m confident.

“It’s a tougher test the last time I won the title (from Stuart Hall), but I’m up for the challenge. I’ve improved myself. (Rodriguez) is touted to be this next big superstar, but how many of them come over here and get turned on their heads?

“I never used to look at my opponents, but since I’ve linked up with Joe, he’s always sending me little clips. He looks a good kid; he likes to work at mid-range, but in truth I don’t want to say too much about what he does and doesn’t do well.

“I don’t care how big and tough he is – we both have two arms, two legs. He’s from Puerto Rico and I’m from Ellesmere Port so let’s get it on. I can see this being a very good fight, but I’ll come out being the two-time bantamweight champion.”

The 25-year-old Rodriguez (17-0, 12 KOs) is highly-rated. This will be his first overseas assignment as a professional and Butler represents a significant step up in class.

This 118-pound clash will serve as chief support to the heavyweight rematch between Tony Bellew and David Haye.