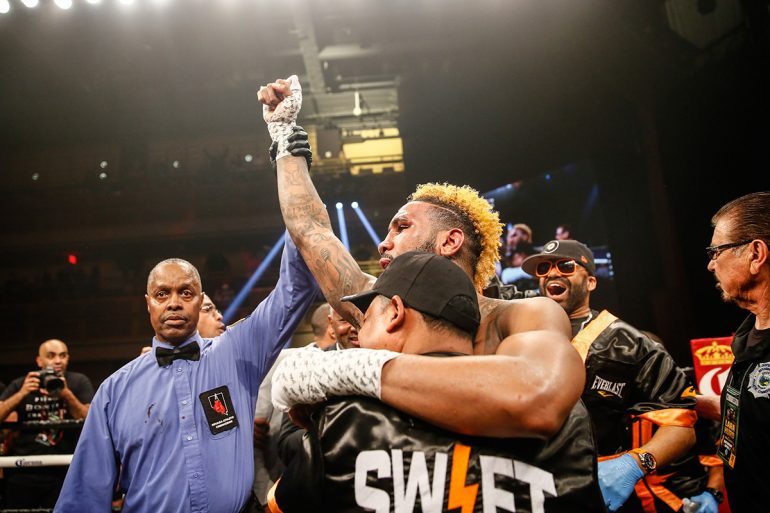 Jarrett Hurd raised eyebrows when he called out fellow 154-pound titleholder Erislandy Lara after making the first defense of his IBF belt with a 10th-round stoppage of Austin Trout last October.

Hurd, who had been outboxed by Trout and Tony Harrison over the first half of those back-to-back bouts, had a limited amateur career and was obviously still learning on the job. Against Lara, he would face the most ring savvy boxer of the junior middleweight division, the longest-reigning beltholder, and a former world amateur champion who was also captain of the Cuba’s vaunted boxing team. 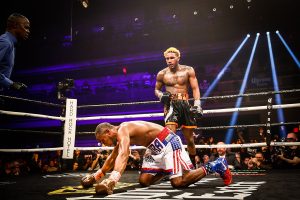 Hurd clinched the victory against Lara with a 12-round knockdown. Photo by Stephanie Trapp-SHOWTIME

Was Hurd ready to step up to Lara’s class? Yes, he was, but his victory – which took place on Saturday in Las Vegas – did not come easy. In a brilliant and dramatic clash of styles, the 27-year-old pressure fighter outworked the defiant 34-year-old southpaw and scored a final-round knockdown to earn a razor-thin split decision, and Lara’s WBA title.

Fans, whether they scored the fight for Hurd or Lara, were unanimous in hailing the Showtime-televised thriller as a Fight of the Year candidate, and members of THE RING’s Ratings Panel were equally impressed.

The majority of the Panel voted to advance Hurd (22-0, 15 knockouts) from No. 3 to No. 1 in the junior middleweight rankings. Lara (25-3-2, 14 KOs), the previous No. 1 who proved to have as much mettle as he does skill against Hurd, didn’t drop very far, only to No. 3, just behind unbeaten WBC titleholder Jermell Charlo.

There is talk of Charlo (30-0, 15 KOs) facing Hurd in a three-title unification bout. If the fight happens, THE RING’s vacant 154-pound title will be on the line.

Several other RING-rated fighters were in action in recent weeks, resulting in more division updates. 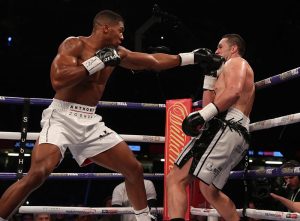 Heavyweight – No. 1-rated Anthony Joshua outpointed No. 3-rated Joseph Parker to add the New Zealander’s WBO belt to his IBF and WBA titles. No. 4-rated Alexander Povetkin stopped unrated David Price in a wild shootout on the Joshua-Parker undercard. Parker and Povetkin switched places in the rankings.

Super middleweight – No. 4-rated Caleb Truax lost his IBF title to No. 7-rated James DeGale via split decision in their ugly, bloody rematch. DeGale, who did not appear to recapture his peak form in regaining the belt he lost to Truax in December, only advanced one spot. Truax dropped to No. 8.

Junior middleweight – No. 10-rated Julian Williams outworked the formidable and game, but unrated Nathaniel Gallimore over 12 rounds in an IBF eliminator. Williams advanced to No. 9.

Flyweight – Former strawweight and junior flyweight titleholder Kosei Tanaka stopped previously unbeaten prospect Ronnie Baldonado in nine rounds in his anticipated 112-pound debut. The 22-year-old phenom, who was the No. 1-rated junior flyweight, enters at No. 7.