Floyd Mayweather wants Lomachenko-Davis. Or does he? 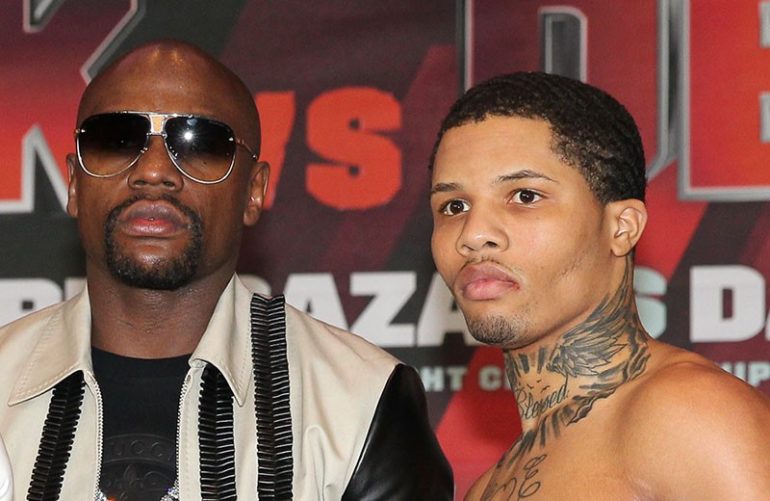 No, not his teasing of an Octagon entry. That tidbit drew scorn from the Twitterati, all of whom, I allege, will pony up and sit down to watch what happens if Mayweather tries his hands (and feet?) in the MMA realm.

I’m talking about Floyd’s news that he’d like to match his fighter, Gervonta Davis, against Vasyl Lomachenko, and that he’s already discussed the matter with Loma’s promoter, Top Rank.

If Davis gets past Jesus Cuellar April 21 at Barclays Center, Floyd said, let’s have a Davis versus Loma fight.

Yes, that tidbit grew some gasps and continued discussion. For one thing, last year Floyd had thrown a bucket of cold water on that pitch, telling media that his kid Davis had ample room to get better, and they’d be taking their time on building the Baltimore boxers’ resume. Davis was 22 then, 23 now … so what else has changed?

Well, we’ve heard chatter. Not hard to pick up on it being that Davis has taken to Twitter to critique this and that. A since deleted Tweet noted that he thinks he’s been promoted poorly of late. Coincidentally or no, soon after that, Floyd pitched publicly the Loma vs. Gervonta match.

The cynic in me, in a lot of us, thought that maybe the promoter was floating this concept more as a threat, than a promise. Like, keep yappin’ Gervonta, and I’ll show you mis-promotion!

But, in fact, Top Rank bossman Bob Arum confirmed to me that Floyd had talked to TR about a faceoff between the 19-0 junior lightweight and the 10-1 Ukrainian pugilist-specialist.

“Loma has a hard fight with Jorge Linares on May 12,” Arum said. “If all goes well for both guys it would make a good event later this year. Floyd did talk with Todd a few days ago about this.” (Todd is Todd Duboef, heir apparent and primary architect of most of the new age moves that TR has been doing the last five-plus years.)

So, maybe possible that Floyd was just floating this to eff with Gervonta?

And what about Team Loma? Would they be into this tango? Egis Klimas manages the Ukrainian pound-for-pound pound all-star. What about it, Egis? Gervonta versus Loma?

“It’s just talk,” Klimas told me. “They are using Lomachenko’s name to promote themselves.”

For the record, Loma is trying out lightweight in his next bout, unfolding at Madison Square Garden versus Linares, a 44-3 Venezuelan who holds THE RING and WBA 135-pound titles.

What are your thoughts, friends? Was this a Mayweather trial balloon, partially meant to puncture Gervonta’s ego? Or is Floyd now less inclined to take the ultra-measured track on the Davis career advancement pathway…because…. I’m not sure why. Talk to me!