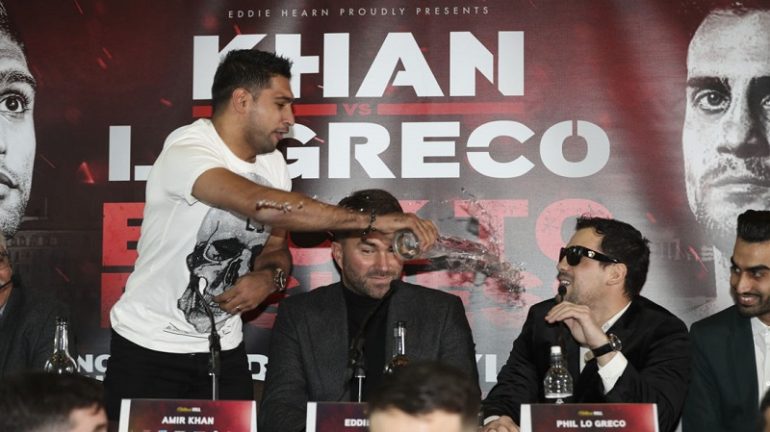 Amir Khan throws a glass of Water at Phil Lo Greco at a Matchroom Boxing press conference in Liverpool, announcing their fight at the Echo Arena, on April 21 2018. Photo credit: Mark Robinson
09
Apr
by Tom Gray

Amir Khan is no stranger to drama outside of boxing.

Now, the former unified junior welterweight titleholder has said that a personal attack by American Phil Lo Greco during the buildup to their April 21 bout at the Echo Arena in Liverpool, England, has fueled his fire in training camp.

“He got personal and he’s going to pay,” said Khan, who takes on Lo Greco at welterweight. “Talk about boxing, talk about me getting KOd or getting beat – but going into my personal life is disrespectful and that’s made me angry. I want to show him who’s boss and put it on him. He’s an idiot and he’s going to be put in his place on April 21.”

Khan (31-4, 19 knockouts) is back in England after training in San Francisco and claims to be ready for his first outing in almost two years. The last time fight fans saw the 2004 Olympic silver medalist in action, he was on the end of a crushing knockout loss to Canelo Alvarez.

“What (Lo Greco) said has only added more fuel to the fire,” said Khan. “I’ve felt great in camp and I know that I need to be at my sharpest as I’ve been out for a while. I know that he’s going to think he can take advantage of that and upset the odds – but that’s not happening.

“Welterweight is where I want to be winning world titles. The next two fights are going to be huge marquee names that make me a two-weight world champion. (Promoter) Eddie (Hearn) knows what I want and he’s got the plans down.”

Information courtesy of a press release by Matchroom Boxing.