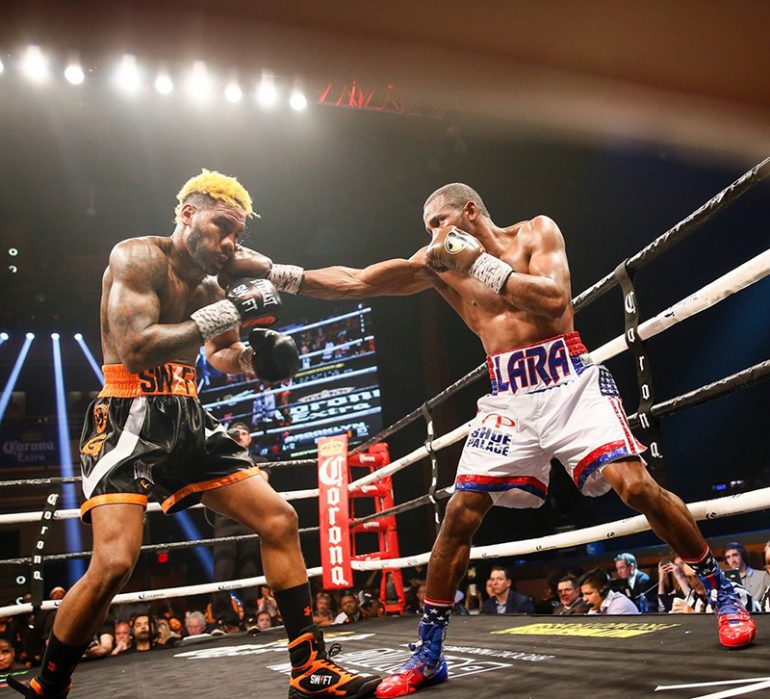 Hurd kept pressing and pressing, and finally, with about 15 ticks remaining in the fight, Hurd delivered the punch that won him the fight: a sharp, hammer-like left hook that planted Lara on the black ring canvas.

Lara collected himself, his right eye closed shut after absorbing countless punches from a far bigger man, and finished the fight, an excellent matchup that featured back-and-forth action from bell to bell on Saturday before a sold-out crowd of 2,579 at at Hard Rock Hotel & Casino.

In the end, the knockdown was the difference on the scorecards as Hurd pulled out a razor-thin split decision victory: 114-113 for Lara, overruled by two 114-113 tallies for Hurd, who unified junior middleweight titles and more importantly, placed himself directly on a star path.

“It was a tough one, but I went out there and did exactly what I said I was going to do – fight all 12 rounds and get the victory,” said Hurd, who added Lara’s WBA belt to the IBF title he already owned.

“I feel like I was in control the whole fight, applying the pressure. I don’t think it had anything to do with (Lara’s) age (34). I think it was me and the game plan we had to apply the pressure.”

That pressure was absolutely swarming. Round-after-round, second-after-second, Hurd churned his legs, cut off the ring, and bullied Lara into the ropes, all the while swinging with power shots that found their mark.

The strategy Hurd (22-0, 15 knockouts) employed was wise, and it was the one he promised to use months before the fight was even signed, when he was purely calling for a shot at THE RING’s No. 1 junior middleweight. Hurd watched Lara’s 2013 bout with Alfredo Angulo and saw the blueprint then.

Even though Angulo lost after his eye was closed shut, he was able to score two knockdowns of Lara and his pressure gave Lara fits.

So Hurd went to work, and used his superior size to break Lara down. Hurd must have known he wasn’t going to so much outbox Lara as outwork him. After all, Hurd’s amateur career was abbreviated and unmemorable, and Lara is one of the most accomplished fighter’s in the storied Cuban amateur system.

“Lara is the type of guy that always had trouble with pressure fighters,” said Hurd, who called for a fight with Jermell Charlo in the fall, one that’s bound to crown a new RING champion at 154 pounds. “I knew that my size and power if I was able to pressure him the way I did I would be successful.”

Lara (25-3-2, 14 KOs) is often panned for his cautious, safety-first style, but he started fast and actually pushed forward in Round 1 with plenty of overhand lefts that were delivered with precision.

When Lara lets his hands go, his offensive gifts are obvious: the way he sets up shots and his punch variety all impressed. He controlled the first two rounds, and when the fight was in the center of the ring, he flourished.

He’s been the top dog at 154 pounds for years, and he fought Canelo Alvarez on even terms in a 2014 defeat. And even if Hurd’s determination won the night, Lara won respect. He’s been criticized — dogged, even — by fans and media alike for his level of competition and the boring nature of his matchups since his pay-per-view bout with Canelo.

If there’s such a thing as a moral victory in sports, this was it.

“It was a great fight for the fans​,” Lara said. “I stood and fought a lot and it was fun. I thought I clearly won the fight. Once again a decision goes against me​,​ but ​h​ey, we just gotta do the rematch.”

Even as Hurd continued to pressure Lara, the longtime titleholder stood his ground and traded with the 27-year-old from Maryland. Lara landed some sharp shots, and did some great body work, but Hurd was never deterred.

Hurd’s heavy, clubbing shots thudded with each connect — all 217 of them — and he even mixed in a few lead rights, too.

It was apparent Lara couldn’t keep up this pace. Something had to give, even as he tried to hold Hurd off with powerful uppercuts on the inside. The punches never had an effect.

He was like a cyborg on a mission, and he was able to lure Lara into a myriad of brutal exchanges, and it was always Lara who emerged the worse for wear.

Finally, Hurd broke through with that punishing left hook in the closing seconds, the punch that won him the fight. Despite all his success, many of the rounds were tough to parse, and without the knockdown, Lara would have earned the decision.

Instead, it’s Hurd who’s destined for greater things, and he’s now the king of the junior middleweight division.