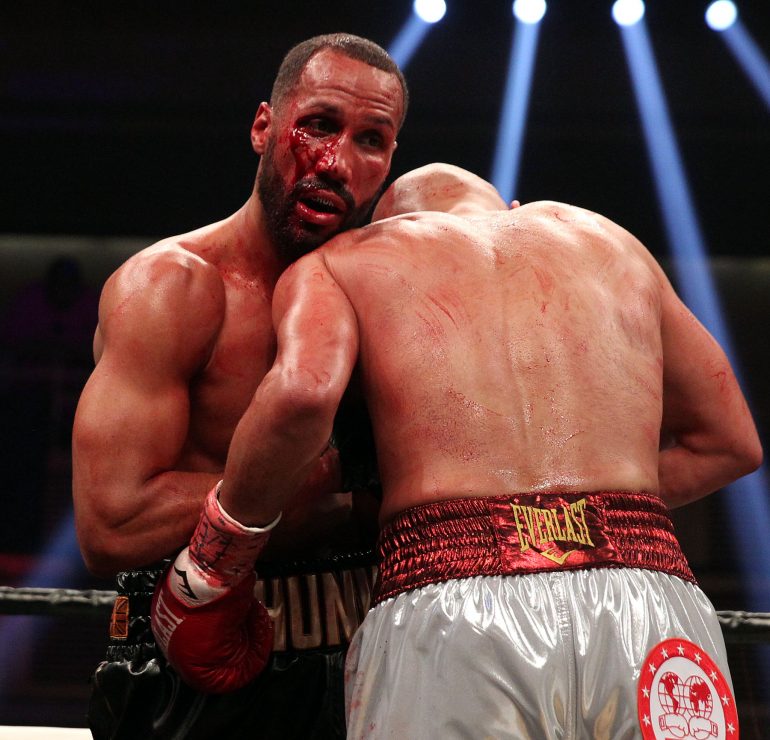 Truax-DeGale II was an ugly bloodbath.
07
Apr
by Mike Coppinger

LAS VEGAS — The red droplets sprayed across the black canvas and all over Caleb Truax’s back.

A long slice about the length of a pencil point spread across James DeGale’s right eyebrow, and the blood poured in buckets from the third round on.

DeGale was attempting to regain what he believed would soon again be his: the super middleweight title he lost to Caleb Truax four months ago in the most shocking upset of 2017.

The Olympic gold medalist promised he would retire if he was defeated in the rematch, but it won’t come to that. DeGale battled through the crimson mask he wore, eyesight limited, and eked out a unanimous decision victory over Truax on Saturday at Hard Rock Hotel & Casino.

“I want to be busy. I have a couple years left in this sport.”

The newly crowned 168-pound titleholder was referring to two questionable decisions by the veteran referee. First, Byrd ruled that the gash DeGale suffered in Round 3 was the result of a punch, even though replays showed it clearly arose from a headbutt.

Then in Round 10, Byrd deducted a precious point from DeGale for nudging Truax (29-4-2, 18 KOs) with his shoulder.

The two dubious calls weren’t enough to stop DeGale, even though the blood almost did. DeGale still didn’t resemble the fighter who was once approaching pound-for-pound status as he engaged in an ugly fight with the journeyman from Minnesota.

Perhaps it was the never-ending trickle of blood. Or perhaps DeGale’s shoulder still isn’t right following major reconstructive surgery in June. The 32-year-old blamed his impatience in rushing back from the injury for the upset defeat to Truax in December, coupled with a ho-hum training camp.

So if DeGale was looking to erase any doubts about how much he has left in the tank at 32, he didn’t accomplish that goal, even in victory.

They fought on the inside for the entirety of the bout, and their collided on numerous occasions as is often the case when a southpaw meets an orthodox fighter.

DeGale caught Truax twice in the opening rounds with butts to the mouth, but in Round 3, it was Truax’s bald head who busted DeGale face wide open.

There were some sharps punches landed in the matchup, but they were few and far between as they both jockeyed for position during the many clinches. When they weren’t grabbing each other, it was DeGale who was the cleaner, more impressive puncher as he capitalized on counter-punching opportunities presented by the hard-charging 34-year-old.