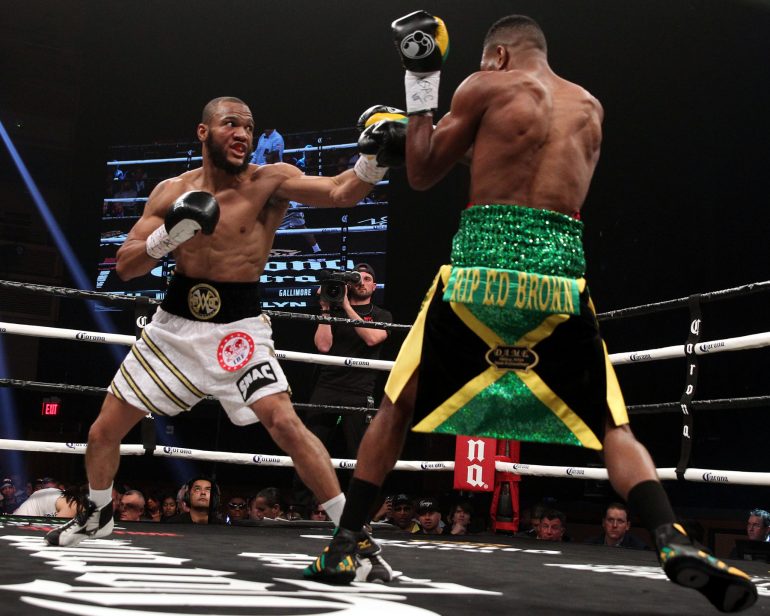 LAS VEGAS — In his quest to erase the Jermall Charlo knockout from the memory of fight fans, Julian “J-Rock” Williams turned back the trash-talking Nathaniel Gallimore to earn a 12-round majority decision in an IBF junior middleweight title eliminator.

Gallimore verbally badgered Williams for weeks leading up to the fight with promises to knock the former title challenger out. It was an interesting position for Williams, who portrayed the role of the bully before his fight with Charlo. Nevertheless, J-Rock refused to engage in a lengthy war of words with his opponent and decided to let his fists do the talking when the two squared off Saturday at the Hard Rock Hotel & Casino on Showtime Championship Boxing.

Judges Don Trella and John McKaie offset an awfully questionable even scorecard turned in by Patricia Morse Jarman to give Williams the decision with scores of 116-112, 117-110 and 114-114.

“He is a strong fighter, but I knew he was going to do what he did: start strong early. But I knew he wasn’t sh*t after six rounds,” said Williams. “The hits to the body was all in the game plan. You have to go to the body in a 12-round fight.

“I was watching a lot of Andre Ward when he fought Sakio Bika and Allan Green. He was getting in between their arms and they couldn’t do anything. He wore them down on the inside. I knew I would have to box him early and wear him down late to the body and I did a heck of a job.”

Williams (24-1-1 15 knockouts) established his jab in the early rounds and forced Gallimore (20-2-1 17 KOs) to close the distance considering he was ineffective from the outside. The fight took a turn at the end of the fourth when Gallimore finally bulled his way inside and let his hands go.

The result of the ambush briefly rattled Williams and forced him to fight off his back foot. The Jamaican’s tactics paid off in the middle rounds as the pressure and inside work caused damage on Williams, including some swelling under his left eye.

But the experience of “J-Rock” allowed him to alter his strategy and target the body in an effort to take the wind out his boastful opponent’s sails. The strategy worked as the body shots began taking their toll in 7th round as Gallimore started to wince whenever a clean shot landed inside.

The Philly fighter kept his foot on the gas in the eighth as Gallimore’s gas tank sputtered and the offensive output diminished. Williams nearly got the knockout he was eagerly looking for in the 11th with a rally that started with a left hook and led to a pair of uppercuts followed by a bevy of power shots that sent a weary Gallimore careening across the ring.

To his credit, Gallimore remained upright as Williams ransacked him with power shots. It was the last salvo from both fighters as the 12th round saw a pair of exhausted fighters push to the final bell.

“I didn’t really think I won the fight,” Gallimore admitted. “I just let too many early rounds go. I just gave him too many rounds. I had him hurt a couple of times, but he was tough.

“I should have done more combinations. I will look at the fight and review it, and will make adjustments. There was bad blood between us, but it’s fine now. We both gave it our all.”

It was Williams’ third victory in a row since suffering the first loss of his career to Charlo and put him in position to challenge the winner of Jarrett Hurd-Erislandy Lara. As for Gallimore, it ends a seven-fight winning streak.