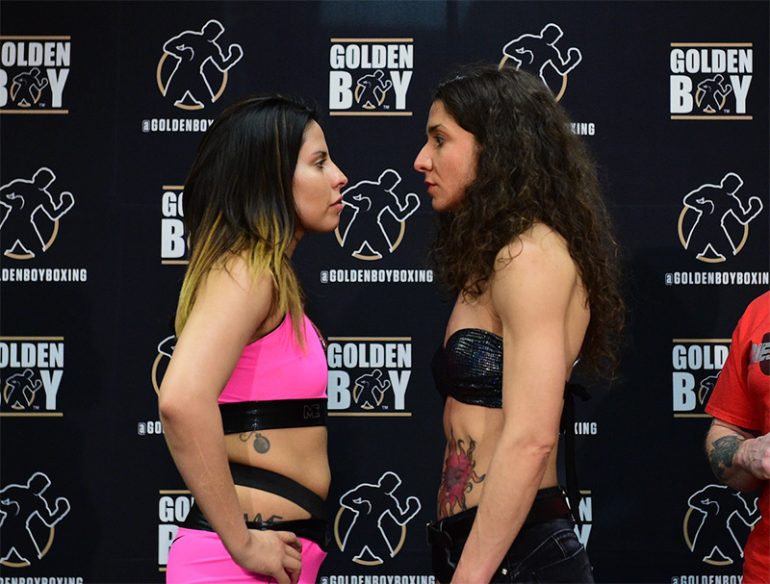 Flyweight Marlen Esparza utilized her aggression to score the first knockout of her pro career.

Esparza battered and bruised Laetizia Campana, eventually stopping her in the third round Friday night at the Belasco Theatre in Los Angeles.

Campana, who is originally from France and now resides in Philadelphia, did not offer much in terms of competition to Esparza. Campana had not fought in almost two years and will turn 41 years of age on Monday.

Esparza went right at Campana from the opening bell, landing at will. By the end of the opening round, Campana’s face showed a significant amount of bruising from the punches Esparza connected.

Campana attempted to fight back, but her punches had little effect on Esparza.

After a series of punches connected onto Campana early in round three, Campana’s corner saw enough and threw in the towel, prompting referee Zachary Young to stop the bout at 11 seconds.

“She was stronger than I thought she was, but she wasn’t strong technically,” said Esparza, who lost her younger brother a few weeks ago.

Esparza might be eyeing a grudge match against Seniesa Estrada, another unbeaten flyweight who was sitting ringside. Both Esparza and Estrada are signed to promotional contracts with Golden Boy Promotions.

Tanajara (13-0, 5 knockouts) chose to counter Ambriz during the first half of the fight, but was more aggressive from the sixth round on. Ambriz’s punch output dropped with each round and looked like he was in survival mode as the bout concluded.

All three judges scored the bout 80-72 in favor of Tanajara, who is managed and trained by Robert Garcia.

According to punch stat numbers, Tanajara connected on 117 total punches to Ambriz’s 73.

In junior featherweight action, Jose Vargas (4-0, 3 KOs) knocked out Jorge Bareaga (1-2) at 52 seconds of the opening round.