Steve Farhood on when we might see Anthony Joshua vs. Deontay Wilder 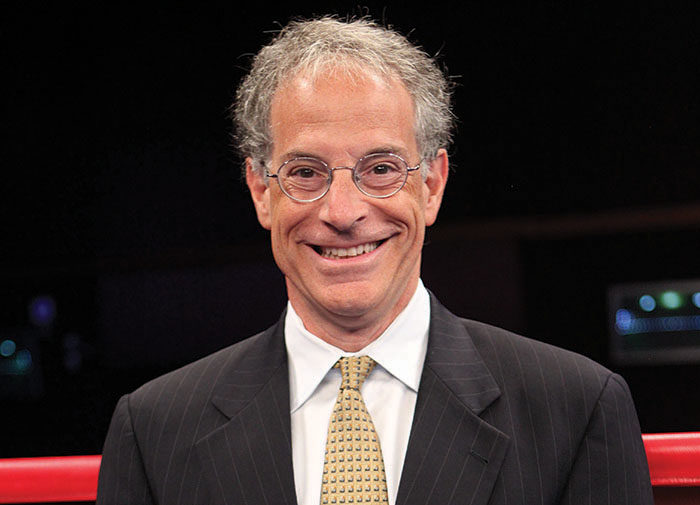 Steve Farhood is the definition of a boxing media lifer, having cut his teeth at boxing magazines, then transitioning from print to TV, his home-base being Showtime, with “ShoBox” being his prime residence at the cabler.

A nicer guy you won’t find in the sphere and his acumen is sharper than those teeth. He simply knows his stuff, going back a hundred years, and he also has a firm pulse on what’s going on today.

Farhood came on the Everlast “Talkbox” podcast, in Manhattan, and we put him on the spot, being he was in Cardiff, Wales, last week, soaking up the atmosphere and helping call the action, such as it was, between IBF/WBA/WBO heavyweight titlist Anthony Joshua and Joseph Parker. He served as unofficial scorer and saw Joshua getting a clear nod.

But about the future? Are we going to see Joshua versus WBC beltholder Deontay Wilder next? Or, Steve, will this be a marination special? Will the powers that be with the leverage edge kick that can down the road, make us wait while they marinate it and make that main event juicier (in theory)?

“You’re right; the ball is in Joshua’s hands,” Farhood said. “We spoke to Joshua, when we had a pre-fight meeting with the fighter, and (Matchroom Boxing Managing Group Director) Eddie Hearn was there for the last part of it. And it’s pretty clear; Eddie Hearn is not a stupid guy and he knows he has the leverage. The leverage in this case is, (Joshua) draws 80,000 in England. He also has an option that Wilder doesn’t have: He has a guy named Tyson Fury…He has that option. That fight is probably as big as the Wilder fight, in England.”

“Bigger,” I offered. “It’s a hundred thousand at Wembley.”

“Maybe. Fury has to sell himself a little bit. He has to show he’s a fighter again,” Farhood said.

Business is business, especially in this age, and that means the dude with the leverage is “gonna try to stick it to the other guy,” Farhood continued, so we can expect that Wilder has likely agreed to be the 40 in a 60/40 split, he noted.

The site isn’t clear-cut, Farhood said. Having the fight in England isn’t conducive for timing a U.S. pay-per-view. Having it Vegas would work for both places but we wouldn’t see that tableau of 90,000 gathered at Wembley, not to mention, Joshua loses home field advantage. Would he do it for maybe – just maybe – a fatter money pot? Does American TV hold the power it usually does? Ricky Hatton had to come here to meet Floyd Mayweather Jr…But it seems Joshua holds more cards than Team Wilder. The world has changed and America isn’t the power it once was, arguably, in the world of politics, some areas of commerce and in the realm of heavyweight prizefighting.

Furthermore, Farhood noted to us, “On the part of American fight fans, he’s not that well-known,” said the analyst of the 21-0 (with 20 knockouts) Brit. “He’s never fought here. There are pieces that have to be put into place for this fight to happen.”

(Check out the whole episode; Farhood is a great guest. He even told us that, back in the 1990s, he asked now-President Donald Trump to borrow $20 bucks. Trump reached into his wallet and handed over a bill. Did he ask for $30 back? Listen to the pod to get the answer.)

We touched on the matter of “unification” and Farhood said the two top-tier guys are obviously Joshua and Wilder, so let’s put them together and see what happens when the dust settles.

We riffed more. Might Team Joshua try to maneuver to an Joshua vs. Fury fight first? Wouldn’t that make sense, being that Fury has less power than Wilder now, and a KO loss is less of a prospect in that mega-money match?

“Wilder is consistently entertaining,” Farhood noted, and likes to fight. He really wants this Joshua bout because any alternative for him earns him 90 percent less than he makes vs. the Brit, Farhood said.

More food for thought: Farhood said, “Maybe Joshua, maybe the division doesn’t necessarily need America…They need Wilder but they may not need America. That’s a very sobering statement to make for a division for over a hundred years that has been dominated by America, both in terms of money and in terms of the best talent. It’s an example of the globalization of boxing, which we see in other divisions as well, with (unified middleweight titlist Gennady) Golovkin and (IBF light heavyweight beltholder) Kovalev and everybody else. It’s very sobering.”

Damn. I leave you with that possibility to chew on…Yes, we, in the stars and stripes, lose another piece of the empire’s foundation. To cheer yourself up, follow my Twitter feed.